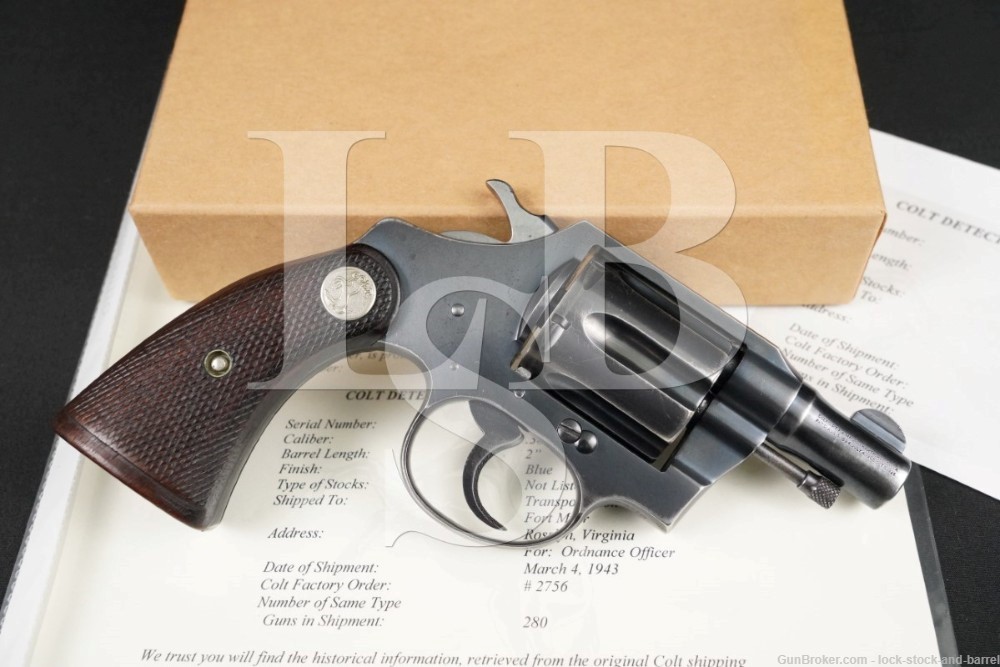 Stock Configuration and Condition: The grips are two-piece checkered walnut with silver colored Colt medallions at their tops. The grips have fairly even light handling wear with a few light nicks and scratches, mostly on the bottom of the panels. The checkering is generally well defined. There are no chips or cracks. Overall, the grips are in Very Good condition.

Overall Condition: This revolver retains about 87% of its metal finish. The finish is thinning at all edges. There is handling wear in the grip areas. There are some scattered minor nicks, scuffs and minor surface oxidation, most in the grip areas. The action shows light operational wear. The screw heads are lightly tool marked with strong slots. The markings are clear. Overall, this revolver is in Very Good condition.

Box, Paperwork, and Accessories: This revolver comes in a (modern) two-piece cardboard craft box with hand-written label and a Colt Archive letter confirming that this revolver shipped in its present configuration on March 4, 1943 to the Transportation Officer at Fort Myer in Rosslyn, Virginia as one of 280 guns of the same type in the shipment.

Our Assessment: The Detective Special had been very popular with law enforcement and civilians who carry a concealed revolver as it allowed for a six-shot revolver in the same frame size as other revolvers which only offered a five-round capacity. This example was produced during WWII and shipped to Fort Myer in Virginia. These revolvers saw use in various roles such as military intelligence and plainclothes military police.

This revolver comes from the personal collection of author Kevin Williams, best known for his exceptional work on the topic of General Officers Pistols & Clandestine Organization Pistols of WWII, a nice bonus for collectors of these types of handguns. According to his research, this revolver would most likely have seen use in either Military Intelligence or Counter Intelligence, though the documentation available stops at Fort Myer. It will make a great addition to any collection, especially one focused on Colt revolvers or military purchased sidearms. Good luck and happy bidding!