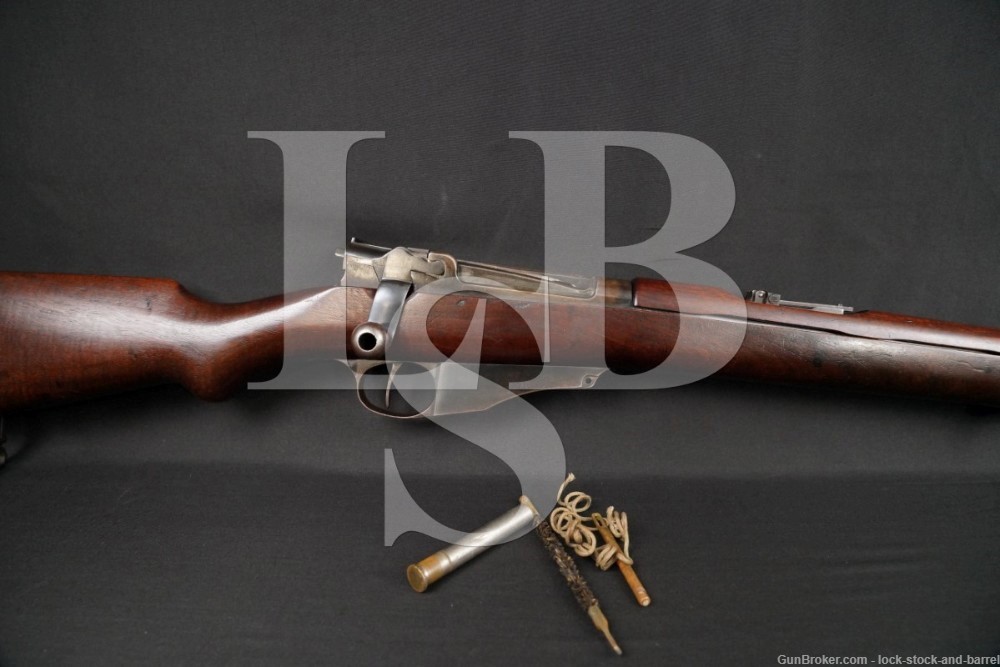 Sights / Optics: The front sight is a bladed post set under a protective hood. The rear sight is a sliding “U” notched blade assembly. When down it is a sliding elevator marked “3” and “6” on the left side of the sight base. When flipped up it becomes a sight ladder marked from “8 – 20”.

Stock Configuration & Condition: The smooth wood stock has a pistol grip, two barrel bands, a stacking loop, two sling loops and a metal buttplate with a sliding door for storage. There are some scattered nicks, dings, scuffs and scratches. There are a couple of small losses at the front edge of the magazine well. There are no cracks. The LOP measures 14 1/8 inches from the front of the trigger to the back of the buttplate. The plate has a little bit of finish on the top tang and on the door for the accessory compartment, but has mostly gone to a light patina with scattered surface erosion. The stock rates in about Very Good-Fine overall condition as antique.

Bore Condition: The bore is light gray with well defined Metford-style rifling. There is some scattered light erosion in the bore, mostly in the “grooves”.

Overall Condition: This rifle retains about 30% of its metal finish. Most exposed areas are mottled with wear, having stronger finish in protected areas such as corners and along the edges where the wood meets the metal. The worn areas show treatment with cold blue in the past, starting to go to a light patina. There is good, strong blue finish under the handguard. There are some scattered nicks, scuffs and scratches with infrequent minor surface erosion. The action shows operational wear. The screwheads show light tool marks but remain serviceable. The markings are clear. The rifle rates in Very Good-Fine condition as Antique.

Our Assessment: This Model 1895 Lee Navy Rifle was made back in 1898 by Winchester Repeating Arms. It is one of about 15,000 M1885 rifles that were made for the Navy in two contracts, the first for 10,000 rifles and this from the second contract for 5,000 rifles. Many of these rifles saw combat and this one’s condition is quite nice for its age. In 1895, it was quite high-tech, with a small caliber, high velocity cartridge, Metford rifling, and a straight-pull action with a tilting-bolt lockup. The M1895 Lee was carried aboard Navy ships for use by naval armed guards (blue jackets), landing parties, and was the standard service rifle for Marines.

Due to the smaller, lighter cartridge, the combat load was nearly double that of the Trapdoor Springfield it replaced, and during the Spanish-American war it was found that troops armed with the Lee could sustain engagements longer than most others. As far as is known, all Marine companies involved in the Cuba combat operations were equipped with the 6mm Lee rifle. In addition to service with the First Battalion, additional rifles were later distributed by navy quartermasters to elements of free Cuban forces revolting against the Spanish government. The first major combat use of the M1895 occurred during the land campaign to capture Guantánamo Bay, Cuba from June 9–14, 1898 with the First Marine Battalion, in particular at the battles of Camp McCalla and Cuzco Wells. During the battle of Cuzco Wells, Marines using the M1895 Lee effectively engaged concentrations of Spanish troops at ranges up to 1,200 yards, using volley fire against groups of enemy soldiers while their officers called out the range settings. The M1895 would see considerable action in the Pacific during the Spanish-American War and the early stages of the later Philippine–American War with U.S. Navy and Marine personnel.

The rifle saw a fairly short service life, being replaced by the 1903 Springfield when it was deemed necessary that the Army and Navy use a shared standard rifle cartridge. This example will be a great addition to a Winchester or U.S. small arms collection for the lucky winner. Please see our photos and good luck!