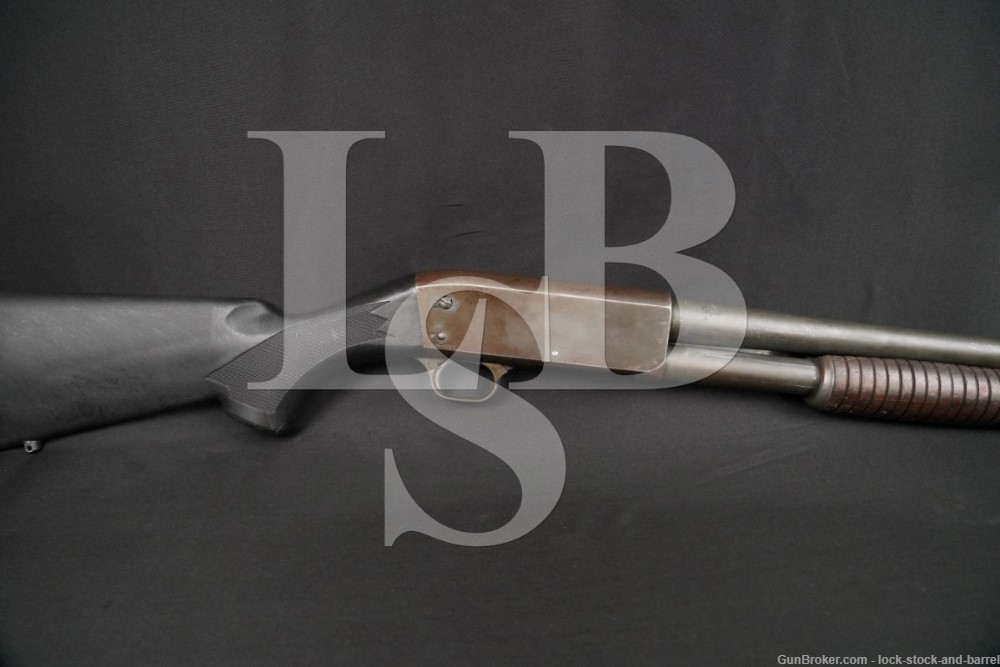 Sights / Optics: The front sight is a brass bead set on the barrel at the muzzle. The top of the receiver is serrated for glare reduction.

Stock Configuration & Condition: The forend is walnut grooved walnut. The black polymer buttstock has a checkered pistol grip, straight comb, and black rubber Ithaca buttpad. The forend has some scattered little nicks, scuffs, scrapes, and scratches. There are areas of discoloration on the forend. The buttstock has some scattered scuffs and light handling marks. There are a few little nicks on the buttstock. The most noticeable wear on the buttstock are scrapes and nicks on the grip cap which also has two small holes in it. The checkering is strong. The LOP measures 14? from the front of the trigger to the back of the pad. The pad has some light wear from use and has a few areas of yellow paint. Overall, the stocks are in about Very Good condition.

Finish Originality: Original, the barrel is not original to the receiver.

Overall Condition: This shotgun retains about 80% of its metal finish. The receiver is drifting to a patina. There are some scattered scuffs, nicks, and scratches. There are areas of thinning, some of the most noticeable are on the receiver. There are some scattered oil stains, areas of discoloration from previous oxidation, and some minor oxidation. There are a few dings into the metal, the most noticeable are on the top of the receiver. The edges have thinning and finish loss. The action shows operational wear. The screw heads are lightly tool marked. The markings are clear. Overall, this shotgun is in about Very Good condition.

Mechanics: The action functions correctly. It does NOT slam-fire. The shotgun ejects out the bottom of the receiver. We have not fired this shotgun. As with all used firearms, a thorough cleaning may be necessary to meet your maintenance standards.

Our Assessment: This is a 12 gauge Ithaca Model 87 Featherlight from the late 1980s to early 1990s, it has a 18 1/2? barrel choked Improved Cylinder. This one was used by the LAPD and has their markings on the left side. The LAPD used the Model 37 and 87 guns from the 1940s to the 1990s and it has also seen use with the Los Angeles Sheriffs Department and various military units. This is a Model 37 that was built in 1968 and since has had the non-slam fire modification performed. It has been fitted with a Model 87 Featherlight replacement barrel, all parts between the 37 and 87 are interchangeable, the only difference is the serial number. The shells eject out the bottom, making this a great option for right and left handed shooters. This shotgun is in about Very Good condition but with the amount of crazies in Los Angeles, it really doesn’t surprise us that it shows use. The mechanics are sound and the bore is bright only a couple spots of minor erosion, hardly noticeable. This ought to make for a great gun for defense but will certainly be a nice addition to a collection, especially if you’re from the City of Angels. Please see our photos and good luck!