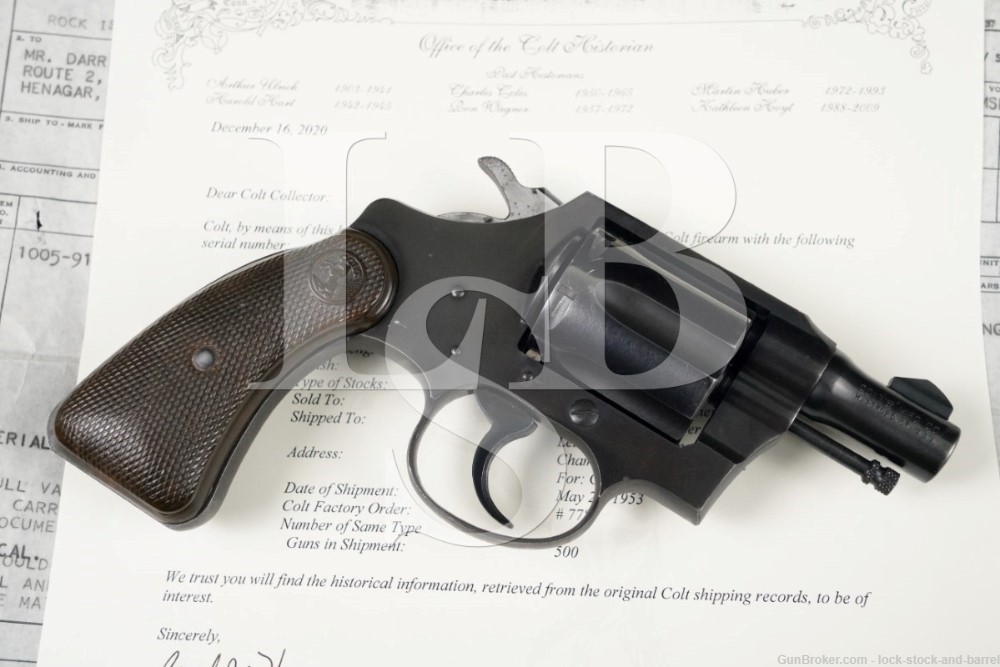 Markings: The left side of the barrel is marked “DETECTIVE SPEC. / .38 SPECIAL CTG.”, the right is marked “COLT’S MFG. CO. / HARTFORD, CT. U.S.A.” The side plate has the Rampant Colt logo at the center. The left of the trigger guard is marked “VP” in triangle at the front, and the rear is marked with a “P”. The crane and cut are marked with the serial number, “628846”.

Sights/Optics: The front sight is a serrated ramped blade fixed to the top of the barrel. The rear sight is a square-notch integral to the topstrap. The upper edges of the top strap are serrated to reduce glare.

Stock Configuration and Condition: The grips are two-piece checkered “Coltwood” brown plastic with molded rampant colt logos at their tops. The grips have shrunk some (common for Coltwood). The grips have light handling wear with a few light nicks and scuffs. The checkering is well defined. There are no chips or cracks. Overall, the grips are in Very Good condition and would rate Fine but for the shrinkage.

Overall Condition: This handgun retains about 90% of its metal finish. The finish is thinning at all edges. The grip areas show handling wear. There are some scattered nicks, scuffs, scratches and spots of minor surface oxidation. The action shows minor operational wear. The screw heads are sharp. The markings are clear. Overall, this revolver is in Very Good-plus condition.

Mechanics: The action functions correctly. The cylinder produces solid full lockup on all six chambers. The double action trigger pull is smooth. The single action pull is crisp. We did not fire this revolver. As with all used firearms, thorough cleaning may be necessary to meet your maintenance requirements.

Box, Paperwork, and Accessories: This revolver comes with a Colt letter confirming that it shipped May 29, 1953 to Letterkenny Ordnance Depot in Chambersburg, Pennsylvania as one of 500 guns of the same type in the shipment as well as a form 1149-2 from Rock Island Depot which indicates that this revolver was sold out of service (please view the photos, if we are interpreting the date codes correctly, this was done in 1970).

The model also saw military use in various roles such as military intelligence and plainclothes military police with thousands purchased by the U.S. Military during WWII. Despite still having many Colt revolvers still in inventory, during the Vietnam War in 1970, the Army bought just shy of 3,000 new Detective Special revolvers, delivered to Letterkenny Army Depot. Apparently, there was at least one shipment of 500 Detective Specials made in 1953, though their purpose is not known. This one appears to have been sold out of service in 1970, perhaps replaced by the newly purchased revolver. The revolver made its way into the collection of author Kevin Williams, best known for his exceptional work on the topic of General Officers Pistols & Clandestine Organization Pistols of WWII. This U.S. Army purchased Detective Special will make a great addition to any collection. It was purchased during a very interesting period of the Cold War, when conflict in Indochina was still a French matter, Operation Ajax helped overthrow the Prime Minister in Iran, the Korean War was coming to an end, and for whatever purpose, Letterkenny Ordnance Depot purchased 500 concealable .38 revolvers. Whether focused on Colts, military sidearms, or Cold War era small arms, this will make a nice pony to add to your stable. Good luck and happy bidding!