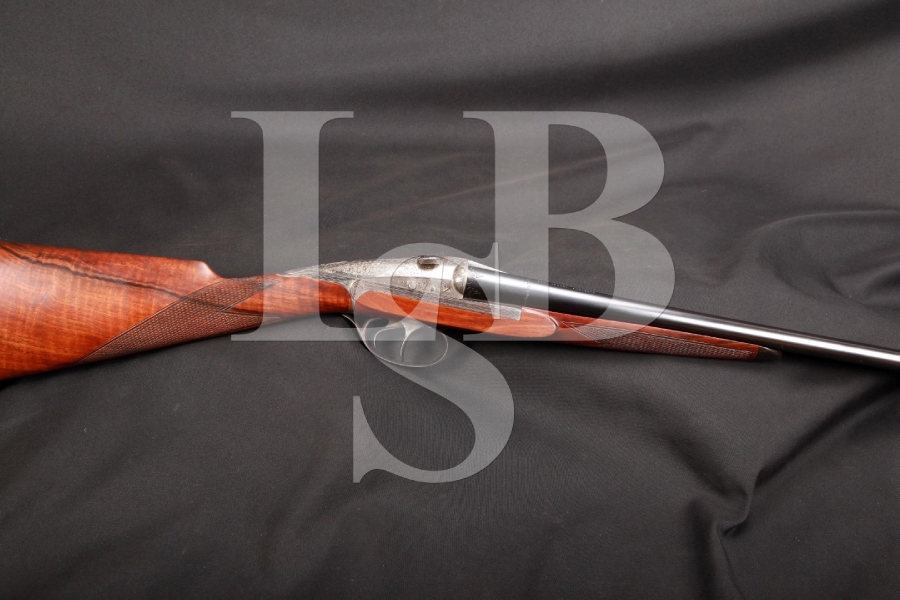 SOLD FOR :$3,363
LSB#: 141031MD41
Title: Darne Sliding Breech Side by Side 28 Gauge Shotgun
Make: Darne
Model: R15 Sliding Breech Side by Side
Serial Number: 4V 122
Year of Manufacture: circa 1975 – 1980
Gauge: 28 Gauge, 2 ¾” Shells
Action Type: Sliding Breech Double Trigger Shotgun with Extractor
Markings: The top of the right barrel is marked “FIREARMS CENTER INC. / VICTORIA TEXAS” and the top of the left barrel is marked “MADE IN FRANCE”. The underside of the right barrel is marked “4C 122” and “EPREUVE TRIPLE” over three French Proof Marks followed by “STETIENNE” and “14.0”. The underside of the left barrel is marked “NCPCJ? LAB???E” in an arch over the word “CHOKE”. The two “C”s are backwards and all the “?” are illegible characters. Following the arched choke marking is “EPREUVE TRIPLE” over three French Proof Marks followed by “STETIENNE” and “14.0”. The barrel flat is marked “IC” for the right barrel and “MOD” for the left. Each barrel has “70” followed by a Crown over “PT” on the appropriate side of the flat and the middle of the flat is marked with the “Darne” logo and five circles in a line with “DARNE” in the centers. The lever on top of the sliding breech has a small “Darne” logo and the underside of the lever is marked “4V / 122”. The underside of the sliding breech is also marked “4V / 122”. The inside of the trigger guard is marked “4V122”. The top flat of the frame where it mates with the sliding breech is marked “4V122” and with a Crown over “PT” proof. There is engraving covering at least 75% of the metal work, barrels excepted.
Barrel Length: 25 ¾”
Choke: The right barrel is choked Improved Cylinder and the left barrel is Modified.
Sights / Optics: This shotgun is mounted with a brass bead front sight.
Stock Configuration & Condition: The stocks are straight wristed in the English style with checkering at the fore end and wrist. The stock is actually two separate pieces of walnut held together by the frame and looks similar in configuration to a one piece bolt action rifle stock. There are light handling marks on the wood and there is a horn fore end tip. The LOP measures 14” from the front of the forward trigger to the back of the black Pachmayr “Old English” recoil pad. The pad is firm and has holes visible where the mounting screws are accessed. The drop at the comb is about 1 ½” and the drop at the heel is about 2 ¼”. The recoil pad rates in about Fine condition and the stocks rate in about Excellent overall condition.
Type of Finish: Blue Barrels and Engraved Coin Finished Breech and Frame
Finish Originality: All Original
Bore Condition: The bores are Bright. There is No erosion.
Overall Condition: This shotgun retains about 98% of its metal finish. The balance of the finish shows light handling marks. There is a wear mark in the finish on the underside of the right barrel about 2” ahead of the fore end and there are two lighter marks on the tops of the barrels, likely from a skeet field or storage rack. The screw heads are sharp. The markings are clear except as described. Overall, this shotgun rates in about Excellent condition.
Mechanics: The action functions correctly. The sliding breech works smoothly after you acquire a feel for it. The shells are extracted for their full length if either or both barrels have been fired. They can fall into your hand simply by tilting the shotgun to the appropriate side. We have not fired this shotgun.
Box, Paperwork & Accessories: None
Our Assessment: Although it may be the answer to an unasked question, the Darne sliding breech side by side is unique. The sliding breech mechanism was patented in 1894 and improved in 1909; the action is still being produced in France on high end shotguns and double rifles. This particular example is in 28 gauge, making it appropriate for both skeet and dove hunting. Weighing just under 5 lbs. 5 oz. it’s a lightweight, trim little side by side with a very elegant appearance. We are not experts on Darne shotguns, but believe this is an R15 model based on an off topic discussion located on this forum (http://parallaxscurioandrelicfirearmsforums.yuku.com/topic/23212/Darne-Shotgun#.VL6ouNLF9K8) in which the following statement was made: “I also have a 28ga Darne, imported by Firearms Center. Mine has a coin finish and moderate engraving. The safety is a pin that pushes in on one side for safe, back on the other side for off. I managed to contact the former importer a few years ago, a Mr. David Wayne, and he confirmed the grade and approximate import date, sometime in the mid 1970’s . . . Mine has a horn fore end tip, and Mr. Wayne says it is an R-15.” This appears to describe our example well and they are both from the same era and importer. The 28 bore is often considered the enthusiasts gauge, and this sliding breech side by side is truly an enthusiast’s delight.