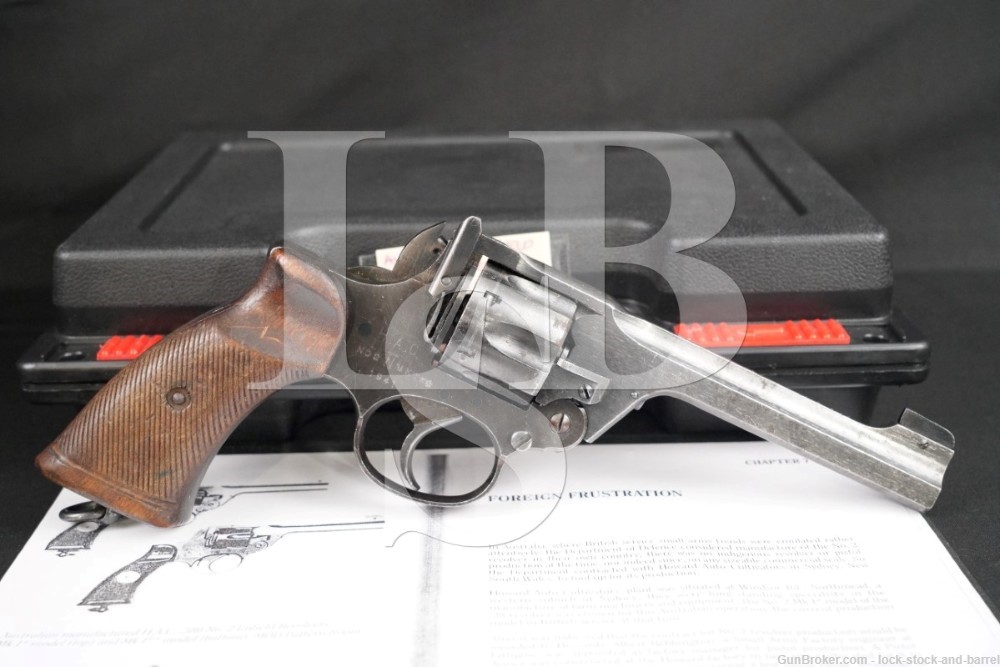 Stock Configuration & Condition: The grips are serrated wood panels with smooth thumb-rests at the top of each grip. The grips have scattered wear with some nicks, scuffs, and scratches. The top of the right panel shows a deeper scratch and the bottom of the left panel shows a slightly more notable gash. There are no chips or cracks. The serrations are generally sharp with a few little nicks. Overall, the grips are in about Good-Very Good condition.

Bore Condition: The bore is mostly bright with sharp rifling. There is some faint erosion nearer the muzzle.

Overall Condition: This handgun retains about 83% of its current metal finish. There are some light nicks, dings, and scratches evenly dispersed about the metal. There is thinning along the leading edges. There is some light erosion on the barrel, most notably along the right side. The cylinder shows similar imperfections to the rest of the metal with a distinct turnline. The action shows standard operational wear. The markings range from clear to worn or missing. The screw heads range from sharp to tool marked with strong slots. Overall, this pistol is in about Very Good condition.

Mechanics: The action functions correctly. The barrel lockup is solid and the cylinder lockup has very little play on each chamber when the trigger is depressed.  The ejector works correctly. The double-action trigger pull is smooth. We did not fire this handgun. As with all used firearms, a thorough cleaning may be necessary to meet your maintenance standards.

Our Assessment: The Enfield No. 2 revolver was in service with the British Empire from the 1930s through the 1960s. Following the Great War, it was decided that a smaller, lighter sidearm should be produced and issued. The result was the No. 2, chambered for the .38/200 cartridge (essentially a .38 S&W), a single and double action revolver produced by RSAF Enfield. As the war progressed, there were changes to the design, designated * changes. This No. 2 is an MKI**. This example was manufactured by an Australian based company called Howard Auto Cultivators. An order of 50,000 revolvers was placed, though the estimated production capacity was estimated at 37,000. In the attempt to meet this demand, many parts had to be hand finished which rendered certain parts non-interchangeable. Part interchangeability was imperative for British arms production. Needless to say, the H.A.C. failed the army trials interchangeability test and only a total of 355 revolvers were ever produced.

This revolver on display is number 106 of 355 and is in about Very good condition with sound mechanics and a nice bore. The rarity and history of this revolver makes it a must-have for a respectable WWII or British sidearm collection. Please see our photos and good luck!