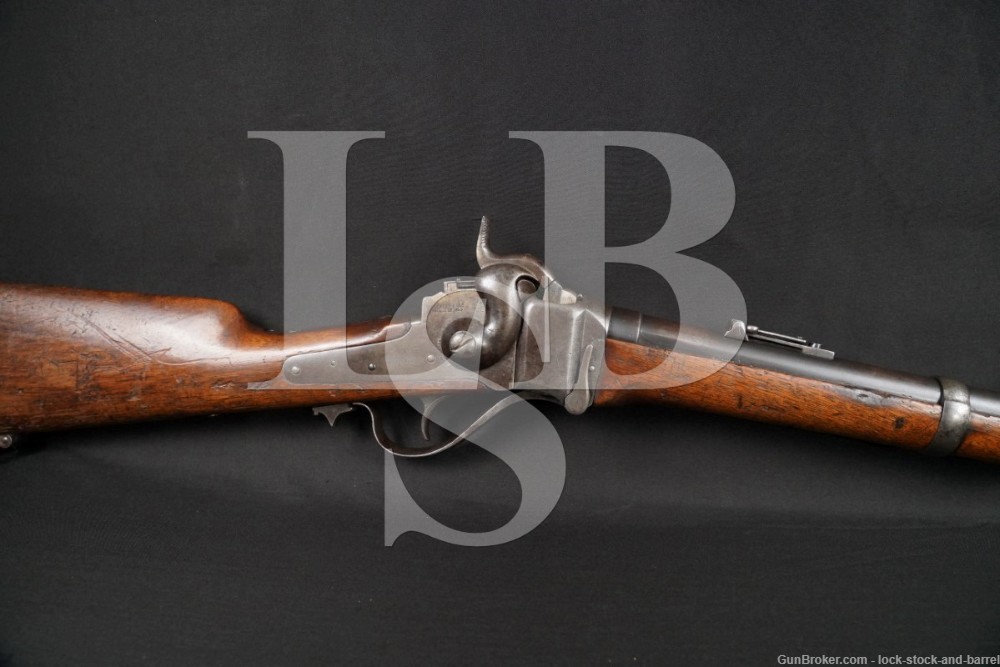 Stock Configuration & Condition: The stocks are two-piece walnut with a banded forend, straight grip, and semi-crescent steel buttplate. There is no provision for a sling bar on the left of the wrist, but there is a sling plate inlet to the belly of the stock. The stocks have scattered light-moderate nicks, dings, scrapes and scratches. There are some more notable dings on the right of the buttstock behind the lockplate, the top-right edge of the forend behind the barrel band. There is a hole in the left of the wrist and another at the toe. There is a crack at what appears to be a small knot in the right-front of the forend. There are a few short cracks around the rear edge of the butt. The LOP measures 13 5/8” from the front of the trigger to the back of the buttplate. The plate has mostly gone to a light patina with some scattered surface oxidation and light erosion. Overall, the stocks are in about Very Good condition as Antique.

Finish Originality: We know that the rifle was refinished when it underwent cartridge conversion. Based on the condition of the inspection marks, we believe it has not been refinished, since.

Bore Condition: The bore is gray and its three-groove rifling is sharp where not interrupted by erosion. There is light erosion and some minor pitting scattered through the bore with a couple of spots of more notable pits.

Overall Condition: This rifle retains about 30% of its current metal finish. The exposed portions of the barrel have a little mottled finish with most surfaces gone to a light patina. The portion of the barrel covered by the forend and band have strong blue finish, with infrequent erosion under the finish, most notable on the flats. The frame has a little bit of case color still visible, but most surfaces have muted with some discoloration from oxidation. There are scattered light nicks, scuffs and scratches. The markings range from clear to worn and incomplete, most inspection markings are crisp with raised edges. The screw heads are mostly sharp or lightly tool marked with strong slots. There is one screw head in the left of the receiver which is disfigured with a usable slot. Overall, this rifle is in Very Good condition as Antique.

Our Assessment: The Sharps New Model rifles and carbines were made in three models: 1859, 1863 and 1865. Flayderman’s indicates that over 100,000 of the 1859 and 1863 models were purchased by the U.S. Army and Navy during the Civil War, though the Navy purchased comparatively few. In fact, the Navy purchased carbines were purchased from the commercial market rather than as a contract directly with Sharps. The Sharps carbine was the most significantly utilized carbine of the Civil War: it was a single shot percussion breechloader using paper cartridge and revolutionized hand weaponry at the time.

After the war, a little over 31,000 carbines were converted to fire centerfire ammunition. Some used the original .52 caliber barrels, and those that had worn barrels were relined and chambered for .50-70 C.F. This is one of the Navy Model 1859 carbines, distinguished by its lack of provision for a sling-bar and a single sling swivel in the belly (the sling would simply be tied to the barrel at the front). The barrel was relined and converted to cartridge use as a Model 1869. This carbine is in about Very Good overall condition as Antique with about 30% of its current finish remaining. The action is tight and functions correctly, and the bore is more than decent for a 160 year old black powder rifle.

The Sharps rifles and carbines represent a great period in the history of American firearms – they participated in the last great war in which percussion rifles were used, and their post-war conversions were among the first rifles to use metallic cartridges. These rifles are highly collected, primarily because there are so few still remaining, and fewer still of the Navy carbines. This M1869 cartridge conversion will be a nice addition to any collection of Civil War or early cartridge firearms. Please see our photos and good luck!