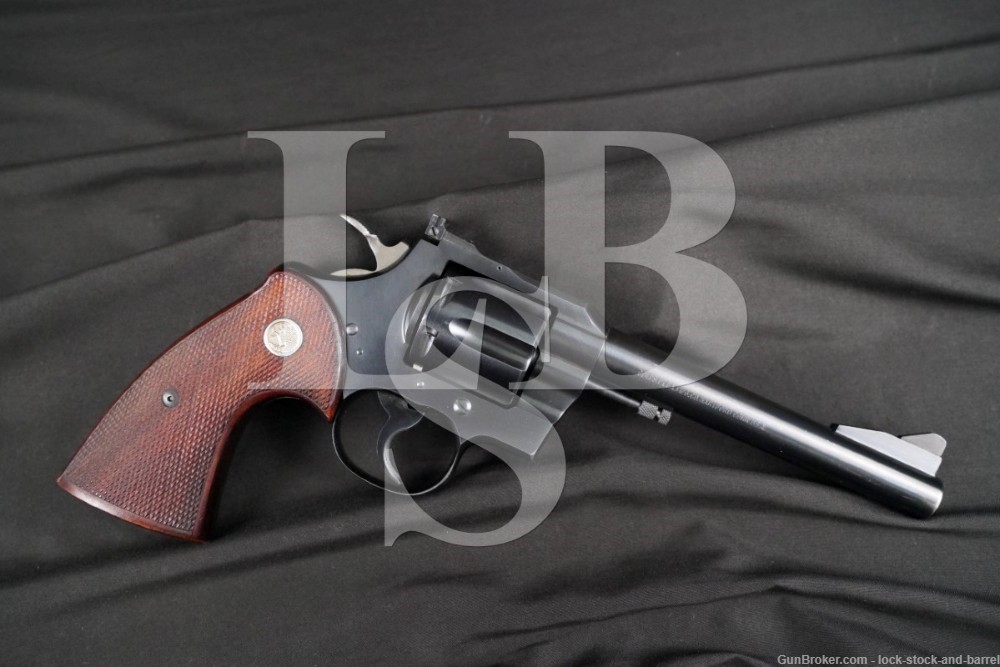 Stock Configuration & Condition: The grips are two-piece checkered walnut with silver-colored “Rampant Colt” medallions at the tops of the grips. The fit of the medallions as well as marks around their edges indicate that the grip checkering has been re-cut. The grips have only a few minor nicks. The checkering is sharp. There are no chips or cracks. Overall, the grips are in Fine-plus condition as refinished.

Overall Condition: This revolver retains about 95% of its finish. The finish is lightly thinning at some edges. There is wear and a spot of light oxidation on the left of the barrel at the muzzle with more minor wear on the right. The trigger guard has a spot of wear on the bottom-front. The backstrap has minor handling wear in its serrations. There are a few scattered light nicks and scratches. The action shows minor operational wear including a turn-line on the cylinder. The screw heads are sharp. The markings are clear. Overall, this revolver is in about Fine condition.

Mechanics: The action functions correctly. The lock-up on this revolver is SOLID on all 6 chambers. The trigger is smooth in double action, and crisp and light in single action. We have not fired this revolver. As with all used firearms, a thorough cleaning may be necessary to meet your maintenance requirements.

Our Assessment: In the early 1950’s, Colt realized that they were behind the times and didn’t have a revolver chambered for the .357 Magnum. The previous New Service model had been discontinued during WWII, and was a heavy frame, too heavy for constant carry use. Colt brushed off their medium E frame, changed it to add an internal spring-loaded firing pin and heat treated it to increase its strength, calling its new creation the “I” frame. The new gun was ready for production in 1953 and Colt called it “The Colt 357”. Colt outfitted the revolver with adjustable sights and gave it a more carefully fitted and tuned action. Colt used the old E frame for the Trooper, and gave it adjustable sights as well, chambered for .38 Special and .22 L.R. The Colt .357 was a big success, but then Colt came out with the Python, an even more upgraded revolver. Shooters who had the money went to the new Python and those who didn’t mostly bought the Trooper, leaving the Colt .357 in limbo. It was discontinued in 1961 after only 15,000 had been produced, at which time Colt moved the Trooper to the I frame and offered it in .357 Magnum as well as .38 and .22. This Colt .357 was made in 1959, just a couple of years before the model would be discontinued. It has the desirable Colt Blue finish, with a very smooth double action trigger. This example shows wear consistent with light use over the last 60 years, but still retains a great bore and strong mechanics. We think the Colt collectors will be interested, especially given the small numbers of this model produced. Please see our photos and good luck!