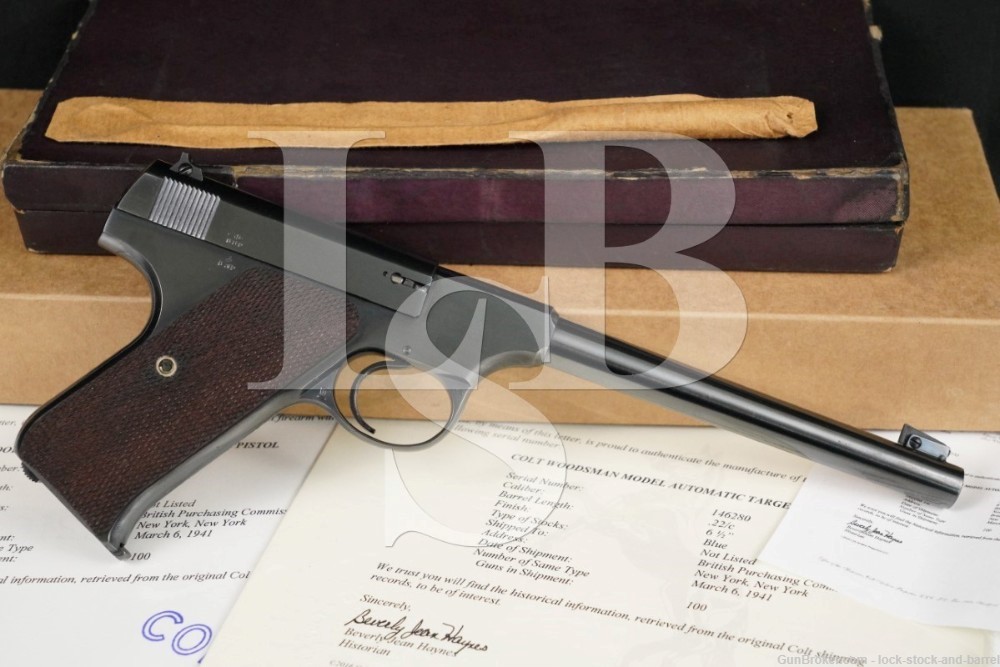 Markings: The left side of the slide is marked “COLT” and “AUTOMATIC / CAL. .22 LONG RIFLE” followed by a rampant colt. The left side of the frame is marked “THE WOODSMAN”. The top of the barrel is marked “COLT’S PT. F.A. MFG. CO. HARTFORD, CT. U.S.A. / PAT’D DEC. 22. 1903 AUG. 27. 1918 SEPT. 3. 1918.”. The front strap is marked “146280”, found again on the inside of the slide. The left front of the trigger guard is marked “T” and with a “VP” in a triangle proof, the right of the triger guard is marked “23” and at the rear with a “W” inside a crown (British Purchasing Commission inspection mark). The right of the slide and frame each have a crowned “BNP” proof. The bottom of the barrel has British commercial proof marks and a decommissioning mark as well as import-mark “GUNSHOP INC / LANCASTER CA”.

Sights / Optics: The front sight is a blade pinned to a base at the front of the barrel, adjustable for elevation. The rear sight is a square notch sight dovetailed into the slide, it is adjustable for windage.

Stock Configuration & Condition: The grips are two-piece checkered walnut. The grips show faint handling wear with some discoloration around the escutcheons. The checkering is generally sharp. There are no chips or cracks. Overall, the grips are in Fine-Excellent condition.

Overall Condition: This pistol retains about 97% of its metal finish. The proof and import marks are struck through the finish. There are infrequent tiny spots of minor surface oxidation, mostly in the grip areas. There is faint thinning at a few edges, most on the slide. The action shows light operational wear. The screw head is lightly tool marked with a strong slot. The markings are generally clear, the import mark is poorly struck. Overall, this pistol is in Fine-plus condition.

Box, Paperwork & Accessories: This pistol comes with a hinge-lid cardboard Colt box with model matching label and the serial number hand-written on the bottom, cleaning rod, manual and wax paper. A single 10-round magazine is included as well as a Colt letter which indicates that this pistol whipped March 6, 1941 to the British Purchasing Commission in New York City as one of 100 pistols of the same type in the shipment. Also included is some email correspondence from Kevin Williams discussing the significance of the “Woolwich Mark” (W inside crown) and the British proof marks. The magazine is marked “COLT WOODSMAN / CAL. 22 L.R.” on the floorplate, showing minor operational wear, intact feed lips and a strong spring. The Colt box has scattered storage wear, some repaired tears and fraying at edges.

Our Assessment: This is a Colt Woodsman 1st Series Target Model pistol made in 1941. John M. Browning designed “Colt’s Automatic Pistol, Caliber .22”, later to become the Woodsman, with the design refined slightly by Colt employees George Tansley and F.C. Chadwick before it was released in 1915. The Woodsman stayed in production until 1977. While the great majority of Woodsman pistols were sold on the commercial market for sporting purposes, there were a small number procured by the British government during World War 2.

This 1941 vintage pistol was purchased by the British Purchasing Commission in 1941, actually shipped just a few days before the Lend-Lease Act would be signed. Since 1937, American law had allowed belligerent nations to purchase goods on a “Cash and Carry” basis, that is the items had to be paid for and the purchasing nation would be responsible for actually transporting the goods. This was originally restricted with the purchase of arms prohibited, but in 1939 the law was expanded to also allow arms purchases in this manner. The British Purchasing Commission was set up in New York City to arrange for payment and transportation of good purchased under the Cash and Carry policy, and arms which went through the BPC would be marked with a “W” inside a crown to show they had been inspected, now known to collectors as the “Woolwich Mark”.

It is not immediately clear what purpose the British government had with the Colt Woodsman, but they were desperate for arms and purchased just about whatever they could from Colt. Most of the BPC purchases were for the Home Guard, and its possible that the Woodsman was to be used for marksmanship training. That said, there’s a photo going around of a Special Operations Executive armory where it appears there are a few Woodman pistols handing on the wall. The SOE could certainly have had some purpose for the Woodsman as well. This example is in Fine-plus overall condition, retaining the vast majority of its original finish and showing wear consistent with little use over the last 80 years. The bore is bright with strong rifling and no erosion. The pistol also comes with its original Colt box and a Colt letter confirming its purchase by the BPC. Even better, this pistol comes from the collection of author Kevin Williams, best known for his exceptional work on the topic of General Officers Pistols & Clandestine Organization Pistols of WWII. In all, this is a wonderful Woodsman to add to any collection, whether your interest is in Colts generally or WWII handguns. Please see our photos and good luck!