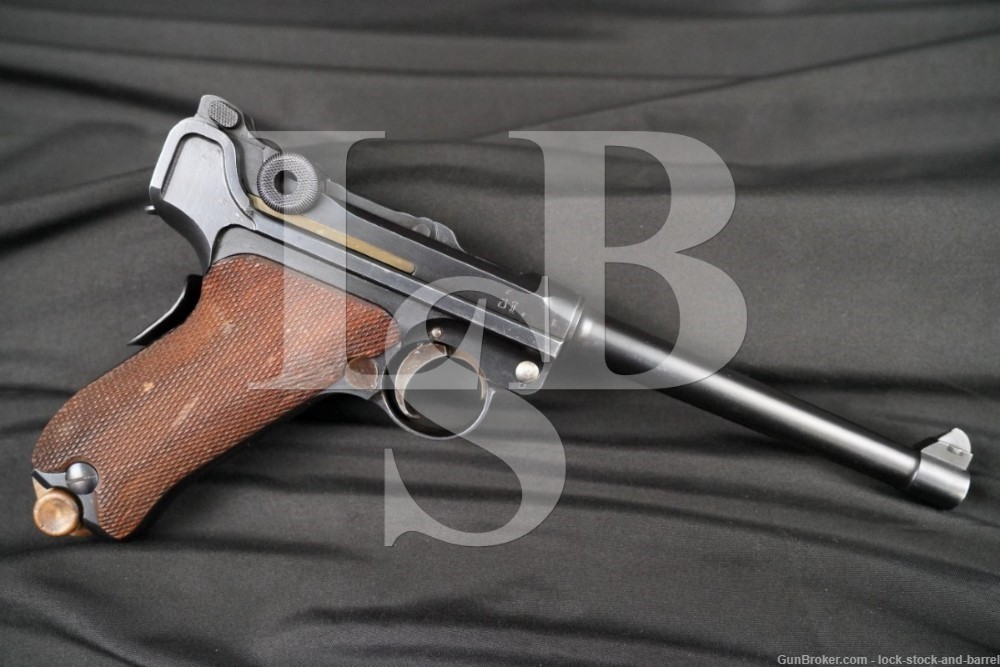 Sights/ Optics: The front sight is serrated blade fixed to a banded base fixed to the muzzle. The rear sight is a “V”-notch integral to the rear toggle link which in its default position is configured for firing at 100 meters and can be adjusted for fring at 200 meters.

Stock Configuration & Condition/ Grip: The grip panels are two-piece checkered wood. The grip panels have scattered light-moderate handling marks, nicks, compressions and scuffs. The wear is concentrated on the right panel. Notably, the right grip panel has a compression on the top front portion of the panel and a notable nick and scuff at the center of the panel. There are no chips or cracks. The checkering is mostly sharp. Overall, the grips are in Very Good condition.

Bore Condition: The bore is semi-bright with mostly sharp rifling. There is erosion concentrated in the grooves.

Overall Condition: The pistol retains about 90% of its metal finish. There are some light handling marks, nicks and scuffs on the gun’s metal surfaces. Notably, there is some light finish loss around the leading edges, light wear on the muzzle and some light wear on the trigger side plate. Also, there is some light pitting visible under the blue finish on the breechblock and a few other small parts. A few markings are slightly faded, but most remain clear. The screwheads are unmarred and serviceable. Overall, the refinished pistol is in Very Good condition.

Box Paperwork and Accessories: The pistol comes with a single magazine that has a wood base. The magazine has some light handling wear and remains in Very Good condition.

This is a Pistole P.04, 1906 variation Naval Luger which was manufactured sometime between 1908-1914. The gun has been force matched sometime after WWI with a frame that features the archaic grip safety which was removed from the P.04 when the 1908 variation of the pistol was introduced. The slide is marked with the date code 1918 (per Jan C. Still’s Imperial Lugers and Their Accessories the P.04 Naval Luger’s production ended in 1917) which indicates the gun was either refurbished that year in a German arsenal or reassembled from spare parts taken from several Lugers well after WWI ended. The front toggle is marked with an Erfurt Arsenal marking; it does not appear to be an original component. While this is not a P.04 Naval Luger in its original configuration, it is still a beautiful pistol nonetheless. It remains an aesthetically pleasing, ergonomic and mechanically sound handgun which is sure to impress. The two position rear sight and P.04 barrel add to the gun’s charm. This is a well constructed old pistol that Luger fans will not want to miss out on!