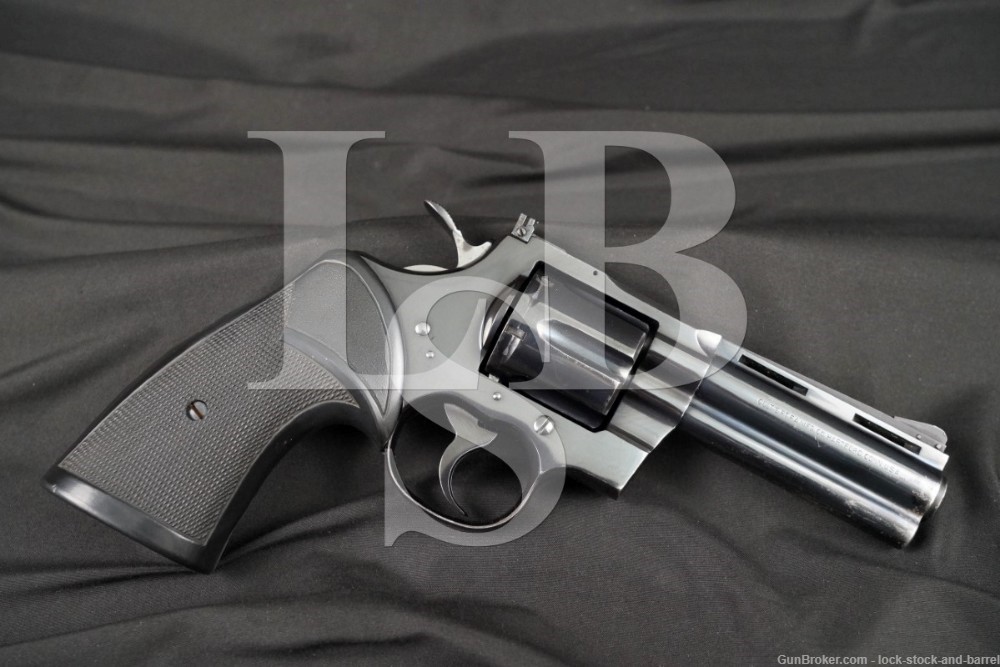 Barrel Length: The vent rib barrel with full underlug is 4”.

Stock Configuration & Condition: The grip is a checkered black rubber Pachmayr Presentation grip. We were not able to remove the grip from the frame without risking damage, it is unclear if it has been glued in place, but that appears to be the case. Otherwise, the grip shows only a few light marks in the smooth borders. The checkering is well defined. There are no rips or tears. Overall, the grip is in about Fine condition as stuck on the frame.

Overall Condition: This revolver retains about 87% of its finish in the portions not covered by the grips. The finish is thinning at all edges. There is light finish wear at the muzzle on each side. The barrel and its lug have some scattered spots of finish loss which appear as though minor oxidation was scrubbed out. The cylinder has a spot of finish wear near the front between two of the flutes, opposite this is an odd void in the finish with crisp edges. There are a couple of spots of surface erosion visible on the crane hinge when the cylinder is closed. The side faces of the hammer have discoloration from oxidation. There are a few light nicks and scratches. The action shows operational wear including a turn-line on the cylinder. The screw heads range from sharp to tool marked with strong slots. The markings are clear. Overall, this revolver is in Very Good condition.

Mechanics: The action functions correctly. The lock-up on this revolver is SOLID, with no play when the trigger is depressed. The trigger is smooth in double action, and crisp in single action. We have not fired this revolver. This revolver has a wide target style hammer and a serrated trigger.

Our Assessment: In 1955, the United States launched the first nuclear powered submarine, West Germany joined NATO, and Colt began shipping the finest precision combat and target revolver ever made. Each revolver was hand-tuned at the factory and this attention to detail shows both cosmetically and in operation. With barrel lengths ranging from 2.5? to 8? and with some of the finest machining and finishing ever seen in the industry, the Python has earned its reputation and continues to be sought after to this day. The Colt Python revolvers are no longer being made like the originals, so the price for these fantastic weapons are just going to continue to appreciate. The revolvers by themselves are becoming harder and harder to find, making it difficult to bring oneself to actually fire a Python. This revolver is a 4? example which appears to have seen use over the last 50 years. It has been equipped with a Pachmayr grip which is stuck on the frame. The exposed portions of the gun show operational and handling wear, appearing to have had some light oxidation removed in the past. It still retains a great bore and strong mechanics. This will make for a nice Python you can add to your collection and actually take out shooting without feeling like you’re ruining a pristine collector’s piece. Please see our pictures and good luck!