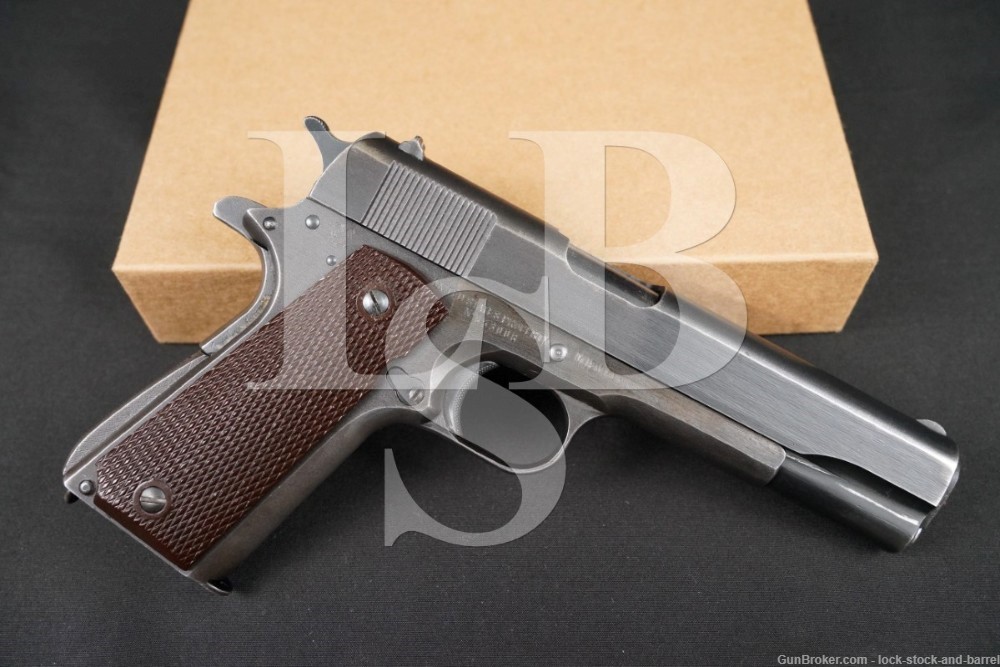 Serial Number: 953008 (Please note, this serial number falls in a range which was used by both Remington Rand and Colt. The lack of Colt’s verified proof as well as the “FJA” inspector’s mark indicate that the frame was made by Remington Rand.)

Finish Originality: Most remaining finish is Original. The right of the frame has been touched-up around where the “U.S. ARMY” marking was removed.

Bore Condition: The bore is gray. The rifling is well defined, sharp where not interrupted by erosion. There is scattered light-moderate erosion and some light pitting in the bore.

Overall Condition: This pistol retains about 80% of its metal finish. The finish is thinning at all edges. The most notable finish loss is on the right of the frame, where the “U.S. ARMY” marking was removed and the surrounding area was touched-up. There is handling wear in the grip areas and the action shows operational wear including on the chin of the slide. There are a few light nicks, scuffs and scratches. Some of the worn areas show minor discoloration from oxidation, again most notable in the area where the marking was removed. The screw heads range from sharp (and likely replaced), to tool marked with strong slots. The markings are clear where not intentionally removed. Overall, this pistol is in Very Good condition.

Box, Paperwork & Accessories: This pistol comes in a two-piece cardboard craft box with a single 7-round magazine. The magazine has operational wear, some minor surface oxidation, intact feed lips and a strong spring.

Our Assessment: The 1911 and 1911-A1 pistols served the military of the United States from 1911 to 1985, through two World Wars and the Korean and Vietnam wars. They gained a reputation as a reliable handgun with plenty of stopping power, and are held in high regard by those who have used them. As was the case at the outset of the 1st World War, demands of the US Military would outstrip the production capacity of Colt when the United States entered World War 2. In this case, contracting pistol production out to other companies had been planned for and simplified due to educational orders and a production study, notably conducted by the Singer sewing machine company, which developed comprehensive plans and instructions for a company which had never made a 1911A1 to order materials, machinery and set up manufacturing for the pistol.

Remington Rand was the star example of this project’s success, and by the end of the war would go on to produce just about as many as all of the other maker’s combined, at the lowest price and highest quality. This example was made by Remington Rand in 1943 and is an interesting example of a Remington Rand 1911-A1. The pistol is in Very Good condition, retaining about 80% of its finish, a fair bore and strong mechanics. It also appears to have had an interesting life.

The left of the frame, under the grip panel, has markings scribed which we believe indicate it was seized as evidence by police at some point. Additionally, the frame has had its “U.S. ARMY” marking removed. While it is not all that uncommon to have the “U.S. PROPERTY” marking removed by owners who mistakenly believed it was illegal to possess items so marked, removal of the Army marking is not something we’ve seen on a 1911A1. Additionally, this pistol comes from the collection of author Kevin Williams, best known for his exceptional work on the topic of General Officers Pistols & Clandestine Organization Pistols of WWII. This would make a nice addition for a collector who wants to add a Remington Rand to a 1911 or WWII small arms collection, especially if you want to tease out the significance of the markings that have been added and removed. Please see our photos and good luck!