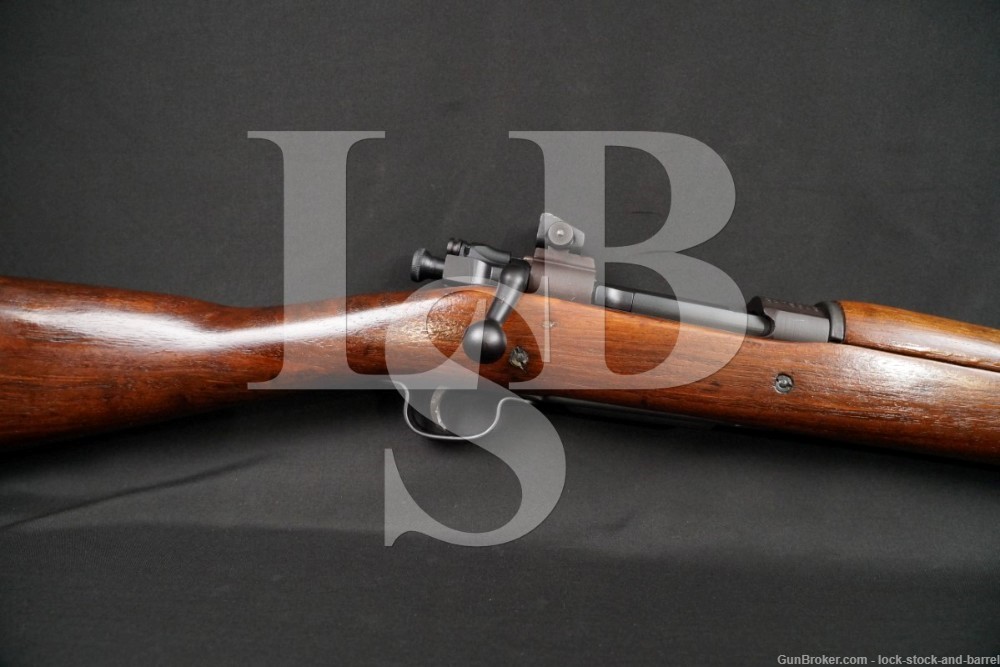 Markings: The top of the receiver is marked “U.S. / REMINGTON / MODEL 03-A3 / 3878349”. The top of the barrel is marked “R A / flaming bomb / 6 – 43” and the bottom is marked “P”. The safety is marked “SAFE READY” and the magazine cutoff is marked “ON OFF”. The underside of the bolt handle, safety lever, nosecap and stacking loop are marked “R” for Remington. The front sight cover is marked “C64157-4” and “G in a triangle”. The left side of the stock, above the trigger, is marked with “RA” (Remington Arms), with a “crossed cannons” cartouche and with an inspector cartouche “FJA in a box”. The left side of the butt is marked with an Arsenal Rebuilt stamp from the Rock Island Arsenal “RIA / EB”. The right side of the butt is stamped with the last 4 digits of the serial number.

Sights / Optics: The front sight is a pinned blade set atop a raised base and under a removable protective hood. The rear sight is a fully adjustable aperture sight marked from “2-8” on the top and “0” with hash marks on the rear.

Stock Configuration & Condition: The hardwood stock has a straight grip, metal nose cap with bayonet lug, stacking loop, 2 barrel bands, 2 sling loops, 2 through bolts, and a metal buttplate with hinged door for storage. The refinished buttplate has small scratches and surface erosion showing through the new finish. The wood shows scattered scrapes and scratches. Most of these marks have been finished over. The LOP measures 13 inches from the front of the trigger to the back of the buttplate. The stock rates in about Fine overall condition as refinished.

Bore Condition: The rifle uses a 2 grooved bore. The muzzle and grooves are semi bright. The remaining lands are bright. The rifling is sharp. There is fouling at the muzzle and in the grooves. It should clean up some. There is also some light intermittent erosion near the muzzle. The bore shows an M.E. of 0.5.

Overall Condition: This rifle retains about 97% of its metal finish. The metal shows scattered scuffs, light scrapes, and small scratches. The screw heads show use. The markings on the metal are deep. The markings on the wood are somewhat faded. Overall, this rifle rates in about Fine condition as refinished.

This Remington Model 1903-A3 was made back in 1943. At some point it was Arsenal Rebuilt at the Rock Island Arsenal and is marked accordingly on the stock. The metal and wood have been refinished so the rifle looks great for being almost 80 years old. It has nice Remington markings on the receiver and barrel as well as small “R” stamps on some of the metal parts. There are also markings on the stock which are somewhat faded due to refinishing. This Remington Model 1903-A3 still has a strong bore so it should do well at the range. It will add to your WWII or Military collection.  Good luck.