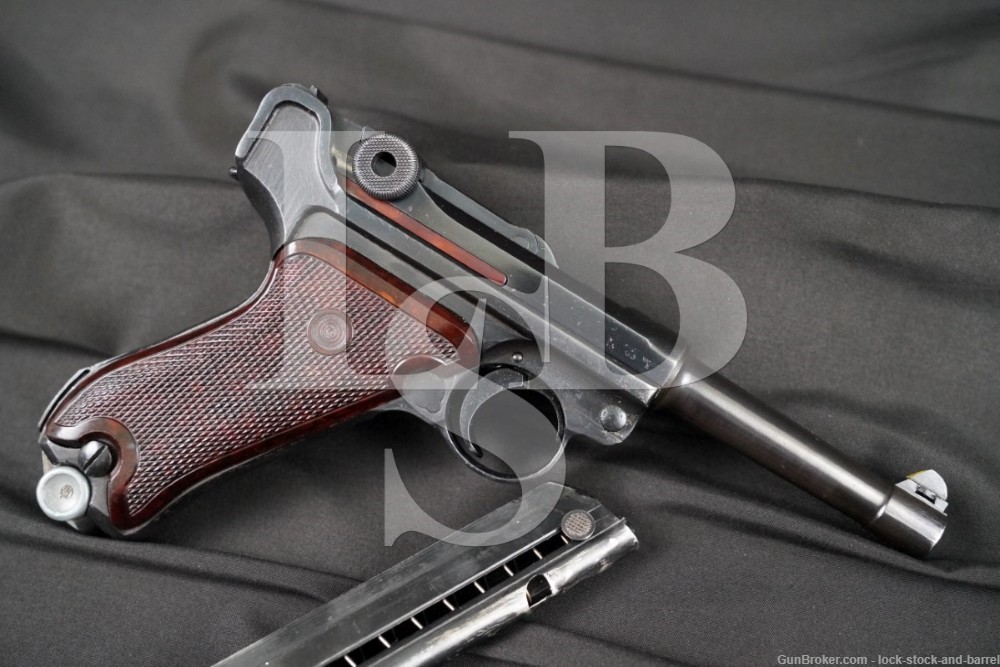 Sights/ Optics: The front sight is serrated blade fixed to a banded base fixed to the muzzle (the portion of the front sight facing the user is marked with discolored white paint, it now has a tan hue). The rear sight is a “V”-notch integral to the rear toggle link.

Stock Configuration & Condition/ Grip: The grip panels are two-piece checkered synthetic with target logos. The grip panels have some light handling marks but lack any notable defects. There are no chips or cracks. The checkering remains sharp. Overall, the grips are in Fine condition.

Bore Condition: The bore is semi-bright with mostly sharp rifling. There is some erosion concentrated in the grooves.

Overall Condition: The pistol retains about 90% of its metal finish. There are some light handling marks, nicks and scuffs on the gun’s metal surfaces. Notably, there is some light finish loss around the muzzle, the trigger side-plate and on the left side of the frame, just ahead of the trigger side-plate. Also, there are a few scattered patches of light pitting visible under the finish. A few markings are slightly faded, but most remain clear. The screwheads have light tool-marks but they remain serviceable. Overall, the pistol is in Very Good condition.

Mechanics: The receiver axle fits a bit loosely into the rear end of the slide. Otherwise, the action functions correctly. There is light play between the barrel assembly and frame. We did not fire this pistol. As with all used firearms, a thorough cleaning may be necessary to meet your maintenance requirements.

Box Paperwork and Accessories: The pistol comes with two magazines. The base of each magazine is serial matched with one marked “1” and the other “2”. The left side of the magazine numbered “2” on the base, under the serial number, is marked “2/1001”. The magazine marked “2” on the base has been force matched and has a struck out “7” still visible adjacent to the serial number.

This Luger appears to largely be in its original configuration with a few replacement parts added to it when it was refurbished by the East German government. The gun was originally manufactured in 1939, but its service history did not end with the conclusion of WWII (the gun’s origin is evidenced by the date code on the chamber ring and “42” marking on the front toggle which was used by Mauser from 1939-41). The gun was eventually refurbished for service with Volkspolizei  (literally people’s police) of the Deutsche Demokratische Republik (DDR; East Germany). These Lugers generally feature force matched parts (a practice that was common in the Former Eastern Bloc), DDR proof marks (see the proof mark on the left side of the slide) and often feature an “X” (this gun has no “X” marking, but has the other distinct features seen on Volkspolizei P08s). Lugers issued to the Volkspolizei had synthetic grips with a target logo, this gun has such grips. The gun still has a eagle clutching a swastika on the left side of the breechblock, a marking which was typically removed during refurbishment (although it is only visible when the gun is taken down and the visible NSDAP eagle on the right side of the slide has had its swastika defaced. It should be remembered that the refurbishment process was imperfect and such a small detail likely did not greatly trouble the factory worker who was stuck working on the gun. This gun is very well preserved with a strong blue finish and clear markings. The gun is both ergonomic and mechanically sound with two magazines. This is a great option for fans of the Luger and it is a relatively more uncommon Volkspolizei variant. Good luck on your bid!