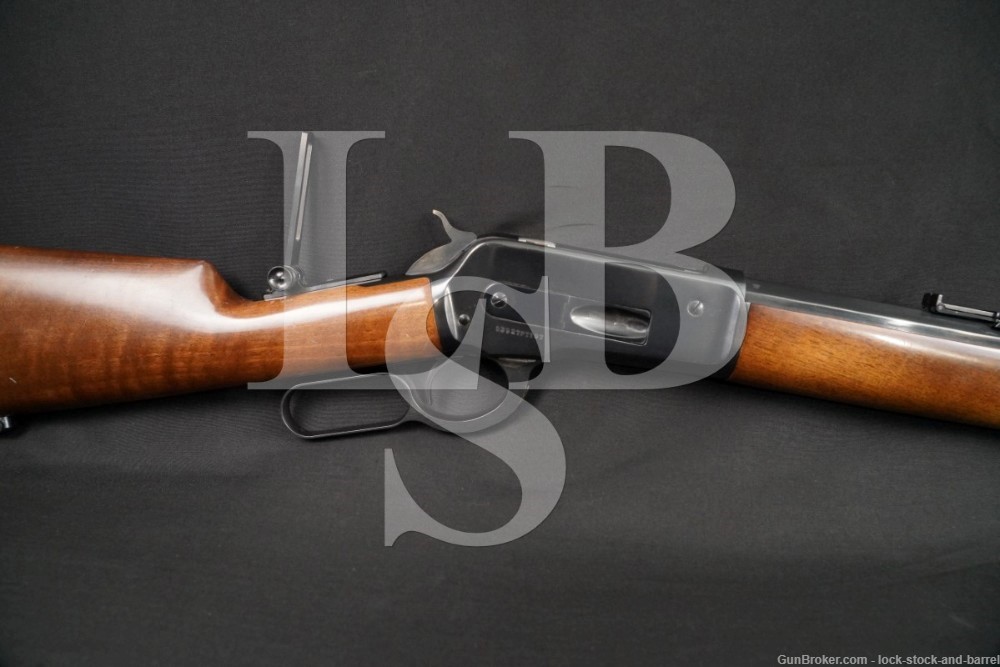 Make: Made by Miroku for Browning

Stock Configuration & Condition: The stocks are 2-piece smooth walnut with capped forend, straight grip, straight comb and blued steel crescent buttplate. There is a sling swivel in the belly and one banded to the magazine tube. The stocks have scattered minor compressions, draglines, and light handling marks. There are some notable scratches on the left side of the wrist. There are no chips or cracks. The LOP measures 13? from the front of the trigger to the back of the buttplate. The plate has no notable wear or damage. Overall, the stocks are in about Very Good-Plus condition.

Overall Condition: This rifle retains about 92% of its metal finish. There is thinning on the leading edges of the receiver, around the muzzle, on the loading gate, and on the inside of the lever loop. There is a patch of erosion on the front of the lever. The nose cape shows a faint plum hue. There are some faint nicks and scratches on the sides of the receiver as well as throughout the barrel. The screw heads are sharp, the front screw from the tang sight is missing. The upper tang was drilled and tapped to receive the tang sight. The markings are clear. Overall, this rifle is in Fine condition.

Our Assessment: This is a Browning model 1886, a reproduction of the original Winchester which was, ironically, designed by John Browning. The 1886 followed up the 1876, providing a much stronger action which was able to withstand larger and more powerful cartridges such as the .45-70, the issue rifle cartridge of the U.S. Army at the time. The design would later be shrunk for the model 1892. This modern reproduction has the same action and was produced as a limited edition for the centennial of the 1886 in 1986 with only 7,000 Grade I rifles made and an additional 3,000 High Grade rifles. This one has certainly been shot but has also been well cared for, in Fine condition. With its 26? octagonal barrel and .45-70 chambering, this would make a nice hunting rifle that could take just about any game in North America, though it’s a bit heavy for taking it on a long stalk and in such high condition, it will likely see interest from both Browning and Winchester collectors. If you’re looking for a .45-70 lever gun, you can’t do much better than this. Please see our photos and good luck!