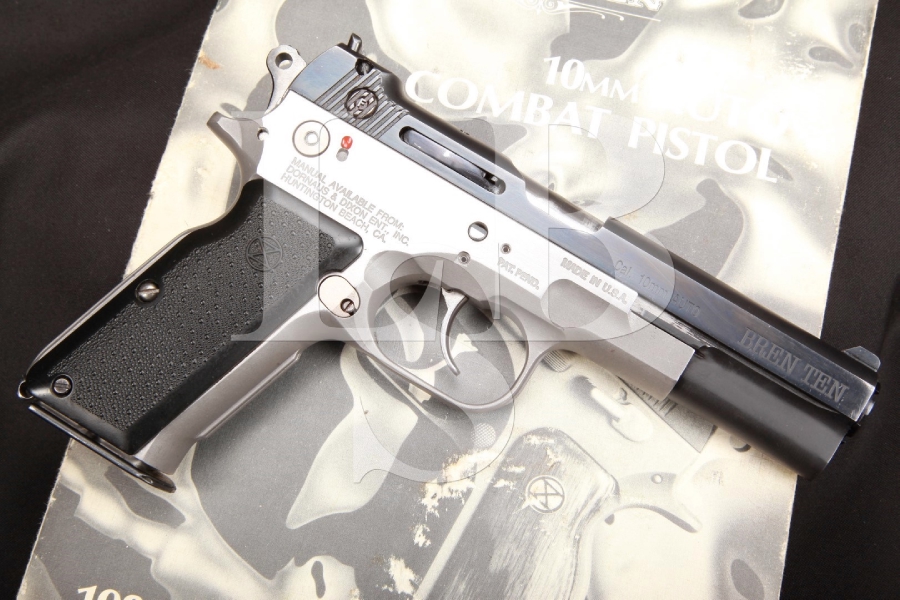 LSB#: 141212SF03
Make: Dornaus & Dixon
Model: SFL marked Standard Bren Ten
Serial Number: 84SFL0364
Year of Manufacture: 1984 ATF Classified C&R
Caliber: 10mm
Action Type: Traditional Double Action Semi-Automatic (DA/SA) with Removable Magazine
Markings: The left side of the slide is marked “BREN TEN” with an “S” on the firing pin block. The top of the slide is marked “CAUTION-READ MANUAL” between the ejection port and the rear sight. The right side of the slide is marked “BREN TEN”, “Cal. 10mm AUTO” and with an “F” on the firing pin block. The underside of the slide is marked “154” towards the rear. The barrel is marked “Cal. 10mm AUTO” over the chamber area. The left side of the frame is marked “84SFL0364” and with the Gunsite Raven. The frames right side is marked “MADE IN U.S.A.”, “PAT. PEND.” and “MANUAL AVAILABLE FROM: / DORNAUS & DIXON ENT., INC. / HUNTINGTON BEACH, CA.”
Barrel Length: 5”
Sights / Optics: The front sight is a ramped blade with a white dot. The front sight is pinned through both the slide and the barrel bushing. The rear sight is a square notch with two white dots. The rear sight is adjustable for windage and elevation by means of two slotted screws.
Stock Configuration & Condition: The grips are Hogue combat grips made of fiberglass reinforced nylon. They have a pebbled texture and a Bren Ten “X” medallion. The grips show handling marks and the bottom of the right grip panel has a series of light scratches. The grips rate in about Fine overall condition.
Type of Finish: Blue Slide, Brushed Stainless Steel Frame
Finish Originality: All Original
Bore Condition: The bore is semi-bright and the rifling is intact. “The Bren Ten employs “power seal” rifling as developed by Barret Boots Oberineyer. Unlike conventional rifling which is cut at a ninety degree angle to the bore, the Power Seal rifling is cut at a shallower angle. This sloped surface increases the area available to guide the bullet and is reported to have a number of beneficial effects. First the bullet is less deformed so accuracy is improved. As the bullet seals the bore more completely very little gas escapes hence higher velocity.” (Paraphrased from the article “Peregrine Falcon” by Nigel Milner in the Jan/Feb 1991 issue of “Guns & Weapons” magazine.) There is some very light erosion in the bore.
Overall Condition: This handgun retains about 94% of its metal finish. The slide shows loss from use in the grooves that engage the frame. There is thinning at the muzzle, the rear gripping serrations and on the extractor spring. There are at least seven spots of what appears to be a chemical loss along the left side of the slide’s top and a light scratch through the finish on top of the main body of the rear sight. The frame shows handling marks and wear marks at the slide stop lever and safety lever. There are even some wear marks on the frame’s right side as if the safety has been switched to that side for a brief time. The grip screw heads and sight adjustment screw heads are sharp. The markings are clear. Overall, this handgun rates in about Fine condition.
Mechanics: The double and single actions function correctly. The firing pin block and the safety lever work smoothly. This pistol has the trigger stop installed in the trigger guard and has two holes at the safety, on each side of the frame. The slide has a round top, including the portion where the Warning is marked. We did not fire this handgun.
Box, Paperwork & Accessories: One 10-round magazine is provided. It is marked on both sides “10 mm / .40 cal.” The right side of the magazine body is marked 3 through 10 and has three witness holes, located between 3-4, 6-7 and 9-10. The magazine shows wear from insertion and removal, rating in about Fine condition. Also provided is a 1983 Dornaus & Dixon Bren Ten Catalog. The catalog shows wear and aging, with a ½” tear through all the pages on the side opposite the binding. The front and rear covers each have a 1/8” hole through the paper, as well as some abrasions and some small stains. The catalog rates in about Very Good overall condition.
Our Assessment: There is a lot of mystique surrounding the Bren Ten semi-automatic 10mm pistol. Col. Jeff Cooper is listed as “the conceptual designer and technical adviser on the Bren Ten Program” (per the 1983 catalog.) Based on the CZ-75, it can be double action on the first shot with second strike capability as well. It is also capable of being carried “cocked and locked” as a single action pistol in the manner of a 1911. Although it shares features in common with the 9mm CZ-75 and the .45 ACP 1911, the Bren Ten is chambered in the more powerful 10mm cartridge. “The Bren Ten was conceived by Jeff Cooper as the ultimate combat pistol and engineered and developed by Dornaus & Dixon Enterprises” (again, per the 1983 catalog.) Its arrival was eagerly anticipated, but was never the commercial success it designer and manufacturer had hoped. The Bren Ten was used by Don Johnson’s character Sonny Crockett during the first two seasons of the TV show “Miami Vice” which helped increase its visibility and desirability. The example in this auction has an “84SFLxxxx” serial number, which should indicate that it would be a Special Forces Light model, all of which to our knowledge have barrels of less than 5” in length. Despite having the “84SFL” serial number, this example appears to us as a Standard Model, full size, 5” barrel, stainless steel frame with blue slide. This pistol comes with one magazine, but it is not clear to us whether this is a factory or aftermarket version. The 1983 Bren Ten Catalog is clearly an original, not a reprint. From 1983 to 1986 a total of only about 1,500 Bren Ten pistols were manufactured in various models, making them a limited production, collectable and highly sought after pistol. Don’t miss this chance.