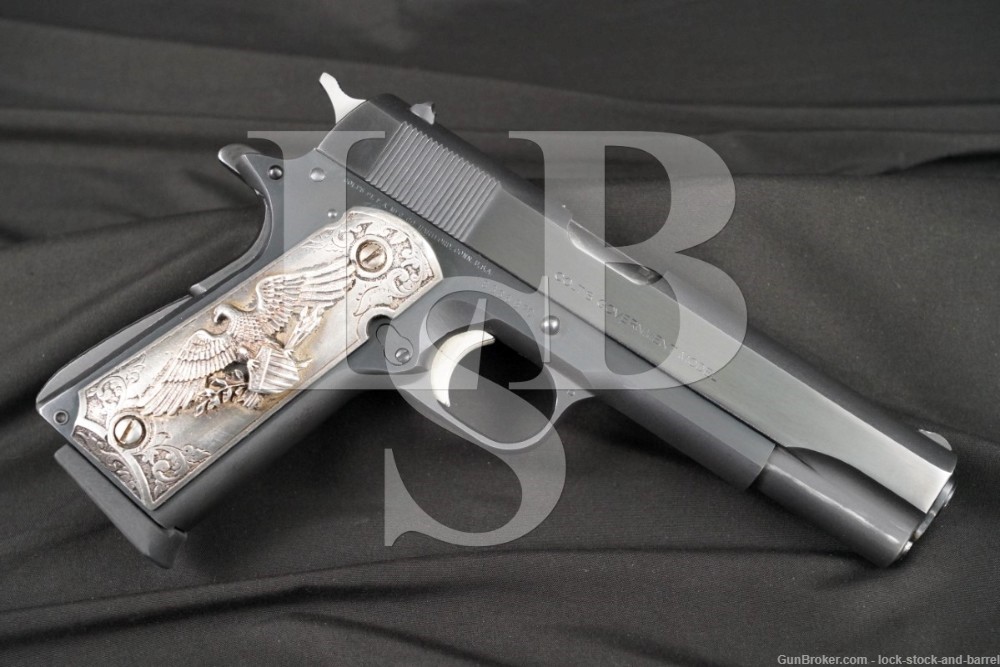 Stock Configuration & Condition/ Grip: The grips are Sid Bell two-piece pewter panels with sculpted American eagles and scroll engraving. The grips have some scattered minor scuffs and scratches with a couple of more notable nicks. There is scattered discoloration. There are no chips or cracks. Overall, the grips are in Very Good condition as not original to the gun.

Please note: The bottom-right grip screw is seized in its bushing, turning the screw head turns the bushing in the frame. The bushing and frame have strong threads, but we were not able to remove the screw from the bushing.

Overall Condition: The pistol retains about 95% of its finish. The finish is thinning at some edges. There are some scattered minor nicks, scuffs and scratches, most notable in the frontstrap. The action shows operational wear, most notable on the right of the slide in front of the dust cover. There is light wear and minor oxidation on the left of the frame under the grip panel. The screw heads are tool marked with strong slots. The bottom-right grip screw is seized in its bushing. The markings are clear. Overall, this pistol is in Very Good condition.

Mechanics: The action functions correctly. The slide has light play to the frame. The trigger is crisp. We did not fire this pistol. As with all used firearms, it may need a thorough cleaning to meet your maintenance standards.

Our Assessment: Colt’s 1911 served the United States military through two World Wars and several other conflicts, is still in use by some units today, and has become popular with law enforcement, competitors, and recreational shooters across the nation. The design has seen some updates including a firing-pin block safety, higher profile sights, and more ergonomic grips, but the basic design and fantastic trigger remain the same after more than a century. Due to its popularity and long life, the 1911 has also been a popular choice for custom pistols, with a wide variety of sights, barrels, parts, and popular modifications. This example is a Commercial Government Model made during a period when some of their finest work was produced. This is a Colt MK IV Series ’70 Government Model from 1979. The descendent of the original Model of 1911, it has updates of the 1911-A1 as well as a collet-style bushing to improve accuracy. This one looks great and has some light wear, but still has a great bore and strong mechanics. It’s been equipped with a set of pewter grips from Sid Bell with American eagles, giving the pistol a distinctive appearance. Whether you’re looking to add to a Colt collection, want to have a great base for your custom build, or can just appreciate a steel-frame, .45 pistol from the heyday of the 1911, this is a great addition to any safe in America. Please see our photos and good luck!