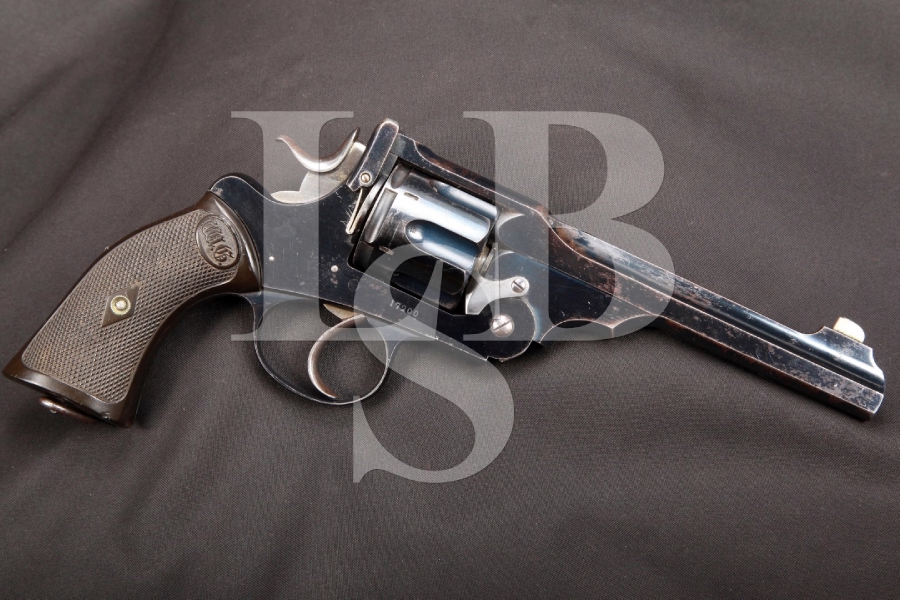 LSB#: 141029MD26
Make: Webley & Scott
Model: Webley Government Army Model of 1896
Serial Number: 17200 (From “Webley Revolvers” by Bruce & Reinhart, observed serial numbers were 10,300 to 22,126)
Year of Manufacture: circa 1902 (This model was manufactured from 1896 to 1912.)
Caliber: .455 Webley
Action Type: Single and Double Action Top-Break Revolver with Left Side Thumb Release
Markings: The top of the barrel rib is marked “ARMY AND NAVY CSL” (Army and Navy Co-operative Society Ltd. formed in 1871 to sell guns and equipment to its members.) The left side of the top strap is marked “”WG” ARMY MODEL”. The left side of the frame is marked “WEBLEY / PATENTS” and with a W&S “Winged Bullet” logo. The left flat on the barrel lug is marked “455/476”. The right side of the frame is marked “17200”. The underside of the barrel lug at the frame is marked “200”. The rear face of the cylinder is marked “200” in two locations and “.476”, and the flutes of the cylinder are each marked with a “Crown / Crossed Flags / V”. The left side of the grip frame is marked “17200” and “K”2047”. The insides of the grip panels are each marked “18841”.
Barrel Length: The 6” barrel is round on the bottom with flat sides and a full length top rib.
Sights / Optics: The front sight is a German silver rounded blade fixed to a raised base on the barrel. The rear sight is a “U” notch at the bottom of a “V” in the top of the barrel latch.
Stock Configuration & Condition: The grips are black checkered hard rubber on a square butt grip frame. Both grips have a scripted “W.G.” in an oval at their top. There is a small crack on the bottom surface of the left grip. The grips show small compression marks on their top and bottom edges. The checkering shows light to moderate uneven wear with mars in both grips. The grips are in about Good overall condition.
Type of Finish: The finish is a bright blue with the hammer, trigger, cylinder cam and cylinder cam lever in-the-white.
Finish Originality: The finish is apparently original though the WG Army stamp is light. We see mint proofs and the nearly impossible to imitate deep and dark Webley blue.
Bore Condition: The bore is bright and the rifling has seven wide grooves with narrow lands. The lands show light wear on their inner edges but flair into the grooves with no hint of a sharp angle. As near as we can measure, the groove-groove diameter is 0.455”. Metford rifling is supposed to have grooves of 0.150” and lands of 0.0506”, with a groove depth of only 0.005”, and if this isn’t Metford rifling, is it pretty close to it. There is very light erosion near the muzzle.
Overall Condition: This handgun retains about 70% of its metal finish. There is thinning on the barrel and the edges of the frame and its appendages. There are handling marks, scratches and small spots of erosion scattered around the surfaces. There is also a patch of pinprick surface erosion on the left side of the frame below the cylinder with pitting in the cylinder cam lever screw. The barrel latch checkering shows moderate wear and the hammer checkering shows light wear. The grip screw and the right cylinder cam screw are disfigured. Many of the markings are only partially visible, which we understand is from poor stamping. Overall, this handgun rates in about Fine condition.
Mechanics: The action functions correctly. The barrel and cylinder lockups are SOLID. The single action trigger pull is crisp. The extractor has a single pin to guide it into position as well as its shaft.
Box, Paperwork & Accessories: There is a lanyard ring on the bottom of the grip frame.
Our Assessment: From “Webley Revolvers” by Bruce & Reinhart: “The Webley W.G. models started with the Model 1886 and ended with the Model 1896. The revolver’s “W.G.” marking was meant to represent “Webley Government” model. This model was sold to both civilians and to officers of the British Army (who had to supply their own personal weapons), and there was also a target version available with target sights. Unlike the matte finish of the Service revolvers, the W.G. models had a polished blued finish. The W.G. revolvers achieved almost immediate success in shooting matches. At the 1889 NRA Wimbledon Camp matches, celebrated American shooter Chevalier Ira Paine found his revolvers were not eligible, picked-up a Model 1889 he had never shot before, and obtained three “Highest Possible” scores with it.” This revolver has a 6” barrel marked with the distributors name in large lettering. The frame, cylinder and barrel have matching numbers, although the grips are from a different revolver in the same series. The revolver has about 70% of its finish remaining. There is thinning on the barrel and the edges of the receiver, with handling marks and spots of erosion scattered over the finish. The grips are checkered hard rubber on a square butt grip frame that show handling marks and a small crack at the bottom of the left grip. The bore is bright but with light erosion, and we believe the rifling to be Metford. This is a very well made revolver and we can see how the target version could have won so many matches. With its solid action it might just last another 100 years but whoever buys it better care for it as well as it has been to this point.