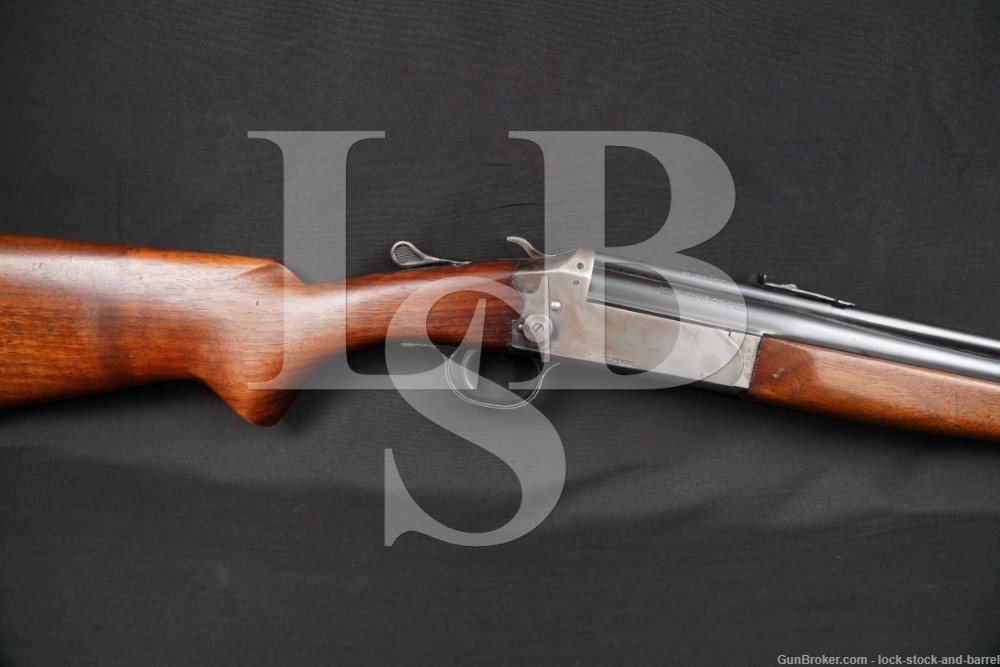 Year of Manufacture: 1938-1950. Given the Patent Pending marking, it is likely earlier production.

Sights/Optics: The front sight is a small blade integral to a ramped base that is screwed to the barrel. The rear sight is a u-notch elevator sight dovetailed to the rear of the barrel.

Stock Configuration and Condition: The stocks are two-piece smooth wood with semi-pistol grip, straight comb and serrated black hard rubber buttplate. The stocks have some scattered light nicks, dings, and scratches. There are cracks in the right of the wrist at the front edge and in the left-rear of the forend. There are a few tiny losses around the front edges of the wrist. The LOP measures 14 1/8″ from the front of the trigger to the back of the buttplate. The plate has light wear and a couple of small losses at the edge near the toe. Overall, the stocks are in Good-plus condition.

Bore Condition: Both bores are bright and the rifling in the .22 LR bore is sharp. There is no erosion in either bore.

Overall Condition: This combo gun retains about 80% of its metal finish. The barrels have generally strong finish with some scattered minor marks and infrequent faint surface oxidation. Most of the exposed surfaces of the receiver have worn to white with color at the rear edges and on the interior. The worn areas show some discoloration from oxidation. The screw heads range from sharp to tool marked with strong slots. The markings are clear. Overall, this combination gun is in Very Good condition.

Mechanics: The action functions correctly. The barrel selector is on the right side of the receiver. The barrel assembly locks up tight with no play to the frame. We have not fired this rifle/shotgun combo. As with all used firearms, thorough cleaning may be necessary to meet your standards.

Our Assessment: The Model 22-410 was introduced in 1938 as a survival gun. The .22 Long Rifle barrel was good for small game/varmint hunting, while the .410 was good for, say, a turkey (gobble gobble). Not a bad tool to put dinner on the table with! It was produced until 1950 when Savage, the owner of Stevens, re-branded the gun as the Model 24. This example appears to be from early production, still marked “PATENT PENDING”. The gun retains strong mechanics and great bores, so it could still serve its original purpose. That said, these 22-410 models are gaining collector interest, and this would be a nice addition to a Savage/Stevens collection. Good luck and happy bidding!