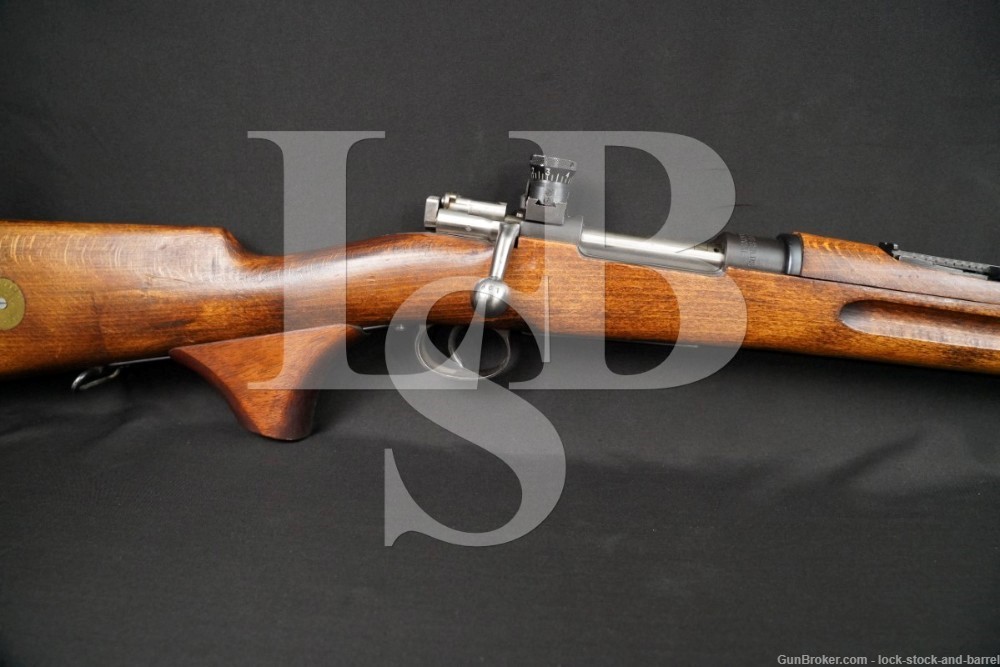 Markings: The import mark on the barrel reads “M96 SWEDEN 6.5X55 / CAI ST ALB VT”. The top of the receiver is marked “crown / C / CARL GUSTAFS STADS / GEVARSFAKTORI. / 1920”. The left side of the receiver is marked with the serial number. The bolt assembly is marked with the last three digits of the serial number in 4 separate areas. Most of the metal parts are marked with the last 3 digits of the serial number and/or with small “crowns”. The marking disk on the right side of the buttstock is marked over the “1” in the small section. It is unmarked in the medium section. It is marked over “0” in the large section. The rear sight is marked “ELITE / 101”.  There are a few other small stampings on the rifle.
For more info on reading the marking disk see gotavapen.se/gota/artiklar/rifles_se/faq_se_rifles.htm .

Sights / Optics: The front replacement sight is a globe sight with an aperture insert. The original rear sight is still in place. It is a flip up assembly made up of two separate notches. When down a “U” notch is used along a sliding escalator marked “3 4 5 6”. When up a “V” notched blade is used on the sliding ladder marked from “7-20”. The rear target sight is a fully adjustable aperture. It uses oversized adjustment knobs marked from “1-6” and from “0 – 9”.

Stock Configuration & Condition: The two piece hardwood stock has a straight grip, finger grooves, metal nose cap, hole for the included cleaning rod, barrel band with sling loop, sling loop under the butt stock, marking disk on the butt, and a metal butt plate. A removable Ingemarrson model pistol grip has been added. The buttplate shows some small scratches and cleaned surface erosion. The wood shows scrapes, scratches and compression marks. The LOP measures 14 inches from the front of the trigger to the back of the buttplate. The stock rates in about Very Good Plus overall condition.

Bore Condition: The muzzle and grooves are semi bright. The rifling is deep. There is fouling at the muzzle and in the grooves. The fouling should clean up some. There is no visible erosion

Overall Condition: This rifle retains about 94% of its metal finish. The metal shows scattered scrapes & scratches as well as few areas of light discoloration. The bottom metal shows a spot of light thinning. The screw heads show light use. The markings are deep. Overall, this rifle rates in about Very Good Plus to Fine condition.

Our Assessment: This Swedish Mauser started life back in 1920 as a Model 1896. It has since been upgraded and is now a Swedish FSR M96 Target Rifle (FSR = Volunteer Shooters Organization). It is fitted with a Ingemarsson detachable pistol grip to provide for more accurate handling on the range. These rifles were used for competition shooting by a Swedish organization not unlike the Civilian Marksmanship program (CMP) here in the states. These rifles were used in the 1950’s through the 1970’s and were on loan from the Swedish Army.
A small number of FSR M96 Target Rifles were imported into the U.S. for sale during the 1980’s. They are highly regarded Target Rifles. This FSR M96 Target Rifle is in nice shape. It has lots of Swedish markings including matching part numbers and small Swedish crowns on most of the metal parts. The markings on the receiver are deep & crisp and the bore is strong & bright. This will make a great addition to a Swedish Mauser collection.
For FSR M96 info see http://dutchman.rebooty.com/fsr.html.
Good luck.