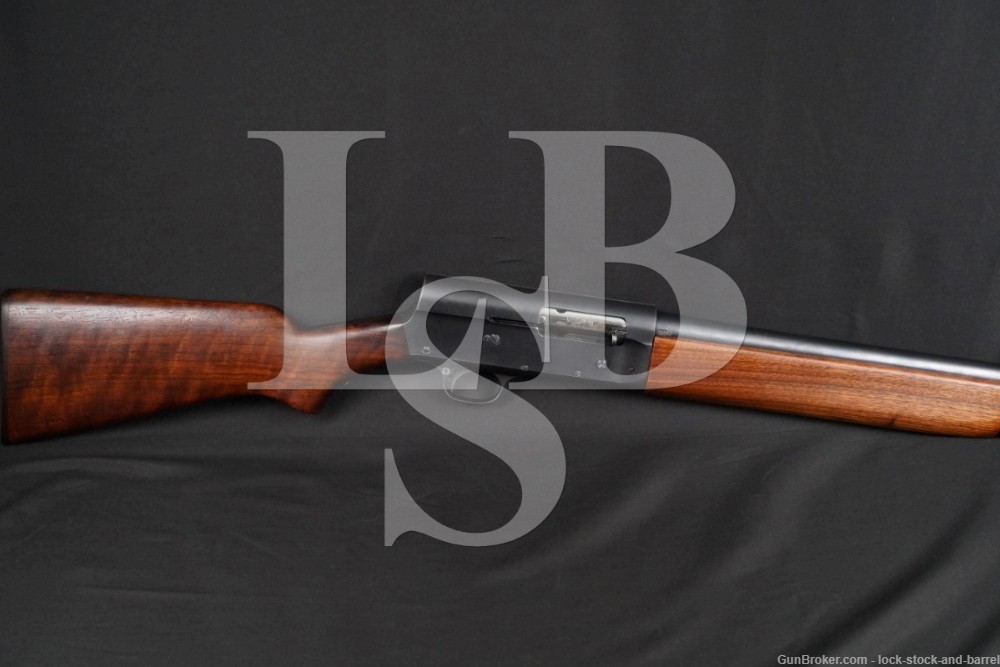 Sights / Optics: The front sight is a brass bead fixed to the front of the barrel. The top of the receiver has a shallow, serrated groove as a sighting plane.

Stock Configuration & Condition: The stocks are smooth two-piece walnut with a pistol grip, straight comb, and serrated Remington buttplate. The forend has been refinished, it has no major defects, just light handling marks. The buttstock has some scattered compressions, dings, and draglines. There are some little chips on the edges of the pistol grip. There are areas of discoloration from oil. There are no cracks. The LOP measures 14″ from the front of the trigger to the back of the buttplate. The plate has scattered light wear, mostly at the heel. Overall, the stocks are in about Fine condition.

Finish Originality: Original. The barrel is not original to the receiver based on the serial numbers.

Overall Condition: This shotgun retains about 85% of its metal finish. The front sight is a replacement. The muzzle is a little rough and it is possible the Sheriffs Office modified it. There are some scattered little nicks, scuffs, and scratches. There are some areas of light surface frost scattered over the metal. There is finish loss and thinning on the edges. There are some scattered light handling marks. There are scattered scuffs that have thinned the finish. There is standard operational wear. The bolt appears to have been lightly polished. There is light wear. The screwheads show tool marks and a portion of the bottom tang locking screw has snapped off. The markings are clear. Overall, this shotgun is in about Very Good condition.

Our Assessment: The Remington model 11 shotgun shares the same basic action as the Remington Sportsman, The Browning A5 and the Savage 720. Like all of those shotguns, it has also seen some military use. The Sportsman was used in field configurations for recreational shooting and for aerial gunnery training, while riot configurations like this one would typically be used by guards at bases or industrial locations vital to the war effort. This example is in Very Good condition retaining about 85% of its metal finish, a great bore, and strong mechanics. This one has markings from the Modoc County Sheriff’s Office, it has had a new front sight installed and the muzzle may have been modified by them. No matter the case, this is a badass Sheriffs riot gun that was also around for WWII. Military shotguns themselves are scarce when compared with rifles and handguns, but this is a rare opportunity to own one of the few semi-automatic shotguns from the U.S. war effort during WWII. Please see our photos and good luck!