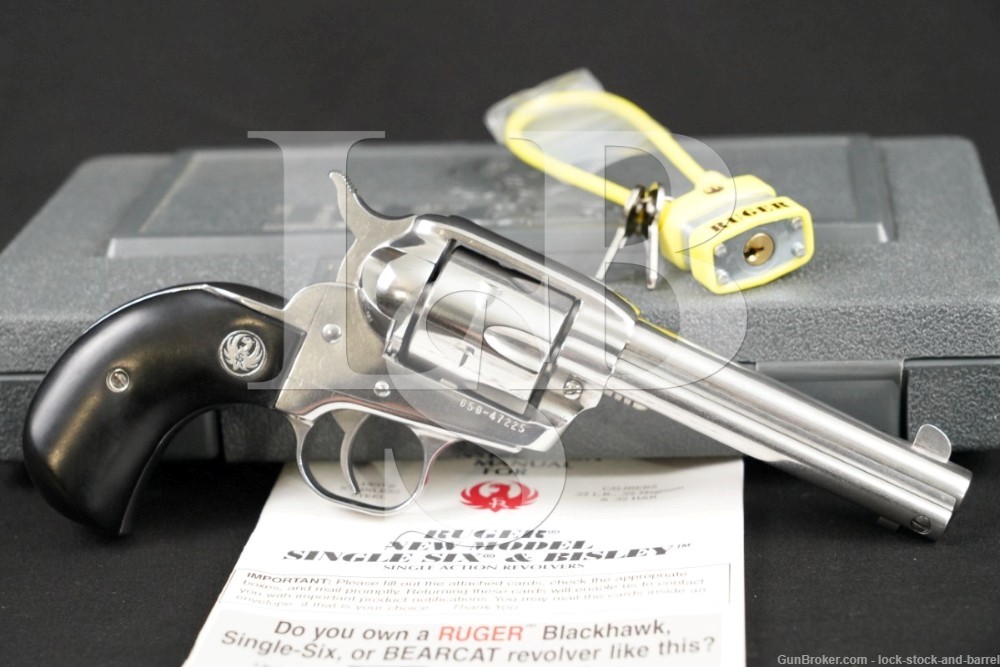 Model: New Model Single-Six Revolver (Model No. 06513, Catalog No. KSSMBH-4F). This model was also referred to as the “Vaquerito” by Ruger in some advertisements, and as the “Baby Vaquero” by collectors.

Sights/Optics: The front sight is a blade fixed to the front of the barrel. The rear sight is a square notch at the rear of a channel in the top strap.

Stock Configuration and Condition: The grips are two-piece smooth black laminate panels set on a bird’s head grip frame; both have inset Ruger medallions at the top. Apart from minor handling marks, the grips are free of any notable wear or damage. There are no chips or cracks. Overall, the grips rate in Fine-to-Excellent condition.

Bore Condition: The bore is bright, and the rifling is sharp. There is no erosion.

Overall Condition: This handgun retains about 98% of its metal finish. The cylinder has a faint turn line, barely through the finish. The barrel has very minor holster wear on the left side at the muzzle. Screws are sharp, and all markings are clear. Overall, this revolver is in Fine-to-Excellent condition.

Mechanics: The action functions correctly. The cylinder locks up with only minor play on each chamber. There is a transfer bar. We did not fire this revolver. As with all used firearms, thorough and consistent cleaning may be necessary to meet your maintenance standards.

Box, Paperwork, and Accessories: This Single-Six includes a serial-matching gray plastic Ruger factory snap case, a lock, and its manual.

Our Assessment: From an NRA.com article looking back at the Single-Six: “Only a relative handful of rank, old cowboy types still clung to the thumb-buster, and most of them couldn’t scrape together enough cash to buy a new gun. Besides, the tooling to build single-action revolvers was worn out and obsolete. It made absolutely no business sense whatsoever to continue to make single-action revolvers.” In most Ruger stories, this is right about when Bill Ruger says, “Hold my white russian,” and then makes it all make perfect sense. Mix Bill’s charmed timing with the rise in popularity of westerns on the then-new television with a fair bit of profit made selling the venerable Standard Pistol, and you have the Single-Six revolver, which has been in production continuously since 1953. This example is from 2005, and is in overall Fine-to-Excellent condition. Chambered for the uncommon .32 H&R Magnum, this variant of the New Model Single-Six is on the rarer side, and is more commonly known as a “Baby Vaquero” or “Vaquerito”. By appearances, it is a Vaquero, but with the smaller frame and cylinder of a New Model Single-Six that accommodates the .32 H&R Magnum cartridge, which was developed in 1984 as a joint venture between the namesake company and Federal ammunition. Few of these were made, and they became very popular in Cowboy Action Shooting competitions, both for those with smaller hands as well as for categories which require the shooter to shoot their handguns single-handed. As Ruger firearms march steadily into collectability, it’s not a bad idea to key in on which examples will continue to rise in value—and a bird’s head version certainly qualifies. We believe this is going to be one of them. Good luck and happy bidding!