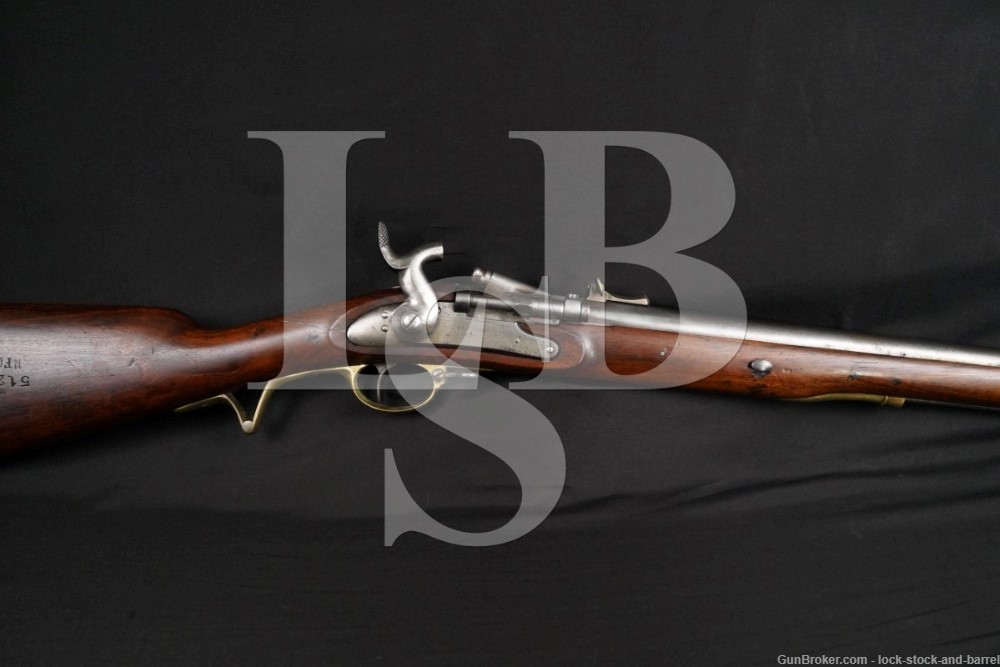 Markings: The lock-plate is marked “PIRLOT FRERES / A / LIEGE”. The breech-block assembly is marked “M” and “211” in several areas, plus it has a Crown at the top. The left side of the barrel has a struck out “211”, is marked with a crown over “CR” (the royal cypher of King Christian IX) adjacent to “606” and has a oval marked “E / LG / *”.  The side-plate is marked “211”. The cleaning rod is marked “211”. The bottom of the brass cap at the front of the cleaning rod’s slot in the forend is marked with a crowned “D”.  The right side of the butt is marked “5122 / NFC”. There is a faded cartouche just behind the bottom tang.

Stock Configuration & Condition/ Grip: The stock is one-piece refinished wood featuring a brass nose cap, a brass ferrule, a brass capped slot in the forend for the included cleaning rod, two wedges on the forend, a lock-plate, a brass side–plate, a straight wrist with finger grooves integral to the bottom tang, a straight comb with cheek-piece and a brass butt-plate. The forend gas a sling swivel fixed just behind the nose cap and a sling swivel fixed at the front of the trigger guard. There are several pins on the stock: two just behind the front sling swivel on the forend, two ahead of the rear forend wedge, one behind the rear forend wedge and one behind the side-plate. The stocks have some light handling marks, nicks and scuffs. Notably, there is moderate wear on the left side of the forend around the wedge slots, a light crack between the two wedges, a light crack which originates at the rear end of the side-plate, a crack which originates at the left side of the trigger and extends around the wrist to the rear end of the lock-plate which has been patch repaired with wood filler. Also, the top of the wrist has several small dings and patch repairs with wood filler, there is a light crack on the right top portion of the wrist that extends to the lock-plate, there’s a ding at the tip of the butt-plate’s top tang, there is a crack that extends from the right side of the trigger to the bottom of the lock plate and there’s a ding at the bottom of the rear wedge on the right side of the forend. The LOP is 13.75” from the trigger to the rear end of the butt-plate. The butt-plate is tarnished and has some light-moderate handling marks. Overall, the stock is in Very Good condition for a refinished Antique.

Bore Condition: The bore is grey with mostly sharp rifling. There is erosion in the bore including patches of pitting.

Overall Condition: The rifle has no metal finish. The brass parts are tarnished with scattered light-moderate handling marks and light spots of surface oxidation. The bright metal parts are coated in scattered light patches of surface oxidation. There are some light scattered handling marks, nicks and scuffs. Notably, there are some scattered patches of light pitting concentrated on the sides of the barrel. The markings remain clear. The screwheads are unmarred and serviceable. Overall, the rifle is in Very Good condition for an Antique.

Box Paperwork and Accessories: There is a cleaning rod included with the rifle. Also, there is a bayonet lug fixed by the muzzle.

Our Assessment: This is a Pirlot Freres manufactured Danish Navy Model 1853/66 Rifle manufactured sometime between 1836-1878. This gun was originally manufactured as a muzzleloader before being converted to a breechloader with a Snider style action. The Snider style action was invented by Jacob Snider, an American wine merchant, who submitted his design to the British War Department which was seeking a new breech-loaded rifle in the mid-1860s. Following several years of trials the Snider Rifle was accepted for service with the British military and the action was eventually adopted by a number of other powers. As for the specific genesis of this rifle, Denmark was in a dire geopolitical position in the late 1860s, it had been at war twice with Prussia and suffered a major defeat in 1864. The Danish were desperate to achieve military parity with their increasingly powerful and belligerent neighbor. The country ended up pursuing a modern weapon system at the end of the 1860s, the Remington Rolling Block rifle, and it began to convert its aged arsenal of muzzle-loaders to breech-loaded rifles with Snider-style actions.

The Danish Navy Model 1853/66 was developed during this period of modernization. When the Germanic population of Schleswig, Holstein and Lauenburg rebelled against Danish rule in 1848, with support from Prussia,  a brutal war ensued which resulted in a pyrrhic victory for the Danish who managed to retain the contested territory until 1864 when Prussia seized it in an ensuing conflict. In the aftermath of the rebellion in 1848, a large number of arms were captured from the defeated German nationalists (including about 5,000 rifles that were made in Liege) and eventually adapted for use by the Danish navy. These rifles would later be converted to breechloaders with Snider style actions when Denmark began its modernization effort. These converted rifles were chambered for one of the largest rimfire cartridges ever manufactured, 17.5mm Danish.

This particular specimen is nicely preserved and remains mechanically sound. It retains its distinct Danish military markings and the Belgian manufacturer’s stamp is still present on the lock-plate. This is a great option for historical firearms collectors; it is both chambered for one of the largest rimfire cartridges ever developed and is one of the least common weapon systems to have used a Snider style action. Good luck on your bid!