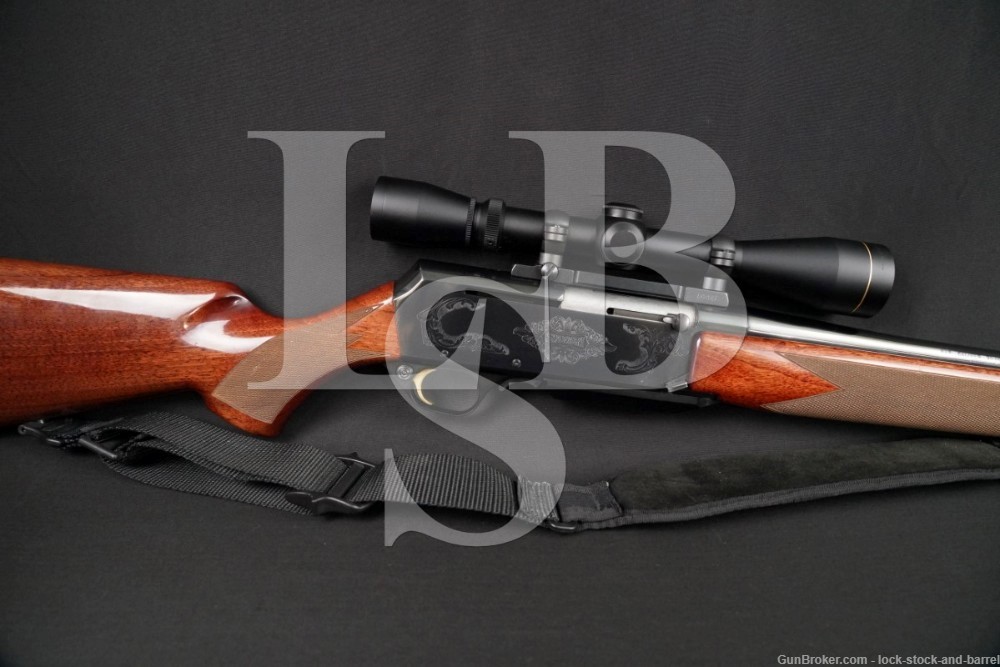 Markings: The left side of the barrel is marked “BROWNING ARMS COMPANY MORGAN, UTAH & MONTREAL P.Q. / MADE IN BELGIUM-ASSEMBLED IN PORTUGAL” and at the receiver with a Belgian proof mark, a date code, and an inspection mark. The right side of the barrel is marked “BAR CALIBER .30-06 Sprg ONLY / BROWNING S.A.”. The sides of the receiver are marked “SAFARI” with floral scrolls, the left side is also marked with the serial number. The trigger guard has a gold buck mark logo. The buttpad is marked “BROWNING” with a Buck Mark logo.

Sights / Optics: The front sight is a hooded beaded blade dovetailed atop a serrated ramped riser that is screwed to the barrel. The rear sight has been removed leaving two drilled, tapped, and filled holes. Equipped to the top of the barrel via a Leupold rail and two rings is a Leupold Vari-X IIc with 3-9x magnification and a duplex reticle. The scope shows faint external wear and the lenses retain a high level of visibility. The scope rates in about Fine-Plus condition.

Stock Configuration & Condition: The stocks are two-piece checkered walnut with pistol grip, straight comb, black rubber weave texture Browning buttpad, and sling swivels front and rear with an attached black canvas padded sling. The wood shows infrequently dispersed tiny nicks and faint lines. There is a slightly more notable scratch on the left side of the buttstock and a notable compression on the left side of the forearm behind the checkering. The checkering shows few individually nick checkers and is generally sharp. The LOP measures 13 7/8″ from the front of the trigger to the end of the buttpad, which shows light wear. Overall, the stocks are in about Fine-Plus condition.

Bore Condition: The bore is bright with sharp rifling. There are a few scattered faint spots of erosion.

Overall Condition: This rifle retains about 98% of its metal finish. There are some faint marks on the sides of the receiver. There is light thinning around the muzzle. The screw heads are sharp and the pins are clean. The markings are crisp. Overall, this rifle is in about Fine-Excellent condition.

Our Assessment: As stated on Browning’s website, “The Browning BAR sporting version is certainly a distinct and separate rifle from the military BAR M1918, but its design is the result of Browning’s unmatched understanding and expertise with automatic rifles that started with John M. Browning. His grandson, Bruce Browning, was the driving force behind today’s BAR. A large team of automatic firearms experts at the FN factory in Belgium also played a key role in its development. This group of FN automatic rifle designers, lead by Marcel Olinger, began serious work on the project code named “Carbine 66,” with full-scale development and testing done throughout 1966 in preparation for an official 1967 product launch. Both the history and the efficiency of this amazing rifle is unequaled among autoloading rifles.” This semi-automatic rifle is chambered for .30-06, one of the most popular hunting rounds available. It isn’t apparent that this rifle has seen much, if any, use in the field. It also comes equipped with a clean Leupold scope. Please see our photos and good luck!