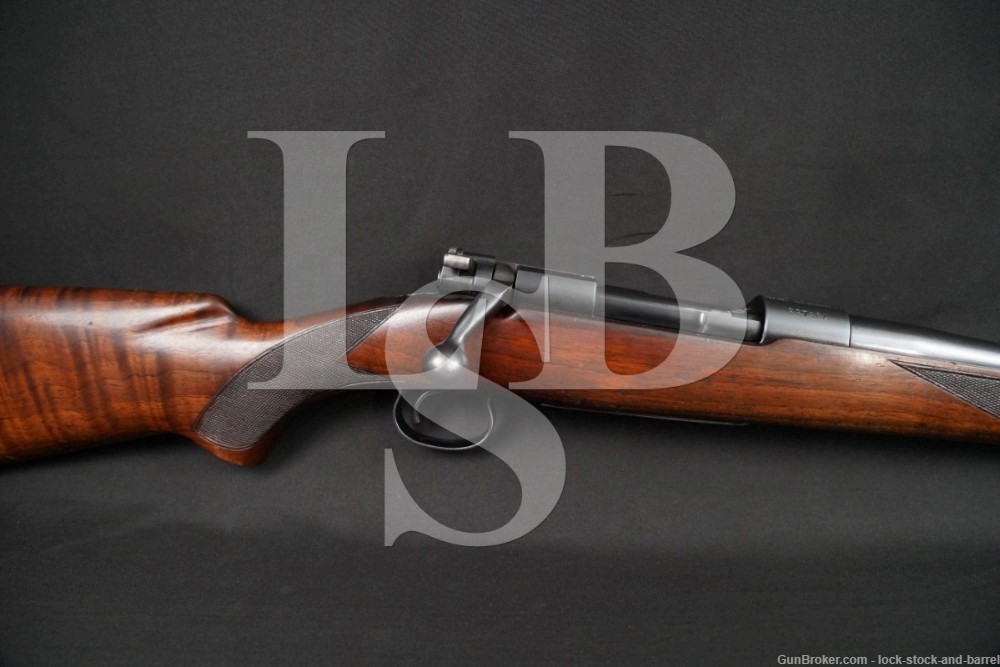 Sights/Optics: The front sight is a beaded brass blade pinned in a slotted ramped base fixed to the front of the barrel. There is a boss at the rear of the barrel with a dovetailed “U” notch two-position flip-up sight. The chamber ring and the left-rear of the receiver both have a pair of drilled, tapped, and filled holes.

Stock Configuration and Condition: The stock is a one-piece checkered walnut with a pistol grip, fluted straight comb, serrated steel shotgun-style buttplate, and sling swivel studs front and rear. There are some scattered scuffs, compressions, draglines, and areas of finish wear. There are some scattered scratches that have darkened with age. There are some dings and minor scrapes which have darkened with age. The LOP measures 14” from the front of the trigger to the back of the plate. The plate has scabbing, finish loss, erosion, and little scratches. Overall, the stock is in Very Good condition.

Mechanics: The action functions correctly. The rifle has a three-position safety similar to the M1903: all the way to the left locks the bolt and disables the trigger; straight up disables the trigger but the bolt is free to move; to the right enables the rifle to be fired.  We did not fire this rifle. As with all used firearms, a thorough cleaning may be necessary to meet your maintenance requirements.

Our Assessment: Winchester’s Model 54 rifle was made from 1925-1936, with a carbine offered in 1927 and an improved version offered in 1930 which had a chrome-moly barrel instead of the earlier nickel-steel. The rifle was Winchester’s only bolt action centerfire rifle at the time, and ceased production when the legendary Model 70 became available in 1937. This example was made in 1929, with a 24” barrel chambered in the classic .30-06 cartridge. This is one of, if not the most popular deer hunting cartridges in America, and is usually readily available in a variety of loads. This rifle shows standard wear considering its age and likely use in the field but has a minty bore ready to do work for years to come. Please see our photos and good luck!