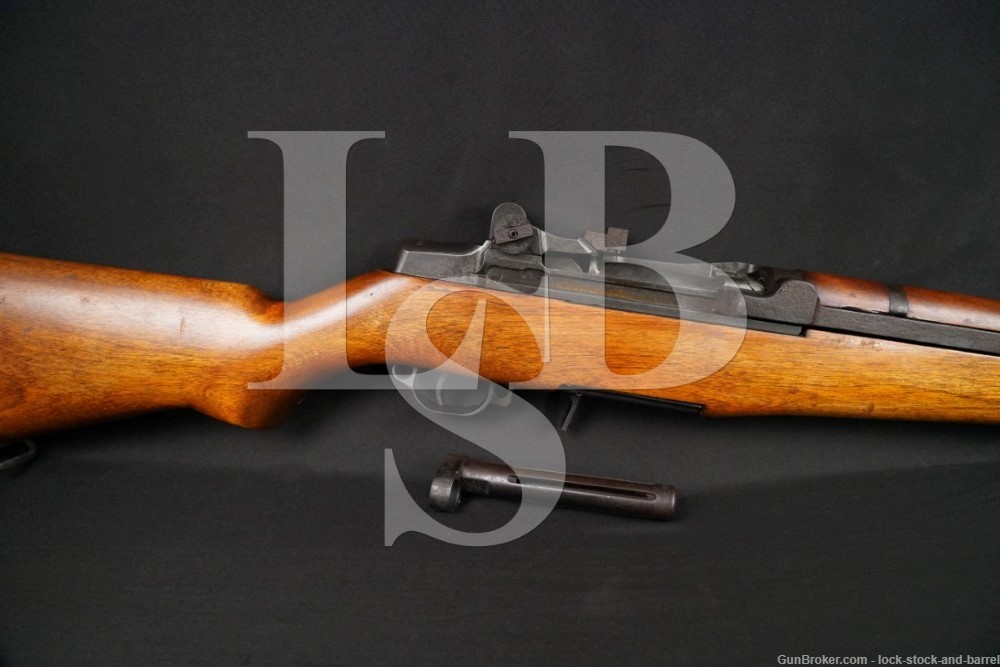 Sights / Optics: The front sight is a blade set between two protective wings. The rear sight is a fully adjustable aperture sight. The windage knob is marked “LEFT arrow” twice. The elevation knob is marked from “2-12” in increments of two and “UP arrow DOWN arrow / BATTLE triangle RANGE”.

Stock Configuration & Condition: The hardwood stock has a pistol grip, metal nosecaps, two sling loops and a metal buttplate with hinged metal door for storage in the butt. The buttplate shows surface erosion. The wood shows various scrapes, scratches and light soiling. The LOP measures 13 1/8 inches from the front of the trigger to the back of the buttplate. The stock rates in about Very Good Plus overall condition.

Bore Condition: The 2 grooved bore is bright; semi bright at the muzzle. The rifling is sharp. There is fouling in the grooves near the muzzle. There is no erosion. The bore shows an M.E. of 0.2.

Mechanics: The gas cylinder lock is not installed. The rifle comes with a flash suppressor that is integral to the gas cylinder lock. The gas tube appears secure. The stripper clip guide is loose.
The action functions correctly. We did not fire this rifle. As with all used firearms, a thorough cleaning may be necessary to meet your maintenance requirements.

Box, Paperwork & Accessories: There is NO magazine. The rifle comes with a flash suppressor that is integral to the gas cylinder lock. It shows surface erosion and is in Good condition.
It is NOT LEGAL to install the flash suppressor in California. It is your responsibility to know your local laws as to its installation of a flash suppressor on a magazine fed semi automatic rifle.

Our Assessment: This Golden State Arms M-59 Trooper was made sometime between 1964 and 1966. It is a civilian variation of the Beretta BM59. Golden State Arms originally marketed an M-59 which was licensed by Beretta. The M-59 Trooper is basically the same rifle but the design is no longer licensed by Beretta. This M-59 Trooper has cosmetic issues and does Not come with a magazine. It should clean up some and magazines can be found on-line or at a gun show. Good luck.