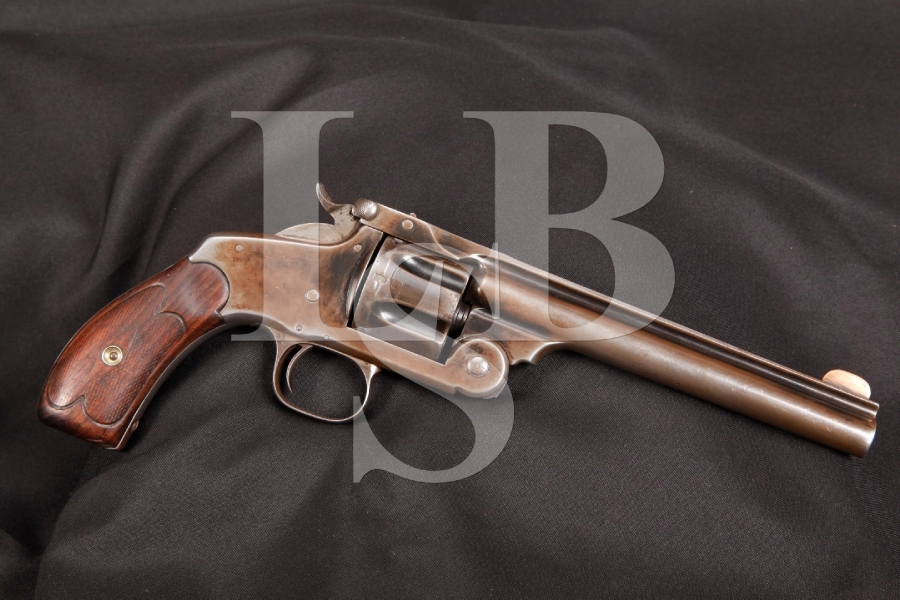 Make: Smith & Wesson
Model: New Model Number Three
Serial Number: 15984
Year of Manufacture: All Frames for this Model were Manufactured prior to 1898, Making this Revolver an Antique
Caliber: .44 S&W Russian
Action Type: Top-Break Single Action Revolver
Markings: The rib atop the barrel is marked “SMITH & WESSON SPRINGFIELD. MASS. U.S.A. PAT’D JAN. 17 & 24. 65. JULY 11. 65 / AUG. 24. 69. APR. 20. 75. FEB. 20 & DEC. 18. 1877. REISSUE JULY 25. 1871”. The barrel extension, barrel latch, rear face of the cylinder and the grip frame’s butt are all marked “15984”.
Barrel Length: 6 ½”
Sights / Optics: The front sight is a pinned half round replacement blade made of brass. The rear sight is a tiny “U” notch in the barrel latch.
Stock Configuration & Condition: The grips are checkered walnut with a smooth diamond at the escutcheon. The left grip panel has no chips, cracks or scratches, but the checkering is worn almost flat in places. The smooth round area at the top has the initials “WDN” nicely carved into the wood. The right grip panel has three compression marks towards the bottom, two of which are quite deep. The checkering is worn more on this panel than the other, but does not have any carving at the top. It does have “15984” pressed into the wood on the inside of the grip panel. Both grips show wear, handling and compression marks. The grips rate in about Very Good overall condition as antique.
Type of Finish: Blue
Finish Originality: Original
Bore Condition: The bore is gray and the rifling is surprisingly sharp. There is some erosion throughout the bore, but none of the deep pitting often seen in black powder arms from this period.
Overall Condition: This handgun retains about 5% of its metal finish. There are remnants of bluing that show in the recess below the barrel rib, areas of the frame on each side of the cylinder window and on the cylinder. The cylinder flutes show the darkest retained finish, while the cylinder shows a smooth to the touch drag line through the finish. The surface of the frame is quite smooth, without the pinprick erosion typically found on blued guns. It’s more like the revolvers that have been protected by nickel plating. Most of this handgun has a brownish patina. The checkering on the barrel latch remains, but has smoothed over time while the hammer checkering has thinned at the very rear. The screw heads all show marks of use, particularly the barrel latch screw, but remain pretty sharp. The markings are clear, with the barrel extension and latch being the lightest. Overall, this handgun rates in about Very Good condition for an antique.
Mechanics: The action functions, but not entirely correctly. There is very little play in the barrel latch and almost none at the barrel hinge. The cylinder advances when the hammer is placed at full cock; the hammer releases when the trigger is pulled. According to “Smith & Wesson Hand Guns” by McHenry and Roper: “Full and half cock notches provided also rebound notch designed to catch and hold hammer against accidental discharge.” This revolver does not engage at half cock and the hammer does not rest in the rebound position after the trigger is engaged with the hammer at full cock. As a result, the hammer must be manually restrained in order to operate the barrel latch. We did not fire this handgun.
Box, Paperwork & Accessories: None
Our Assessment: The New Model Number Three was the finest single action revolver Smith & Wesson produced in the 19th Century, having all the refinements learned since their very first single action revolver. It was a noted target match revolver in its adjustable sighted version, used by Annie Oakley, Ira Paine and Walter Winans. In the fixed sighted version, as is this example, it is known that Virgil Earp, Montana Jack and Buffalo Bill Cody all owned New Model Number Three revolvers. This revolver will show nicely as it is, and could likely be restored to full working order by a competent gunsmith. It should hold an honored position in any collection of S&W or Old West revolvers.