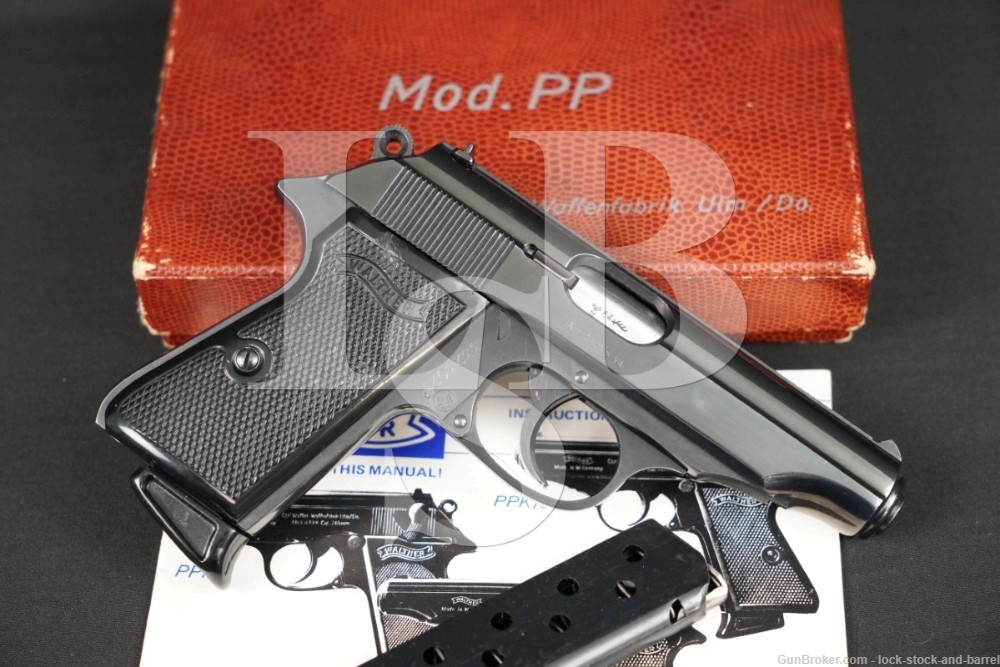 Stock Configuration & Condition: The grips are two-piece checkered black plastic with a Walther banner logo at the top of each panel. The panels show little nicks and scratches on the smooth borders. There is also a notable scuff at the top of the right panel. The checkering shows handling wear and has a few scattered compressed checkers but it is generally sharp. There are no chips or cracks. Overall, the grips are in about Good-Very Good condition.

Bore Condition: The bore is mostly bright and the rifling is sharp. There is no erosion in the bore.

Overall Condition: This handgun retains about 97% of its metal finish. There are some faint scratches throughout. There is light thinning on certain leading edges. There is some extremely faint oxidation on the back strap. The screw head is sharp. The markings are clear. Overall, this pistol is in about Fine-Plus condition.

Mechanics: The action functions correctly. The double-action trigger pull is a little stiff and the single-action pull has a smooth takeup followed by a light, crisp break. This pistol has a decocking safety that functions correctly. We did not fire this handgun. As with all used firearms, a thorough cleaning may be necessary to meet your maintenance requirements.

Box, Paperwork & Accessories: This pistol comes in its original box with two 8-round magazines. One of the magazines has a pinky extension.

Our Assessment: The Walther PP series pistols are blowback-operated semi-automatic pistols, developed by the German arms manufacturer Carl Walther GmbH Sportwaffen. It features an exposed hammer, a traditional double-action trigger mechanism, a single-column magazine, and a fixed barrel that also acts as the guide rod for the recoil spring. The series includes the Walther PP, PPK, PPK/S, and PPK/E models. The PP and the PPK were among the world’s first successful double-action semi-automatic pistols. They are still manufactured by Walther and have been widely copied. The design inspired other pistols, among them the Soviet Makarov, the Hungarian FEG PA-63, the Polish P-64, the American Accu-Tek AT-380 II, and the Argentinian Bersa Thunder 380. The PP and PPK were both popular with European police and civilians for being reliable and concealable. This is a blued Walther PP in .32 ACP caliber made by Walther in Germany. This pistol is in about Fine-Plus condition with about 97% of its original finish remaining. The bore is bright with sharp rifling and no erosion. This pistol has a marking stamp over it with a ‘starburst’. We suspected this may be a police issued pistol but there are no other markings that indicate that. The pistol comes with two magazines and an original box. If you want a small pistol for concealed carry or if you have small hands that won’t fit around a grip with a double-stack magazine, this is a quality pistol that is great for concealed carry. It would make a nice addition for a Walther collector. Please see our photos and good luck!