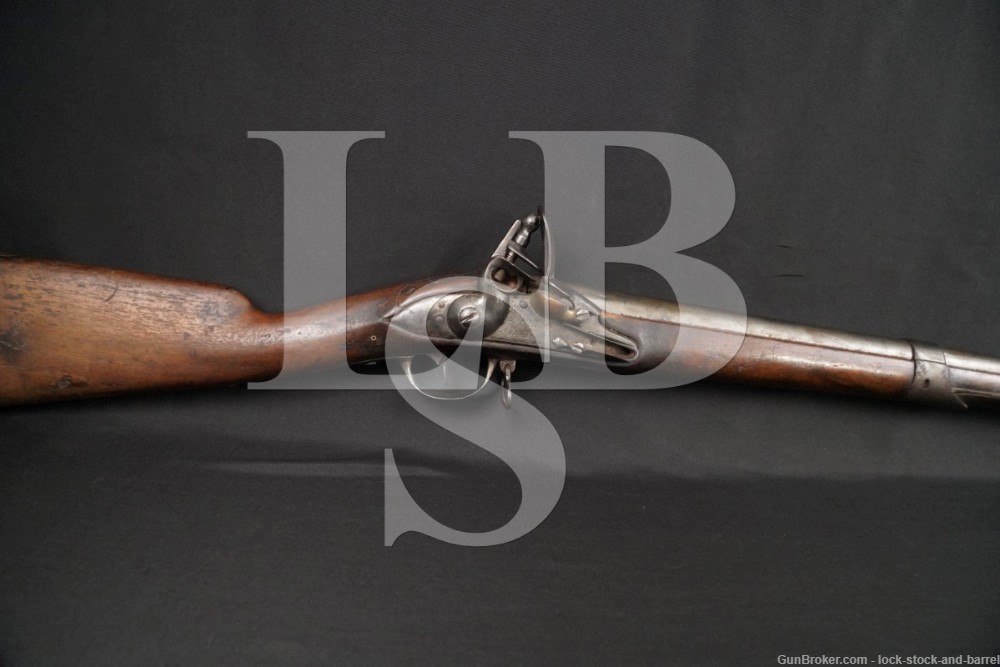 Sights/ Optics: There is a bayonet lug fixed by the muzzle. There is a brass blade fixed to the nose-cap.

Stock Configuration & Condition/ Grip: The stock is smooth wood featuring a metal nose-cap secured by a spring, a slot for the included ramrod, two barrel bands secured by springs, a lock-plate, a side plate, a straight wrist, a straight comb with a  cheek rest cut into the left side of the butt and a metal butt-plate. The stock is heavily worn.  Notably, the front of the forend, ahead of the front barrel band, has broken off the rest of the stock and there’s a crack on the front left portion of the forend that extends from the nose cap halfway to the front barrel band. Additionally, there’s a crack on the right side of the forend between the barrel bands and there’s a filled ding on the left side of the stock behind the rear barrel band. Also, the portion of the stock surrounding the chamber is heavily worn with several patch repairs with wood filler, two pins installed behind the side-plate, a crack that extends from the side-plate’s top screw to the chamber, a patch repaired chip on the right side of the forend between the top tang and lock-plate which is secured by several screws, a light crack behind the lock-plate and some moderate wear between the butt and butt-plate. Finally there are scattered moderate nicks and compressions on the belly and toe. The LOP is 13.25” from the trigger to the rear end of the butt-plate. The butt–plate is coated in oxidation and moderate handling wear. Overall, the stock is in Poor condition for an Antique.

Overall Condition: The musket retains about 3% of its finish. The brass pan still retains some brass polish but it is mostly tarnished and coated in light surface oxidation. The other bright parts are coated in scattered patches of light surface oxidation, light handling marks, nicks and scuffs. The marking on the lock-plate remains clear. The screwheads have tool-marks but they remain serviceable. Overall, the musket is in Good condition for an Antique.

Our Assessment: This is a Libreville manufactured Fusil Charleville Modèle 1777 flint-lock musket. Libreville was a name given to muskets made at Charleville during the French Revolutionary period (circa 1792-1794) when there were efforts made to completely change the culture of France. The French Revolution broke out in 1789 with the Monarchy abolished in 1792 and King Louis XVI executed in early 1793. The new government became increasingly radical and was briefly dominated by the Jacobins under the tutelage of Maximilien Robespierre whom initiated a Reign of Terror that resulted in thousands of executions. During this period the Jacobins attempted to completely restructure French society including the establishment of a new state religion, but they began to lose political capital quickly and were ultimately overthrown during the Thermidorian Reaction of 1794. It was during this brief period that Charleville made arms that were labeled Libreville (paying homage to the revolutionary motto “Liberté, Egalité, Fraternité”) but the practice ended soon thereafter. During this period of deep social unrest France became embroiled in military conflicts with its neighbors which would persist until Napoleon’s defeat at Waterloo in 1814.

This musket comes from the chaotic early years of the French Revolution. The “Libreville” marking is rare and this is a great opportunity to acquire one of the more uncommon muskets with that particular marking. This specimen has wear consistent with a weapon that was made well over 200 years ago, but it retains its original charm and despite a damaged stock the action is still functional. This is a great option for collectors of Napoleonic-era items and Historical firearms. Good luck on your bid!