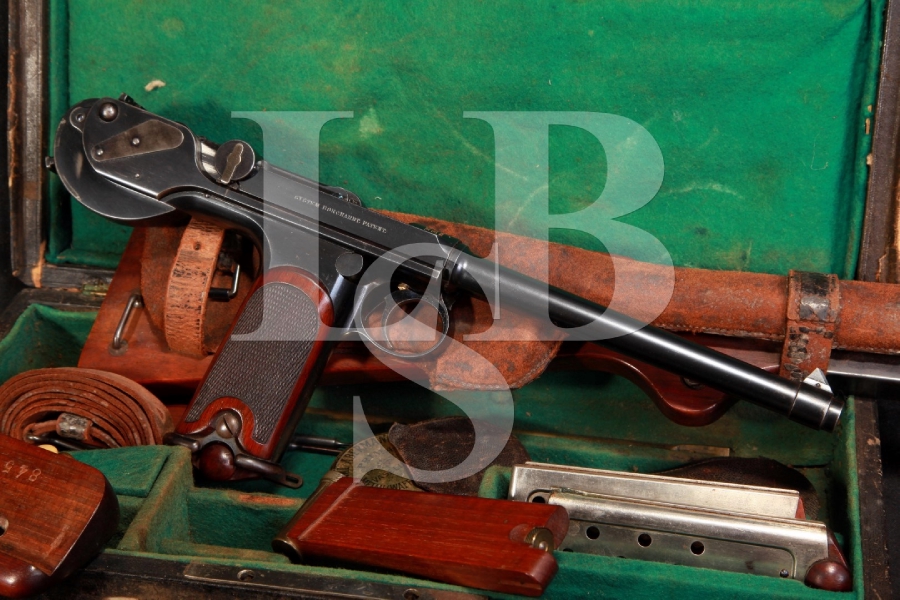 SOLD FOR:$31,550
LSB#: 141222MC01
Make: Loewe Borchardt
Model: C93
Serial Number: 845 (Found on Bottom of Magazine Well) and numerous other places on the gun and the accessories.
Year of Manufacture: 1893 – 1897 (After 1897 Production was by DWM). This one is likely 1895 +/-
Caliber: 7.65mm x 25mm Borchardt
Action Type: Single Action, Semi-Automatic Pistol with Removable Magazine and Detachable Shoulder Stock
Markings: The left side of the barrel is marked with a Crown over “B”, Crown over “G” / Crown over “U” with “172,28” beneath. The left side of the frame is marked with a Crown over ”B” / Crown over “U”. The left side of the trigger is marked “845”. The left side of the breechblock is marked Crown over “B”, and the left side of the front toggle is marked Crown over “B” / Crown over “U”. The top of the front toggle is marked “D. R. P. / NO75837.” (the patent number.) The top of the frame above the chamber is marked “WAFFENFABRIK / LOEWE / BERLIN”. The right side of the frame is marked “SYSTEM BORCHARDT. PATENT.” The rear portion of the magazine is marked with the serial number “845” as is the rear of the spring box. All serial numbers found are matching, including magazines and stock.
Barrel Length: about 7 ½”
Sights / Optics: The front sight is a triangular blade pinned to the barrel band. The rear sight is full-width adjustable leaf with a tiny “V” notch.
Stock Configuration & Condition: The grips are checkered walnut. The grips rate in about Fine overall condition, perhaps Excellent as antique. There is corresponding wear marks on the panel from storage in the case – these wear marks are perfectly consistent with the wear marks on the case. It is the kind of wear we like to see, because we know the case and the pistol have been together forever.
Type of Finish: Blue, with fire blue / straw small parts
Finish Originality: Factory Original
Bore Condition: The bore is between bright and gray and the rifling is clear. There is some very light frosting throughout the bore.
Overall Condition: This handgun retains about 97% of its metal finish. Many of the sharp edges show thinning and the spring box shows thinning on the right side and the rear from attaching the shoulder stock a handful of times. The toggle’s bolt also shows thinning. There is a straw colored spring on the right side of the toggle and small parts throughout show clear straw color with light patina forming. The screw heads are sharp but show light signs of use. The markings are clear. Overall, this handgun rates in about Excellent condition antique.
Mechanics: The action functions correctly. We did not fire this handgun. The gun is literally smooth as glass.
Box, Paperwork & Accessories: This pistol comes with the original Factory Case (a $5.00 option in the 1890s.) It is complete as shown on pages 65 and 66 of “Pistole Parabellum” vol. 1, by Gortz and Sturgess with the following exceptions: the magazine that resides in the pistol is absent (what would be the fourth magazine and this set only has three), the two screwdriver blades, the screw-on slotted tip for the large cleaning rod, and one of the two small bars used to tighten the small cleaning rod sections. These are insignificant parts and the major parts are included – 3 magazines, shoulder stock and holster, strap, cheek piece, screwdriver handle, oiler… The shoulder stock, its cheek piece and the three magazines are all serial numbered to the pistol. The case has preserved the accessories well, all wood and metal remaining in Fine condition, while the leather has worn with lots of natural age and would probably rate in about Fair condition. The case is sound and complete, though the leather exterior shows a number of losses, and very dry/cracked leather. The case itself, though complete is also only in about Fair condition.
Our Assessment: There are a lot of features in modern guns that we take for granted. At a basic level, the design of most pistols today seems very similar. Almost everyone will make use of a magazine feeding device. This magazine is almost always loaded into the grip of the gun. The similarities also extend to the operation of the gun. Virtually every semi-automatic handgun that fires a round more powerful than .380ACP will make use of a locked breech system. But where did these innovations come from? Did different manufacturers invent them on their own? If we trace back the history of pistols, we’ll find that one gun was the “father” of all modern semi-automatic pistols – The Borchardt C93, introduced in 1893” . . . Borchardt (the man) was employed with a number of small firearms companies where he most likely came across the Maxim machine gun. The major breakthrough of the Maxim machine gun was its use of a toggle bolt . . . Borchardt was inspired by Maxim’s use of the toggle link (as this “knee-like” action became known). He set to design an automatic pistol using the same toggle link action; this time operating upwards instead of downwards as on the Maxim . . . In addition to the toggle link, Borchardt also devised a new way to load this pistol – the spring loaded magazine located in the handle of the gun. Over the past 120 years magazines have not evolved much from Borchardt’s early design!” (By Jeremy S on September 30, 2013 writing in the blog: “The truth About Guns”)

Wikipedia states: The Borchardt C-93 pistol was designed by Hugo Borchardt (1844–1921) in 1893. Ludwig Loewe & Company of Berlin, Germany, a manufacturer of machine tools, produced the C-93, a semi-automatic pistol that he had invented based upon the Maxim toggle-lock principle. Borchardt also developed the high-velocity bottlenecked 7.65×25mm Borchardt cartridge for the C-93. Borchardt’s assistant at the time, Georg Luger, also claimed to have influenced its design. With over 3,000 manufactured by Loewe and Deutsche Waffen und Munitionsfabriken, Borchardt C-93 was the first mass-produced semi-automatic pistol.

The pistol used a toggle lock system, which meant that when the gun fired, a two-piece arm rose and flexed as the gun recoiled, thus allowing the breech to unlock and release the empty cartridge case. The cartridge used in the Borchardt C-93 Pistol was the basis for the primary cartridge used in the Mauser C96 pistol (7.63×25mm Mauser); they have the same dimensions, but the 7.63 mm Mauser generally had a more powerful powder charge (contemporary loading data indicated it took approximately 20% more powder than the Borchardt) and is considered to be too strong to be used in a Borchardt C-93. Nonetheless, cartridge boxes from some manufacturers were marked “For Borchardt and Mauser Automatic Pistols.” The Borchardt C-93 was manufactured and sold solely in its proprietary caliber, the 7.65×25mm Borchardt.

This is a “Holy Grail” gun… It has importance, condition, rarity, desirability and the case! Detachable shoulder stocked semi automatic pistols are possibly the most desirable of all guns – be it Lugers, Colts, Walthers or Mausers – if it has a shoulder stock, everyone wants one. This is the first of the auto pistols… it has a shoulder stock… it has a case… it is serial number 845… and still has almost all of its finish. The only thing more you could ask would be the 4th mag, a screw driver tip or two and some more condition on the case. That all said, we will state with certainty that this is about the most honest and without question the nicest gun we have ever sold.