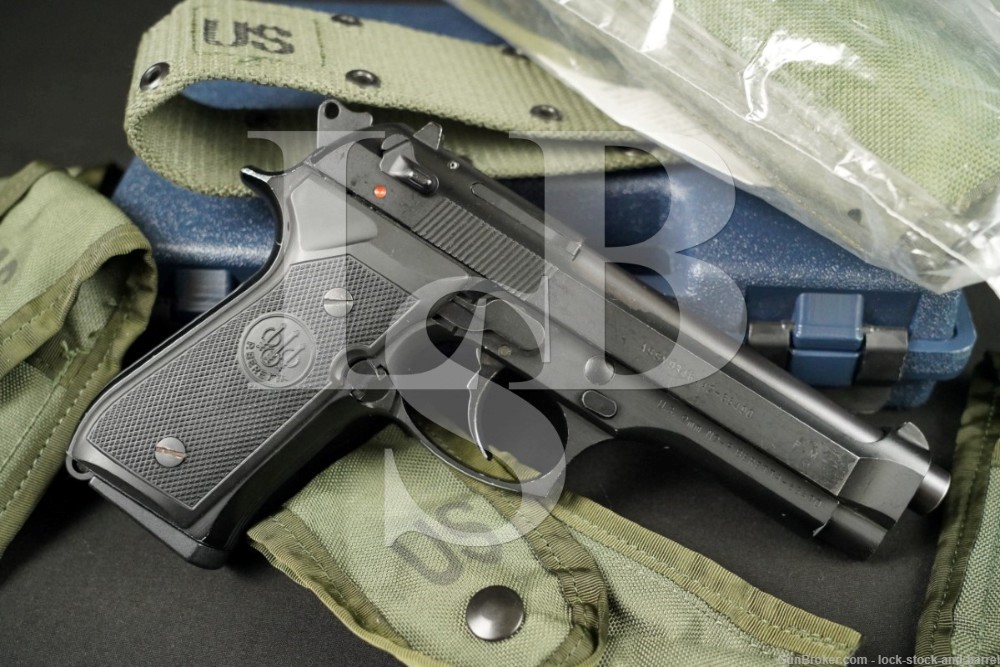 Sights/ Optics: The front sight is a blade with a recess for a white dot, but the dot has mostly worn away. The rear sight is a square notch with a white mark in the center dovetailed to the slide. Again, much of the white aiming reference has worn away under the dot.

Stock Configuration & Condition/ Grip: The grip panels are two piece checkered black synthetic. There is a lanyard ring fixed to the butt-strap. The grips have a few scattered light marks, but no notable damage. The checkering is generally sharp. There are no chips or cracks. Overall, the grip panels are in Fine-plus condition.

Bore Condition: The chrome-lined bore is bright with sharp rifling. There is no erosion in the bore.

Overall Condition: The pistol retains about 95% of its metal finish. The balance is mostly in edge-thinning and some light handling wear on the controls. The action shows light operational wear and there are a few scattered minor nicks and scuffs. The markings remain clear. The screw slots range from sharp to lightly tool marked. Overall, the pistol is in Fine condition.

Mechanics: The action functions correctly. The single-action trigger has a smooth takeup followed by a crisp break and the double-action is smooth. The slide to frame fit is snug. We did not fire this pistol. As with all previously owned firearms, a thorough cleaning may be necessary to meet your maintenance standards.

Our Assessment: The Beretta M9, the US military designation for the 92FS, is a single and double-action semi-automatic pistol chambered 9mm Luger rounds. The gun was originally adopted for service throughout the US Armed Forces in 1985 and has only recently been replaced by a striker-fired offering from Sig Sauer. The M9 has seen service in well over 100 operations and has a record of operational excellence. While many 92-series pistols have been produced for the commercial market, and many for the military, few of the military pistols have crossed over for civilian collectors of military handguns. This is one such example, from the collection of author Kevin Williams, best known for his exceptional work on the topic of General Officers Pistols & Clandestine Organization Pistols of WWII. The markings on this pistol indicate that it was one of the earlier models which was either made in Italy or assembled in the United States from Italian made parts. Despite its military pedigree and the long services life of the M9, this example is in quite good condition, making it an ideal example for the collector. Given that the M9 has been replaced and the future of existing pistols with respect to the surplus market is unknown, odds are good that the value of a military purchased M9, especially one with a nice rig such as is included with this pistol, will only continue to improve. This is one Beretta you do not want to miss out on!