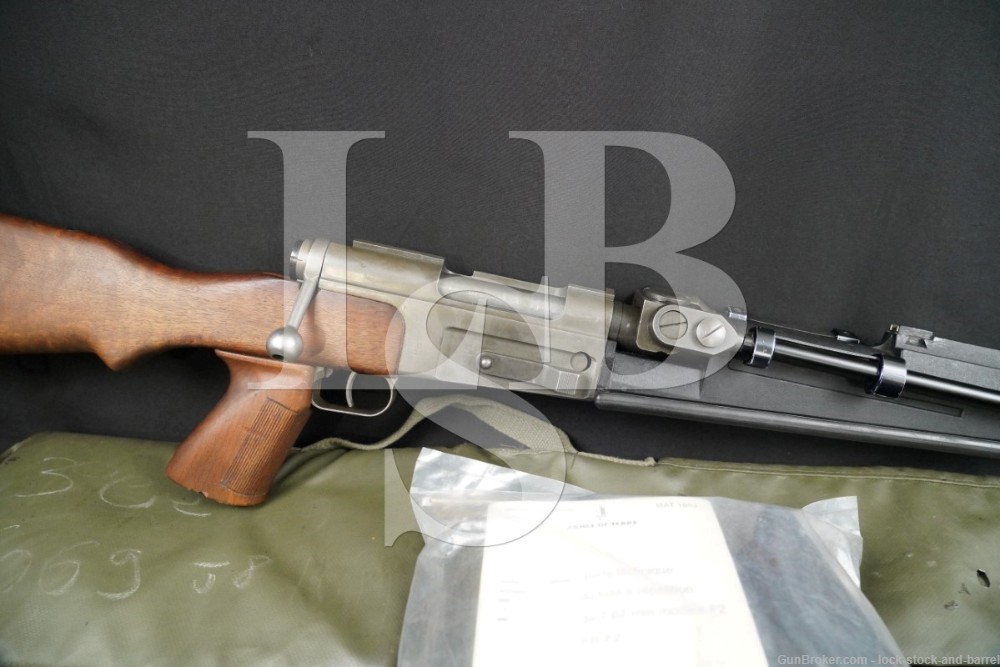 Year of Manufacture: 1986 Barrel Date.
This rifle was originally produced as an FRF1 Sniper between 1965 and 1975. FRF1 rifles were upgraded to FRF2 configuration beginning in 1984.

Barrel Length: Approximately 24 inches.
Approximately 26 inches to the end of the adjustable and tunable muzzle device. The flash ports and barrel harmonics can be adjusted.
The rear of the barrel has the bipod collar hanging from it. The collar  rotates so that the rifle can be aimed in multiple directions.

Sights / Optics: The top of the receiver has a 3 part proprietary mount machined into it.
The black polymer handguard is topped with night sights. These are backup sights. The front sight is a post with an aiming reference. The rear sight has a square notch between 2 aiming references. The aiming references glow when charged by exposure to light but dim quickly.

Stock Configuration & Condition: The stock is made up of a wooden buttstock and a black polymer forend. The buttstock has a serrated pistol grip and hard plastic recoil pad. The recoil pad can be removed to install the wooden spacer that is included in the auction. The top of the butt has 2 holes to secure the removable cheek pieces that are included in the auction. The black polymer handguard is a heat shield designed to conceal the barrel’s heat from early thermal imaging. It comes with a rubber bottom protector so that the rifle can be rested on a hard surface. The top of the butt shows several small holes. The bottom of the grip is missing small edge chips. The butt also shows scrapes & scratches. The right front of the handguard shows a small scrape that has damaged a small portion of the surface. The handguard also shows scuffs & light scrapes. The LOP measures 13 1/2 inches from the front of the trigger to the back of the buttplate. The stock rates in about Very Good Plus overall condition.

Bore Condition: The bore is bright. The rifling is sharp & deep. There is no erosion.

Overall Condition: This rifle retains about 96% of its metal finish. The metal shows scuffs & light scrapes. The scrapes are more prominent on the muzzle device. The barrel shows light scrapes under the handguard. The bottom of the receiver shows thinning on the edges of the magazine well. The screw heads show use. The markings are deep. Overall, this rifle rates in about Very Good Plus to Fine condition.

Box, Paperwork & Accessories: The rifle is stored in a green rubberized field carry bag that is padded to protect the scope. It is marked with the last 5 digits of the rifle’s serial number in permanent marker. It is also marked in chalk. The chalk markings are faded. The front of the bag has 6 drain holes. Velcro along the bottom holds the rifle in place. The bag shows soiling and discoloration. The velcro shows some use. Overall the carry bag is in Very Good Plus condition.
The rifle was imported by Navy Arms with a bag of accessories. We did not open the bag and individually view the items as this reduces the value of the rifle for many collectors. These items are in the condition they were in upon importation. This is what the importer lists in the accessory pack at NavyArms.com :
Accessory Pack: Includes bi-pod, sling, two (2) magazines, 2-pocket mag pouch, two (2) stock spacers, two (2) cheek piece risers, take-down tool, barrel pull-thru with brass lead, take-down tool/pull-thru carry pouch, oil bottle, field bag and field manual.

Our Assessment: The French FRF2 is an upgraded version of the earlier FRF1 sniper rifle which was initially chambered in 7.5x54mm French. Starting in 1984 many FRF1 Sniper Rifles were upgraded to FRF2 configuration which included conversion to 7.62×51 NATO.
We were able to hand select a Rare French FRF2 Sniper Rifle directly from Navy Arms. Navy Arms purchased the entire stock of decommissioned FRF2 sniper rifles from the French Government and is the only importer of these Rare Sniper rifles. Prior to Navy Arms importing these FRF2 Snipers they were not available.
This Rare French Sniper Rifle has a number of unique features. The stock can accept a spacer and different cheek pieces. The top of the receiver has a 3 part proprietary mount machined into it. The adjustable bipod legs attach to the barrel next to the receiver allowing the barrel to remain free floated while the rifle is aimed in multiple directions. The black polymer handguard is a heat shield designed to conceal the barrel’s heat from early thermal imaging. The adjustable and tunable muzzle device allows the flash ports and barrel harmonics to be adjusted.
This rare rifle looks impressive and has a strong & bright bore. It will make a nice addition to any military collection. The rifle comes with a number of accessories including 2 magazines and a carry bag. You can take this rifle out to the range as is or you can add a scope. Either way this French FRF2 will turn plenty of heads at the range.
Good luck.