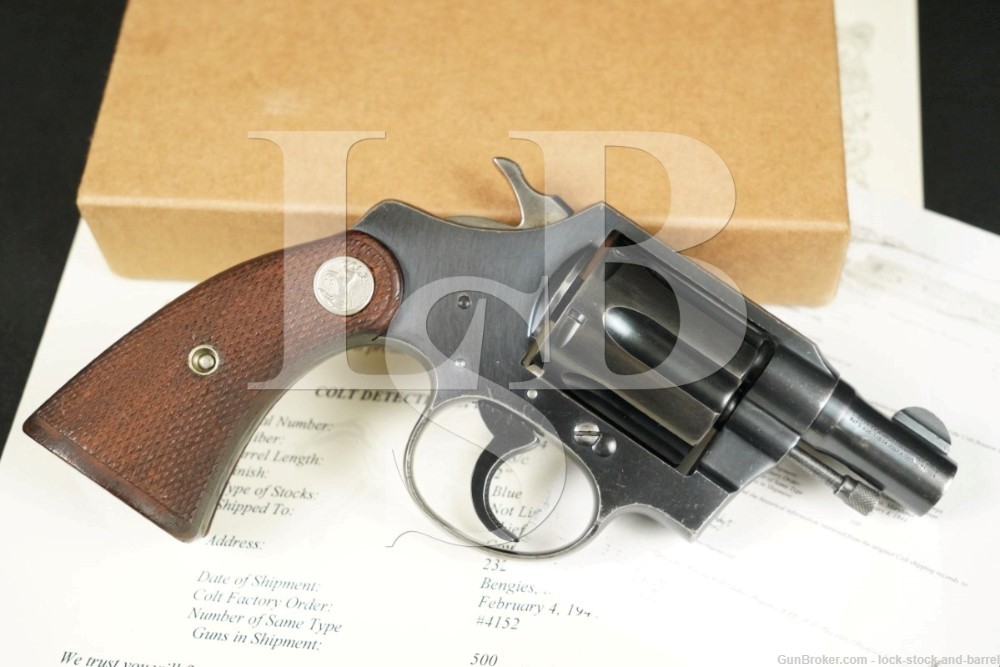 Stock Configuration and Condition: The grips are two-piece checkered walnut with silver colored Colt medallions at their tops. The grips have a few light nicks and scuffs with some wear in the checkering at the edges. The checkering is generally well defined. There are no chips or cracks. Overall, the grips are in Very Good-Fine condition.

Finish Originality: Most remaining finish is Original. Worn areas of the grip straps and cylinder have been touched-up with cold blue.

Overall Condition: This revolver retains about 87% of its metal finish. The grip straps and the outside of the cylinder show wear which has been touched-up with cold blue. The finish is thinning at all edges. There are some scattered minor nicks, scuffs and scratches. The action shows light operational wear. There are infrequent spots of minor surface oxidation. The screw heads range from sharp to lightly tool marked with strong slots. The markings are clear. Overall, this revolver is in Very Good condition.

Box, Paperwork, and Accessories: This revolver comes in a two-piece cardboard craft box with hand-written label and a Colt Archive letter confirming that this revolver shipped in its present configuration on February 4, 1944 to the Chief of the Counter Intelligence Corps in Bengies, Maryland as one of 500 guns of the same type in the shipment.

Our Assessment: The Detective Special had been very popular with law enforcement and civilians who carry a concealed revolver as it allowed for a six-shot revolver in the same frame size as other revolvers which only offered a five-round capacity. This example is a little more interesting, having been shipped to the Counter Intelligence Corps during WWII.

The CIC was responsible for a number of duties. Domestically, they provided security for the Manhattan Project, investigated sabotage, subversion and disloyalty allegations, and performed background checks on military personnel who were to be given access to classified information. In Europe and the Pacific, CIC personnel were responsible for interrogating POWs, collecting information on enemy units and movement, countering stay-behind networks as the Allied forces advanced, even serving as interim government figures in cities and towns until a permanent local government could be established.

It’s not clear whether this example stayed stateside or went overseas, but it was delivered just a few months before the D-Day invasion, which would have needed quite a few CIC agents involved. This revolver also comes from the collection of author Kevin Williams, best known for his exceptional work on the topic of General Officers Pistols & Clandestine Organization Pistols of WWII, a nice bonus for collectors of these types of handguns. Good luck and happy bidding!