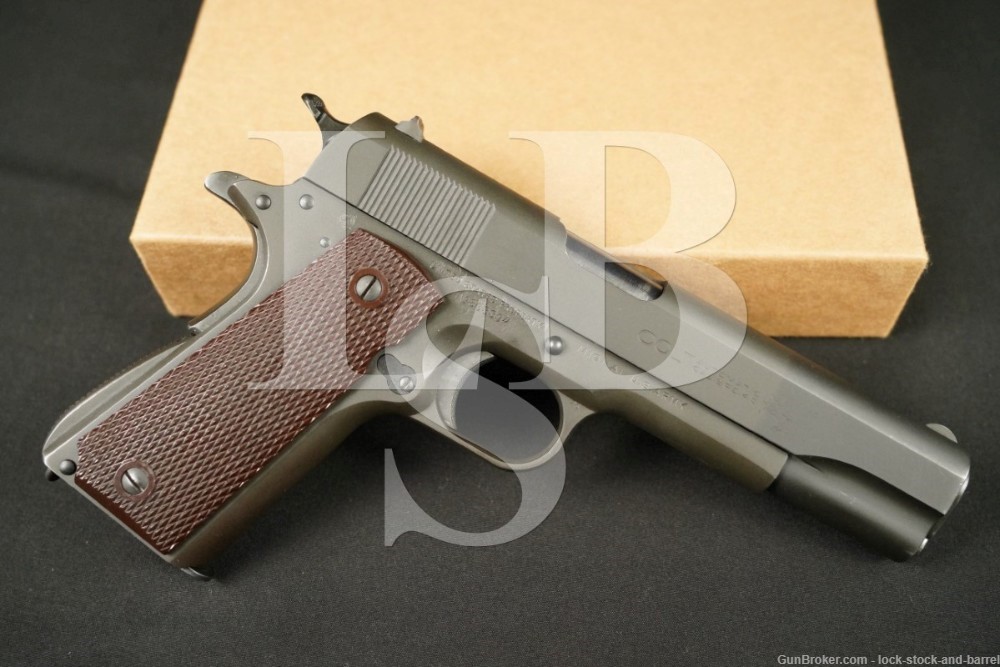 Stock Configuration & Condition: The grips are two-piece checkered brown “Coltwood” plastic with reinforcement ribs on the inside and large reinforcing rings around the grip screws. The grips have no notable wear or damage, only light handling marks. The checkering is sharp. There are no chips or cracks. Overall, the grips are in Excellent condition.

Overall Condition: This pistol retains about 97% of its metal finish. The finish is generally strong throughout. There is a faint “idiot mark” under the slide stop and also an arc-shaped scratch on the left from the slide from improper installation of the slide stop. The action shows light operational wear. There are a few othet scattered minor marks. The screw heads are sharp. The markings are generally clear, the ordnance wheel is incomplete, as is common. Overall, this pistol is in Fine condition.

Mechanics: The action functions correctly. The trigger pull is crisp. There is light play between the slide and frame. This pistol has manual and grip safeties. Typical of the Commercial/Military pistols, the slide and frame are cut for a Swartz safety, but the mechanism is not installed. We have not fired this pistol. As with all used firearms, a thorough cleaning may be necessary to meet your maintenance standards.

Box, Paperwork & Accessories: This pistol comes in a two-piece cardboard craft box with hand-written label and a single 7-round magazine marked “COLT / .45 AUTO” on the floorplate. The magazine has light operational wear, intact feed lips and a strong spring.

Our Assessment: The 1911 and 1911-A1 pistols served the military of the United States from 1911 to 1985, through two World Wars and the Korean and Vietnam wars. They gained a reputation as a reliable handgun with plenty of stopping power, and are held in high regard by those who have used them. This example is a particularly interesting specimen, a Commercial/Military 1911A1.

By October of 1942, there was a huge need for more 1911A1 production and Colt’s had several thousand unsold Commercial Government Model pistols in their inventory. More than 6,500 of these pistols were transferred to their military contract. The commercial serial markings were ground off (somewhat crudely), the Swartz safety mechanism was removed, the blued finish was removed and the pistols were parkerized, and their commercial walnut grips were replaced with Coltwood plastic panels. Interestingly, while the frames’ markings were altered to match other 1911A1 pistols and military inspection marks were applied, the converted pistols’ slides retained their commercial markings. At this time, the slides were still serialized, so it’s nice to know that this example still has its original slide, too!

Not only is this a fairly scarce variant of the 1911A1, this one comes from the collection of author Kevin Williams, best known for his exceptional work on the topic of General Officers Pistols & Clandestine Organization Pistols of WWII.  It will make a nice addition to a Colt or WWII small arms collection for the lucky winner. Please see our photos and good luck!