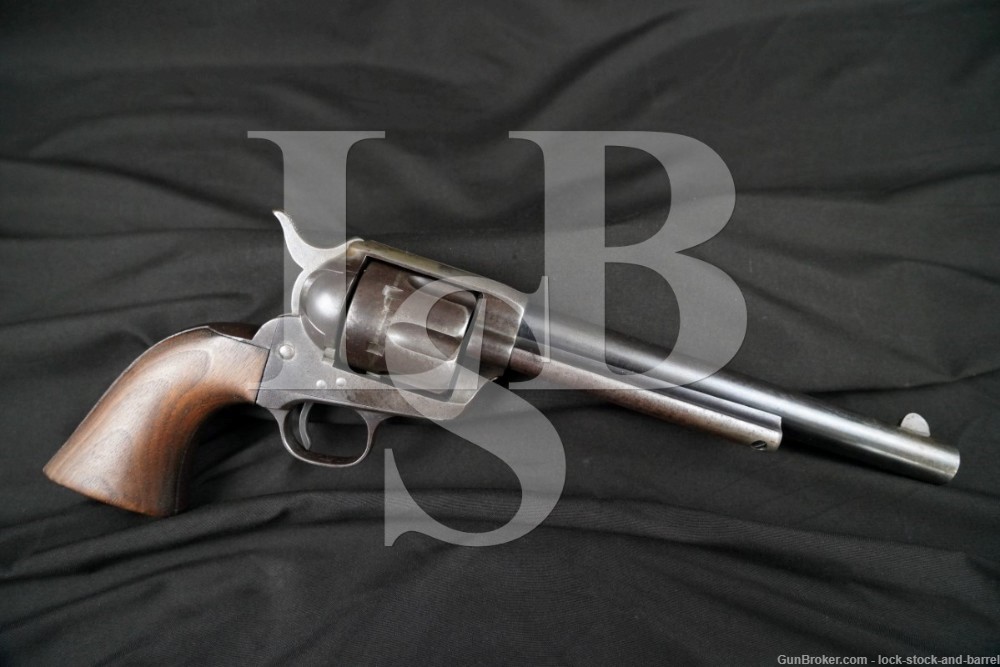 Sights / Optics: The front sight is a thin quarter-round blade fixed to the barrel, it appears to be a replacement or has been re-installed. The rear sight is a “V” groove in the top strap.

Stock Configuration & Condition: The grip is a one-piece smooth walnut. The grip has a few scattered minor nicks and scuffs. There is a thin, short crack at the top on the right. There are tiny chip-losses at the bottom-front corners on each side. Overall, the grip is in Very Good condition as refinished Antique.

Finish Originality: The barrel has been touched up around the front sight and the rear of the topstrap has been similarly touched up. Other metal finish appears Original.

Bore Condition: The bore is mostly bright with sharp rifling. There is some light erosion at the muzzle and in the right of the bore about mid-way.

Overall Condition: This revolver retains about 15% of its metal finish. The barrel and ejector housing have scattered remaining blue finish, mottled with wear and areas gone to a light patina. The barrel has wear and discoloration around the front sight, some light erosion at the muzzle, but there is good finish on the rear face and in the flutes. The frame’s case color has mostly muted or gone to a light patina with some good color on each side in front of the cylinder, in the loading slot and in the hammer slot. The rear of the topstrap appears to have been polished and treated with cold blue in the distant past. The grip frame has mostly gone to a light-moderate patina. The outside of the cylinder has mostly gone to a light patina, the rear face still has some good blue. There are some scattered light nicks, scuffs, scratches and spots of minor surface oxidation. The action shows operational wear including a turn-line on the cylinder. The screw heads range from sharp to tool marked with strong slots. The markings are generally clear, some show wear and the frame’s “U.S” marking was applied over the “5” at the bottom-right of the patent marking. Overall, this revolver is in Very Good condition as partially refinished Antique.

Our Assessment: Colt’s Single Action Army is, perhaps more than any other, an iconic American pistol. It was the U.S. issue sidearm for the last two decades of the 19th century, used by pioneers, outlaws and lawmen across the expanding nation, and captivated audiences on the silver screen and television (and still does, today). This example retains strong mechanics, a great bore for a revolver that would have seen use with black powder more than 130 years ago, and has matching serialized parts, though the grip’s marking has been lost to time. There is some remaining original finish with touch-ups around the front sight (repaired or replaced) and on the topstrap. The markings are in good shape and the mechanics are strong. This example was produced just as the patent markings changed, with the later two-line patent marking. Overall, this is a nice example of a Model 1873 Cavalry revolver, perfect for adding to your Colt or US Military small arms collection. Please see our photos and good luck!