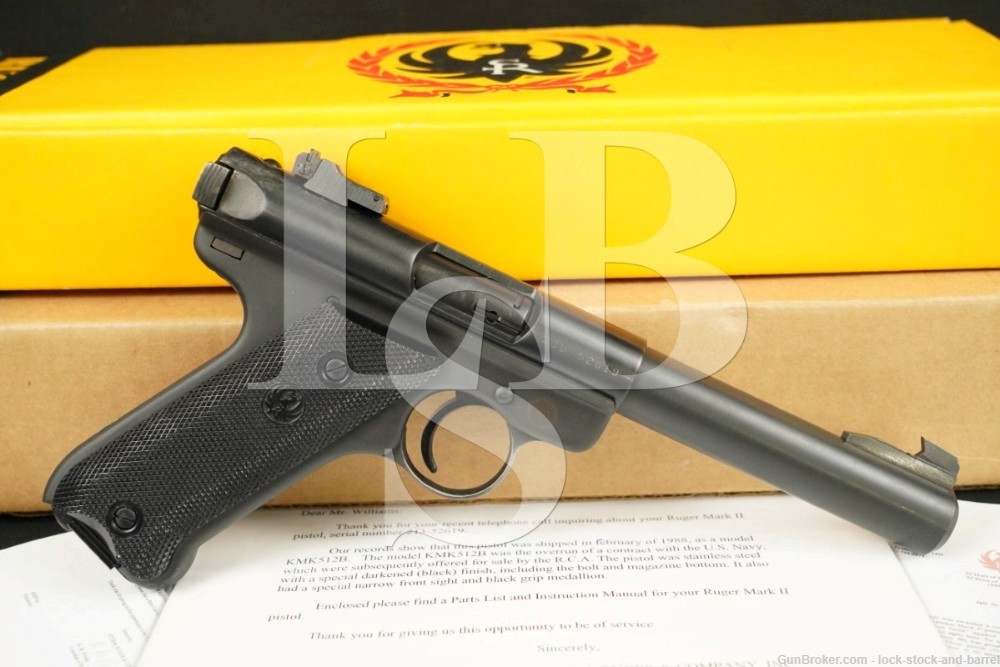 Sights/Optics: The front sight is an under-cut blade integral to a base screwed to the front of the barrel. In addition to the finish, the Navy contract called for a thinner, 0.25″ front sight base. The rear sight is a square notch adjustable for windage and elevation in a base dovetailed to the receiver.

Stock Configuration and Condition: The grips are two-piece checkered black plastic with a black Ruger eagle logo integral to the right panel. The grips have no notable wear or damage, only light handling marks. The checkering is sharp. There are no chips or cracks. Overall, the grips are in Excellent condition.

Type of Finish: Made of Stainless Steel, the Navy contract called for a darkened (black) finish. The receiver appears to be a Blued Stainless Steel, while the bolt, barrel and grip frame have a Black Phosphate appearance.

Overall Condition: This revolver retains about 90% of its metal finish. Most of the balance is in scattered light wear on the top-left of the receiver and on the trigger guard. There are a few other scattered minor marks and light thinning at some edges. The action shows minor operational wear and there is some light handling wear on the tapered ears of the bolt. The screw heads are sharp. The markings are clear. Overall, this pistol is in Very Good-Fine condition.

Mechanics: The action functions correctly. We did not fire this pistol. As with all previously owned firearms, thorough and consistent cleaning may be necessary to meet your maintenance standards.

Box, Paperwork, and Accessories: This pistol comes in a black and yellow cardboard Ruger box with cardboard shipping sleeve, a single 10-round magazine and a series of documentation including a Ruger factory records letter, Ruger Collector’s Association letter and an RCA article about the KMK-512B pistols.

Our Assessment: Today, Ruger makes more firearms in America than any other company, but it all started in 1949 with Bill Ruger’s Standard Model. A simple, reliable rimfire semi-automatic, the Standard Model would go on to spawn the now-ubiquitous MK series of pistols. Many young shooters learned to shoot handguns on a MK series, they are well represented in all manner of shooting sports, and they’re just darned fun plinkers!

There has also been some military interest in the pistols. Mark I Target models were procured for handgun marksmanship training of Post and Organizational Station Pistol Teams and some were even equipped with suppressors for use by “tunnel rats” in vietnam. The Mark II Target was purchased as the T678G Government Model for use in handgun marksmanship training. There was also a smaller contract for 500 pistols with the U.S. Navy in 1987. There is less documented (or at least published) information about the purpose of these pistols, but the special features requested on the contract do give some hints.

First, the pistols were to be constructed of stainless steel, but they were to have a dark finish on all parts, including the trigger and bolt. The Ruger logos on the grip and magazine were also to be black, instead of the standard Red. Finally, and perhaps most interesting, the contract specifically requested a front sight base 0.25″ wide. A thinner or wider blade could be a preference related to marksmanship, but a preference for the width of the base strongly indicates something being mounted to said base. The contract being from the Navy and the features requested have led many to conclude that the contract was for Navy Seals.

While we may never know exactly what purpose the Navy had for these 500 pistols, we do know that there were 84 contract over-run pistols which were not made available for general public sale, but rather sold by the Ruger Collector’s Association to their members. While the original contract pistols were categorized as the KMK-512N, the over-run pistols received the model designation KMK-512B, and this is one of those 84 guns. Not only is this a particularly rare piece for collectors of Ruger or rimfire pistols in general, it also comes from the collection of author Kevin Williams, best known for his exceptional work on the topic of General Officers Pistols & Clandestine Organization Pistols of WWII. This is a rare opportunity, not one you want to let pass you by. Good luck and happy bidding!