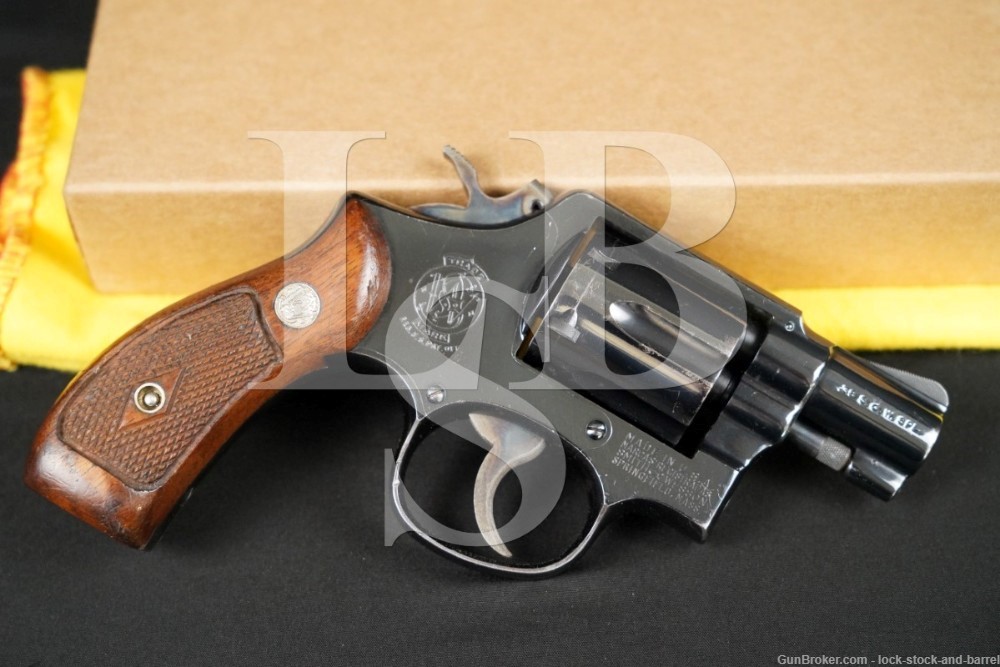 Sights / Optics: The front sight is a fixed serrated ramp blade forged to the tapered solid rib on the barrel. The rear sight is a square notch milled into the top strap.

Stock Configuration & Condition: The grips are two-piece checkered walnut Magna stocks with S&W medallions at their tops and smooth diamonds. There are some scattered compressions, dings through the finish, and some nicks, some of the most noticeable are on the bottom faces and on the back of the left panel. There are a couple hairline scratches, the most noticeable is on the front of the left panel. The checkering is mostly strong. Overall, the grips are in about Very Good condition.

Mechanics: The action functions correctly. The cylinder locks up well on each chamber with light side-to-side play. The single-action trigger is crisp and the double action is smooth. We did not fire this handgun. As with all used firearms, a thorough cleaning may be necessary to meet your maintenance standards.

Box, Paperwork & Accessories: Included is a photocopy of a Smith & Wesson letter and a brown storage box.

Our Assessment: The Model 10 was a staple of police departments across the country for decades. Its K-frame, 6-shot capacity and, of course, Smith & Wesson quality making it an ideal service revolver. Over 6,000,000 of the type have been produced over the years, making it the most popular centerfire revolver of the 20th century. There were many variations made, some are still being produced today! This one comes from the collection of author Kevin Williams, best known for his work on the topic of General Officers Pistols & Clandestine Organization Pistols of WWII. This one is an Air Force contract pistol from an 8900 unit shipment that got sent to Warner Robins AFB in Georgia. The gun was shipped in September 1960, 5 years into the Vietnam War. In July of 1959 the first U.S. soldiers were killed in Saigon when their living quarters were raided by guerillas and in September of 1960, the same month this gun was shipped, Ho Chi Minh was replaced by Le Duan as the head of the communist party. With things heating up and a new party leader, it is likely that the U.S. forces wanted ample supply of weapons for our own forces, as well as for aid to RVN units, to be prepared for any course of action that was taken by the communists. With the markings on the grip frame we would not be surprised if this gun saw service over its lifetime. This is a piece of history and if guns could talk we wonder what this one would have to say. Please see our photos and good luck!