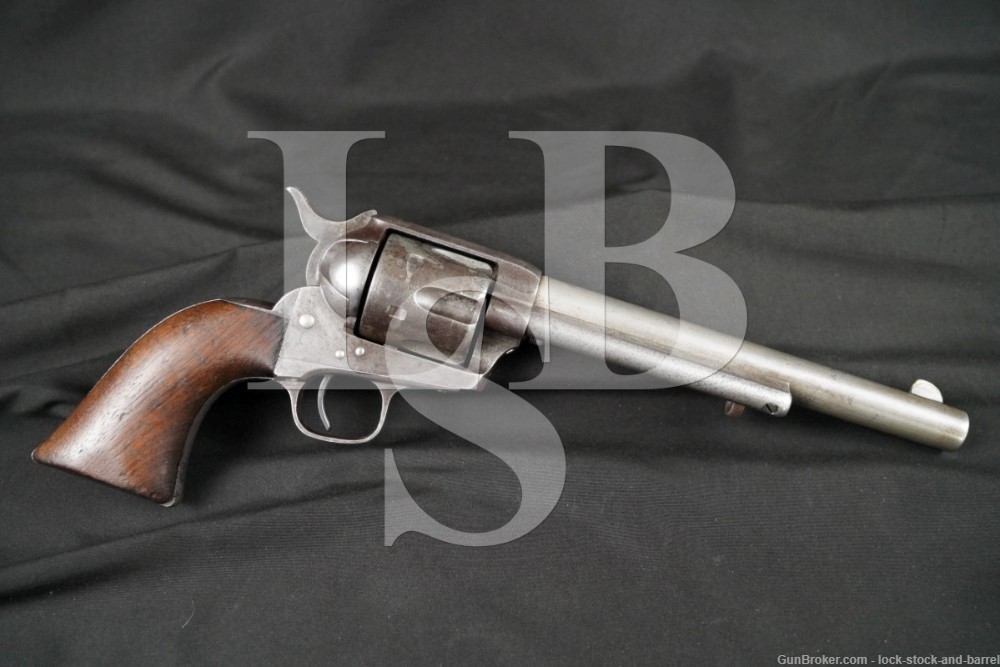 Markings: The top of the barrel is marked “COLT’S PT. F. A. MFG Co. HARTFORD. CT. U.S.A” with the lettering running from the frame toward the muzzle (see Our Assessment). Under the ejector housing, there are small “C” and “S” markings near the ejector mounting lug and at the frame is “7557”. The outside of the cylinder is marked “7557”. The bottom of the frame at the front, the bottom of the trigger guard at the front and the butt are each marked “37557”. The hammer slot is marked “P”. The left of the frame is marked “PAT. SEPT. 19. 1871. / ” JULY. 2. -72 / ” JAN. 19. -75.” and “U.S.” (the U.S. marking is not genuine). The rear face of the loading gate has “1231” assembly number. The left-rear of the frame, covered by the grip, is marked “E”, the rear of the frame is also marked “B” and “S” over the left and right backstrap mounting screw holes, respectively. The backstrap inlet of the grip had a hand-written serial marking, but it is worn and not legible. The left of the trigger guard is marked “45 CAL”.

Sights / Optics: The front sight has been modified with a german silver tip on the blade, fixed to the front of the barrel. The rear sight is a “V” groove in the top strap.

Stock Configuration & Condition: The grip is a one-piece smooth walnut. The grip has some scattered light nicks, scuffs and scratches. Each side of the grip has a patch of more notable wear at the bottom edge which has been smoothed out and there are a couple of more notable dings at the bottom edges. The right side has a tiny chip-loss at the bottom-front corner which has been smoothed out. There are no cracks. Overall, the grip is in Very Good condition as refinished Antique.

Finish Originality: The barrel appears to have had its finish intentionally removed. Otherwise, the finish appears Original

Bore Condition: The bore is light gray. The rifling is sharp where not interrupted by erosion. There is scattered light erosion and infrequent pitting in the bore.

Overall Condition: This revolver retains about 5% of its metal finish. There is a little bit of blue finish in protected areas such as the corners of the trigger guard, on the ejector housing next to the cylinder pin head, and on areas of the grip frame covered by the grip. The frame and hammer’s case color has mostly muted or gone to a light patina, with a little bit of color visible in protected areas. The barrel appears to have had its finish intentionally removed at some time in the past. There is some scattered light surface oxidation and minor erosion. There is a patch of chemical erosion on the outside of the cylinder between two flutes and behind one of them. There are some scattered light nicks, scuffs and scratches with tool marks around some screw heads. The action shows operational wear including turn wear on the cylinder. The screw heads range from sharp to tool marked with strong slots. The markings are clear. Overall, this revolver is in Very Good condition as Antique.

Our Assessment: Colt’s Single Action Army is, perhaps more than any other, an iconic American pistol. It was the U.S. issue sidearm for the last two decades of the 19th century, used by pioneers, outlaws and lawmen across the expanding nation, and captivated audiences on the silver screen and television (and still does, today). This example retains strong mechanics, a nice bore for a revolver that would have seen use with black powder more than 130 years ago, and has matching serialized parts, though whatever was written in the grip’s backstrap inlet has been lost to time.

This revolver’s “U.S.” marking is not genuine, having been applied to give the revolver the appearance of a Model 1873 Cavalry revolver, but it was originally a commercial Single Action Army. It is rather interesting, though, as the barrel address is marked backward, with the lettering running toward the muzzle rather than toward the frame. The barrel address style is similar to that used on the Richards-Mason conversions, with wedge-shaped periods instead of square dots. The backward barrel address on this revolver matches up with a photo in the Kopec & Fenn book “Cavalry & Artillery Revolvers” of a revolver close in serial number to this one showing this Richards-Mason style marking, right down to the short serif on the base of the “P” in “PT.” as well as the missing period at the end of “U.S.A”.

Any of the 1st Generation Single Action Army revolvers are collectible, and this example’s rare barrel address marking may help collectors overlook the spurious U.S. markings. An opportunity like this doesn’t come by every day, so please see our photos and good luck!