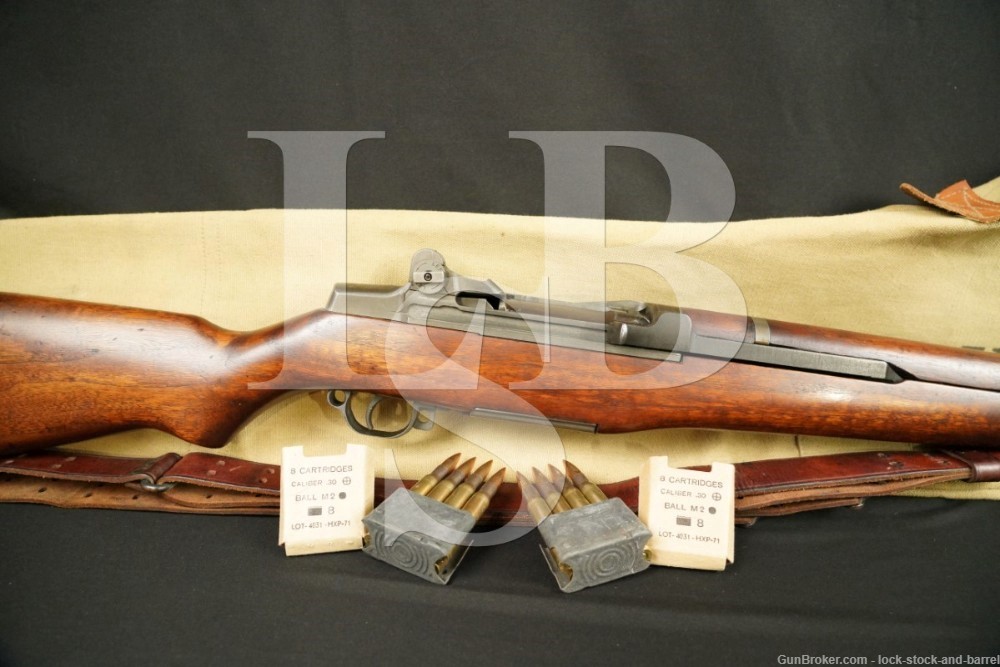 Stock Configuration & Condition: The face of the grip is marked with a “circled P” proof. The left side of the stock, above the trigger, is marked with a “cross cannons” cartouche and a Springfield inspector’s cartouche “S.A. / EMc.F in a box”. The inspector’s cartouche has been restamped. The hardwood stock has a pistol grip, metal nose caps, a stacking loop, two sling loops, and a metal buttplate with hinged door for storage in the butt. The buttplate shows several small scratches as well as discoloration from oxidation. The left side of the butt shows a filled surface crack. The wood shows several scrapes, scratches and compression marks. The most prominent marks are on the left side below the receiver. Most of these marks have been oiled. The LOP measures 13 ? inches from the front of the trigger to the back of the buttplate. The stock rates in about Very Good Plus overall condition.

Bore Condition: The muzzle and grooves are semi bright. The rifling is deep. There is fouling in the grooves which should clean up a bit. There is erosion at the muzzle. The bore shows an M.E. of 1.8. The throat shows a T.E. of 3.

Overall Condition: This rifle retains about 87% of its metal finish. The metal shows scattered scrapes and scratches; more prominent on the gas tube and bottom metal. The bottom of the receiver has pin prick surface erosion showing through the new finish. Some is bleeding through the finish causing discoloration. The barrel shows paint residue on the front as well as scrapes & thinning at the rear. The metal shows oil residue. The receiver and bolt show light operational wear. Most of the markings are deep. Overall, this rifle rates in about Very Good Plus condition.

Box, Paperwork & Accessories: The rifle comes with an unmarked leather sling, canvas soft case, cleaning gear and with 2 loaded ammo clips. The soft case marked “US” on the front and “TWEEDIES / 1943” on the interior. The markings on the full clips included “CALIBER. 30 / BALL M2 / 8”.

This Springfield Armory M1 Garand was originally built back in 1943. It has since been rebuilt but still uses all Springfield parts. This M1 Garand looks impressive and has a good bore. It comes with a soft case, sling, cleaning gear and 2 full clips of ammo. It will add to your WWII collection and would make you smile out at the range. Good luck.