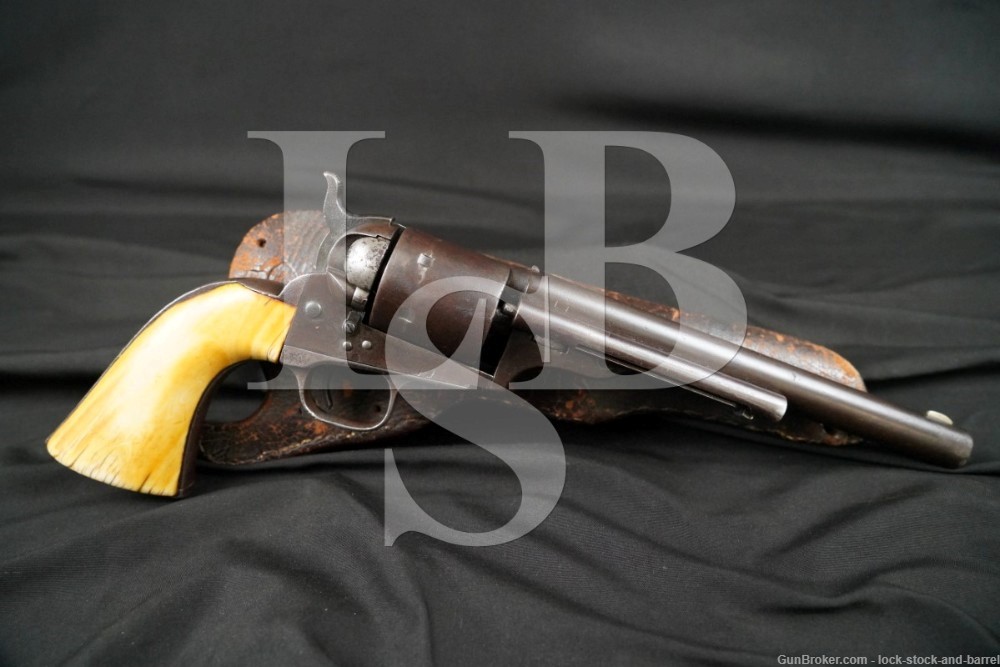 Markings: The top of the barrel was marked “-ADDRESS COL SAMl COLT NEW-YORK U.S. AMERICA-“, the marking is mostly worn away. The left of the frame is marked “-PAT. JULY. 25. 1871.- / -PAT. JULY. 2. 1872.-“. The bottom of the barrel, the frame, and the backstrap are each marked “4691”, the cylinder arbor is marked “691. The markings on the outside of the cylinder are nearly completely worn away, but on close inspection, “691” can be made out. The wedge is marked with an incomplete brand name and appears to have been fabricated from a Nicholson hand file.

Sights / Optics: The front sight is a german silver blade fixed to the barrel. The rear sight is a “V”-notch integral to the rear of the barrel.

Stock Configuration & Condition: The grip is a one-piece style constructed of two Antique ivory panels with wood spacers glued together. The grip shows deep, distinct grain lines and discoloration from age and handling. There is a minor loss at the rear edge of the right panel toward the top at an area of particularly dark discoloration. There is some dark residue around the edges. Otherwise, there are only a few scattered minor marks. Overall, the grips are in Fine condition as Antique.

Finish Originality: We suspect that the missing markings are from honest wear, not from a refinishing. The wedge is not original to the gun. No finish remains.

Bore Condition: The bore is dark gray with well defined rifling. There is scattered light-moderate erosion and pitting in the bore.

Overall Condition: This pistol retains about 0% of its metal finish. The surfaces have gone to a fairly even moderate-dark patina, lighter in the grip areas due to handling wear. There is some scattered light surface erosion with some more notable erosion in the grip straps. There are scattered light nicks, scuffs and scratches with a cluster of more notable nicks on the barrel under the wedge. The action shows operational wear. There are firing-pin marks on the rear face of the cylinder, but the firing pin is intact. The screw heads range from sharp to disfigured with serviceable slots. The markings range from clear to worn away. Overall, this revolver is in Good-plus condition as Antique.

Mechanics: The action functions correctly. The cylinder locks up with little play on each chamber. The barrel has no play to the frame. The trigger is crisp. We did not fire this pistol. As with all used firearms, a thorough cleaning may be necessary to meet your maintenance standards.

Our Assessment: The latter half of the 19th century saw incredible developments in firearms technology, as various types of self-contained cartridge arms and repeating arms were invented. Some manufacturers and gunsmiths took advantage of the large supply of percussion revolvers, converting them to use cartridges. Colt’s was no exception, with their most notable conversion types being the Thuer, Richards and Richards-Mason conversions. There was one more stop on the way to the introduction of the Single Action Army, and that is the 1871-1872 Open Top revolver. This model used the same barrel and ejector as earlier conversions, but was designed from the ground-up as a cartridge revolver, not a conversion. The model was submitted to US Army trials, and the suggestions from the trials would be incorporated into the design of the Single Action Army. That model’s adoption by the US Army in 1873 along with substantial commercial success led to production of only about 7,000 1871-1872 Open Top Revolvers, making them quite scarce in general. This example shows honest wear consistent with its age, and looks quite attractive with its Antique ivory grip. It will make a prized addition to a Colt and early cartridge revolver collection. Please see our photos and good luck!