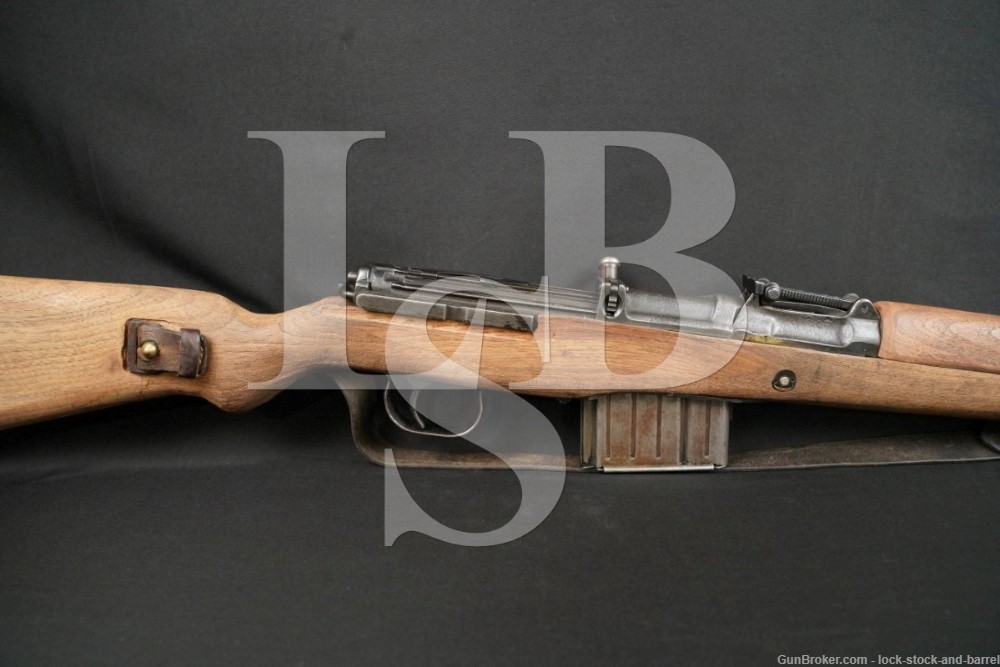 Sights / Optics: The front sight is a tall bladed post set atop a serrated ramped blase and under a removable protective hood. The rear sight is a “V” notched sliding escalator marked from “1-12”. The right side of the receiver has integral rail for an optic.

Stock Configuration & Condition: This is a replacement stock. The nosecap and nosecap retaining spring are roughly manufactured non-German replacements. The nosecap may be glued in place. The noscap is stuck on the rifle, we did not try to force it off. This stock does not have a hole for a cleaning rod. There are no cutouts in the butt under the storage door.
The wood stock has a pistol grip, ventilated handguard, metal nosecap with sling bar, through bolt, sling well with pass through and a metal buttplate with hinged door for storage. The buttplate extends beyond the edge of the butt at the top. The buttplate and nosecap show scratches, discoloration and light surface erosion. The wood shows scrapes & scratches. The bottom of the butt is missing surface wood at the buttplate. The grip shows tool marks. The top of the butt has been sanded. The LOP measures 13 3/8 inches from the front of the trigger to the back of the buttplate. The stock rates in about Very Good overall condition.

Bore Condition: The bore is gray and the rifling is deep. There is erosion in the bore. It is more prominent in the grooves.

Box, Paperwork & Accessories: The rifle has a leather sling attached. The rifle comes with one ten round magazine. It shows scrapes, scratches, and discoloration from oxidation. It is in Good to Very Good condition.

Our Assessment: The German Gewehr 43 (G43) was later designated as the Karabiner 43 (K43). This German G43 was made in 1944 by Walther. It has been dropped into a replacement stock that uses a roughly produced non-German nose cap & retaining spring. It has distinctive markings along the receiver and can still do plenty of work at the range.
The G43 has a much improved gas system (borrowed from the Russians) and is much more reliable than its predecessor the G41. This rifle will add to any collection, especially a WWII collection. Good luck.