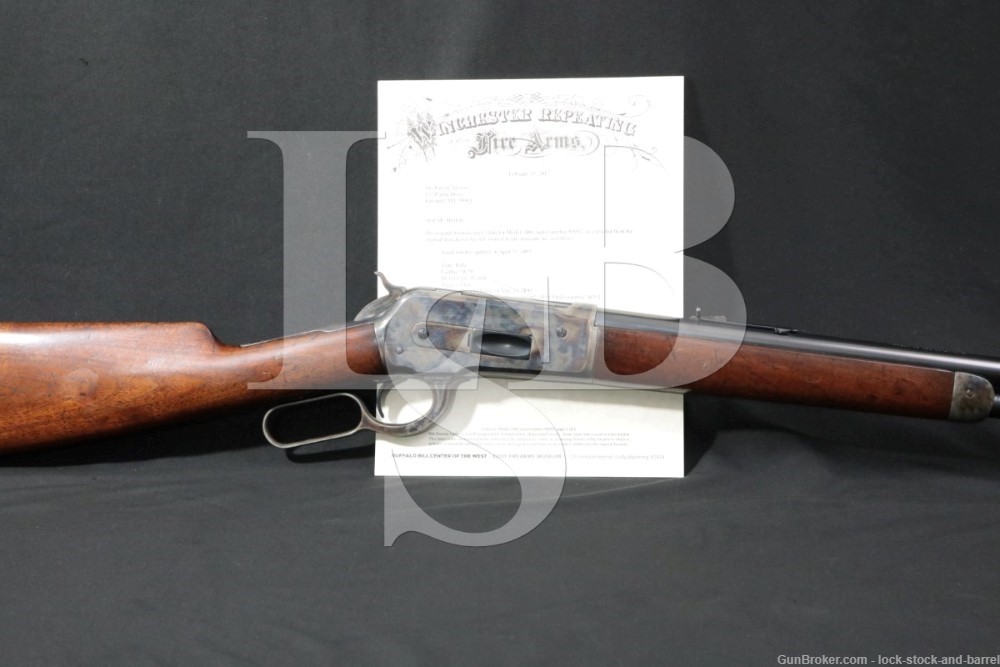 Stock Configuration & Condition: The stocks are two-piece smooth walnut with capped forend, straight grip, straight comb and steel crescent buttplate. The stocks have some scattered minor nicks and scratches with a few more notable marks, most finished over. There is some odd wear in the finish on the left of the forend. There are no chips or cracks. Overall, the stocks are in Fine-Excellent condition as refinished Antique.

Finish Originality: This rifle has been professionally restored.

Bore Condition: The bore is mostly bright with sharp rifling. There is infrequent minor erosion in the bore. Based on the appearance at the muzzle and breech, as well as the condition of the bore, we believe it has been re-lined.

Overall Condition: This rifle retains about 96% of its current metal finish. The finish is generaly strong throughout with the most notable wear being light scratching on the magazine tube which has discolored from oxidation. There are a few other scattered minor marks and infrequent minor surface oxidation. The receiver shows streaking common to Winchester receivers of this era. The receiver has very minor surface erosion under the finish, but retains brilliant case color. The screw heads range from sharp to lightly tool marked. Most markings are clear, the caliber marking has been re-cut and the patent marking on the bottom tang is worn and incomplete. Overall, this rifle is in Excellent condition as restored Antique.

Box, Paperwork & Accessories: This rifle comes with a Cody Firearms Museum letter confirming that this rifle had its serial number applied in April 25, 1895, was received in the warehouse May 14, 1895 and shipped from the warehouse September 2, 1899 on Order number 36753 in its current configuration.

Our Assessment: Winchester’s first attempt at a lever action rifle capable of handling a rifle cartridge was the Model 1876, which was a heavier framed version of the Model 1873. However, the toggle-link action used in the gun was still limited to short cartridges like the .40-60 and .45-60 Win, its development rushed to ensure that the new model was out in time for the American centennial. The Model 1886 was designed by John Moses Browning to handle longer cartridges like the .45-70 Govt., the .45-90 Win. and .50-110 Win. cartridges. The Model 1886 utilized a locked-bolt action that was much stronger than the M1876, and some seem to think it is faster and smoother as well. The Winchester Model 1886 was touted as a lever action express model, capable of handling any of the North American game animals. This rifle is chambered in .38-70 Winchester, a cartridge based on a necked-down .45-90 Win., not a .45-70. The cartridge was introduced in 1895, the year this rifle was made, and stayed in production until 1918. According to “Winchester Lever Action Repeating Firearms Volume 2” by Arthur Pickle, only 830 M1886 rifles were chambered in this caliber, making it the 2nd rarest caliber used in the M1886 after the .40-70 Win. This rifle’s rarity is further enhanced by its round barrel, a feature found on only 1 in 5 M1886s in Rifle configuration. This means that there may be fewer than 200 rifles made in this configuration! This is a fairly early M1886, made during the period when Winchester was producing the rifle with a case colored finish to the receiver, lever and nosecap. This example has been beautifully restored with deep blue and vibrant case color as well as good looking stocks. Rather than attempting to make the rifle look factory-new, the restoration appears to have intended, and succeeded quite well, at yielding a rifle with the appearance of an outstanding original condition gun. This is an extremely nice-looking rifle, so please see our pictures. With only 830 of the M1886 rifles chambered in .38-70, and the scarcity further enhanced by its round barrel and confirmed with a factory records letter, this rifle is extremely rare, and we suspect the collectors are going to be very interested!