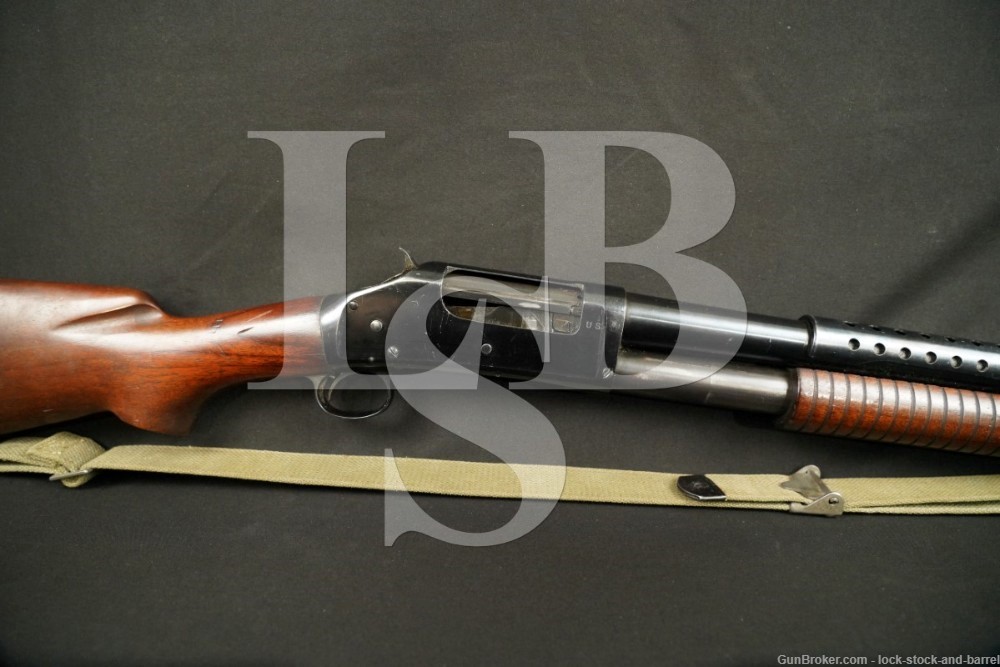 Stock Configuration & Condition: The stocks are walnut, the slide handle is grooved and the buttstock has a pistol grip and straight comb. There is a sling plate mounted in the belly and a sling swivel on the bayonet lug. There is a faint hairline crack on the bottom of the wrist at the rear of the tang. Both sides of the wrist have a hairline crack at the receiver. There are some scattered compressions, scuffs, draglines, nicks and light scratches typical of a service weapon of this age. There are some areas of oil staining. The LOP measures 13 7/8” from the front of the trigger to the back of the checkered black hard rubber buttplate. The plate has a chip loss at the toe, there are some scattered little nicks, scuffs, and light scratches but the checkering and lettering are well defined. The stocks rate in about Very Good overall condition.

Overall Condition: This shotgun retains about 85% of its metal finish. There are scattered nicks and scratches, some of the most noticeable are on the receiver. There are some scattered spots of oxidation, some of the most noticeable are on the left side of the receiver at the rear. There are some scuffs that have thinned the finish and there is some thinning on the edges, most noticeable on the leading edges of the barrel and heatshield. The magazine tube has some areas of patina. There is some standard operational wear. There are a few streaks on the right side of the receiver where the finish is plum. The screwheads display tool marks with serviceable slots. The markings are clear. Overall, this shotgun rates in Very Good condition.

Our Assessment: After observing the Great War for the first three years, it became clear to the U.S. that serious close-range firepower was needed in trench warfare. The Model 1897 Trench grade was an evolution of this idea. The pre-existing Winchester Model 1897 was modified by adding a perforated steel heat shield over the barrel which protected the hand of the user from the barrel when it became over-heated, and an adapter with bayonet lug for affixing an M1917 bayonet. They were so effective and brutal in combat that the German high command once announced they would execute any US soldier captured with one in his possession. The 1897 Trench Gun would go on to see service in the second World War all the way through to the Gulf War. In 1944 it became apparent to the U.S. that while there were available shotguns, many were not in acceptable condition. The guns had either been acquired under blanket procurement and were not the proper type, saw abnormally hard use and were not properly maintained, and others had just been in use for too long due to there not being replacements available. The military deemed that many of the weapons were in need of a major overhaul and initiated a factory service program with Ithaca, Remington, Savage, and Winchester which included riot guns. We think that this is one that was overhauled at the Winchester factory, the proofs and “U.S.” markings look good and there is evidence of the original markings from before it got overhauled. This example has some scattered wear but has a good bore, great mechanics, and nice markings. This is a nice military 97 that will be tons of fun to shoot at the range and will be a nice addition to your collection. Please see our photos and good luck!