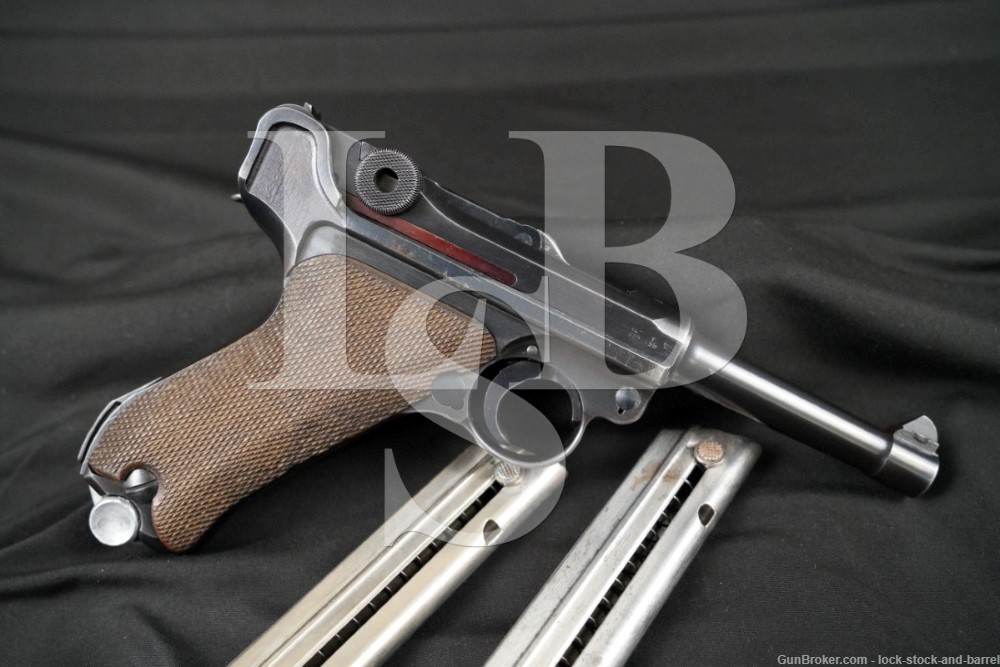 Stock Configuration & Condition/ Grip: The grip panels are two-piece checkered wood. The grip panels have light handling marks, nicks and scuffs. Notably, the panels have some scattered patches of black discoloration on the panels. The checkering remains mostly sharp. There are no chips or cracks. Overall, the grips are in Very Good condition.

Overall Condition: The pistol retains about 85% of its metal finish. There are scattered light handling marks, nicks and scuffs on the gun’s metal surfaces. Notably, there is finish loss along the leading edges and some light wear around the muzzle. The markings remain clear. The screw-heads are unmarred and serviceable. Overall, the pistol is in Very Good plus condition.

This particular Luger was manufactured in 1941 two years into the Second World War. It would prove to be the most decisive year of the conflict, on June 22nd, 1941 a German led coalition invaded the Soviet Union and initially made massive inroads into Soviet territory. The Red Army took massive losses in the early months of the invasion, millions of Soviet soldiers were taken prisoner (where they would be starved to death by their captors) and the German military appeared poised to capture Moscow by the end of the year. What Hitler and his High Command had not foreseen was a massive Soviet counteroffensive. On  December 5th, under the leadership of General Giorgy Konstantinovich Zhukov, Red Army units which had been stationed in the Far-Eastern portions of the Soviet Union were transferred to Moscow and launched a masterful counterstroke which repulsed the German advance and secured the imperiled capital of the Soviet Union. Also, following the Japanese attack on Pearl Harbor, Germany declared war on the United States which only further complicated Germany’s position. The pistol’s markings are consistent with army issued small arms manufactured in 1941. From April of 1940 German companies were ordered to mark war material with codes instead of using their names. This was done to prevent the enemy from ascertaining information about German production from captured equipment. Mauser used the code “byf” on its output from that point until the end of the conflict. Despite some light handling wear the gun remains aesthetically pleasing and it is both an ergonomic and mechanically sound option. Aside from the magazines, the gun appears to be in its original configuration as all the parts are serial matched. If you are a fan of German military arms and WWII history then this is the handgun for you. Good luck on your bid!