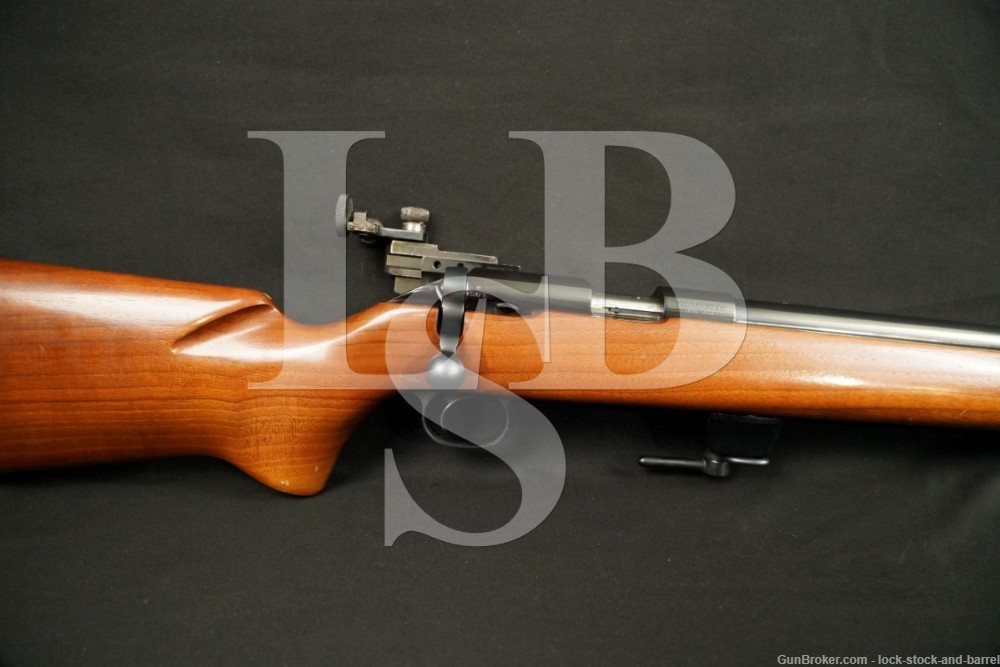 Barrel Length: 28?, Tapers from approximately 1.05? at the receiver to approximately 0.860? at the muzzle. This is a Heavy Target barrel for the 52.

Sights / Optics: The front sight is a Redfield Olympic globe sight with a post insert, it is attached to a male dovetail style base that is screwed to the barrel at the muzzle. The rear sight is a Redfield Olympic aperture peep sight mounted on a base that is screwed to the left side of the receiver. There are two pairs of drilled, tapped, and filled holes on the top of the barrel. The top of the receiver has two pairs of empty drilled and tapped holes.

Stock Configuration & Condition: The stock is a one-piece smooth walnut with a pistol grip, straight comb, and serrated black rubber Winchester buttpad. The forend has an inlet 13 1/4?  accessory rail. The stock has a sling swivel at the front of the rail and there is a black plastic handstop installed on the rail. There are some scattered little dings, compressions, scuffs, and a few light scrapes. Some of the most noticeable marks are on the bottom of the forend. There are no chips or cracks. The LOP measures 13 5/8” from the front of the trigger to the back of the buttpad. The pad shows light wear. The stock is in Fine overall condition.

Overall Condition: This rifle retains about 97% of its metal finish. There are a few little tiny marks on the receiver. There are some little spots of dark discoloration on the bolt and on the muzzle from previous oxidation. There is standard operational wear. There are a few little scuffs and light marks on the barrel. There are light handling marks. The screwheads are sharp to lightly worn. The markings are clear. Overall, this rifle rates in about Fine Plus condition.

Our Assessment: The Winchester Model 52 was a bolt-action .22-caliber target rifle introduced by the Winchester Repeating Arms Company in 1920. For many years, it was the premier small-bore match rifle in the United States, if not the world. Known as the “King of the .22’s,” the Model 52 has been called by Winchester historian Herbert Houze “a perfection in design”. The Model 52 was finally discontinued in the 1980s because it was costly to manufacture, and its popularity had wained to expensive European rifles. The Model 52 underwent several changes over its life, and although different model names were not advertised, and the barrel markings remained the same, letter suffixes were added to the serial number to designate significant design changes. Considered one of the greatest of all time American 22 rifles, Winchester continued to market and produce the Model 52 for decades. It is such a beloved favorite that Winchester continued to manufacture this rifle at a loss to the company during its final years. Evolving from a first-class general target rifle into a precision tool that represented the United States in world competitions, the Model 52 is a classic design that belongs in your collection. So, bid on this beauty and enjoy!