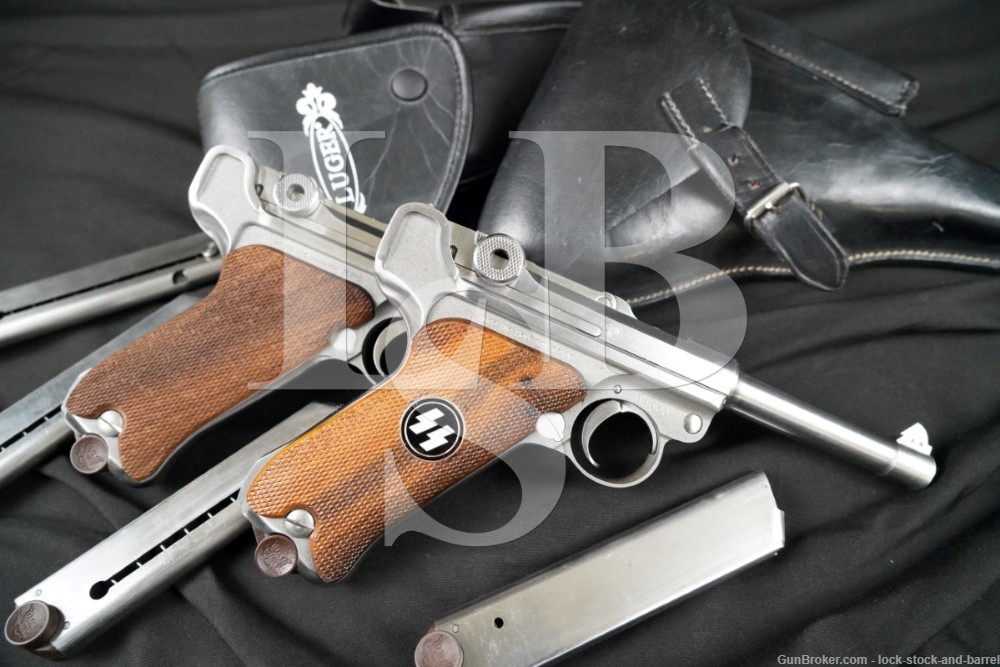 Markings: Aside from the serial number, the markings on both pistols are the same. The left side of the frame is marked “LUGER / REG. US PAT. OFF.” The right side of the frame is marked “AIMCO INC. HOUSTON TEXAS” and feature’s the serial number is “S4686” on GC061 and GC062’s is “S4687”. The right side of the slide is marked with the Stoeger logo and “STOEGER IND. AMERICAN EAGLE / CAL. 9MM LUGER”. The top of the chamber ring is marked with the Great Seal of the United States (an Eagle with a shield). The safety notch coloring is mostly faded on GC061 with some residual red paint remaining and it has worn off entirely on GC062. The grip panels are plain except the right panel on GC061 which features the Schutzstaffel logo (two lightning bolts).

Stock Configuration & Condition/ Grip: The grips on both pistols are two piece checkered wood panels. The grip panels on GC061 have been varnished and can not be removed from the frame without risking damage to the pistol. The grips on both pistols have light handling marks and lack any notable defects. There are no chips or cracks. Overall, the grips are in Fine condition on both guns.

Bore Condition: The bores on both pistols are bright and have sharp rifling. There is no erosion in either bore.

Overall Condition: The pistols both retain about 95% of their metal finishes. The pistols both have some light handling marks, but they lack any notable defects. The markings remain clear. The screwheads on both pistols have light tool marks and remain serviceable. Overall, the two pistols are both in Fine condition.

Mechanics: The action on both guns works correctly. We did not fire these pistols. As with all previously owned firearms, a thorough cleaning may be necessary to meet your maintenance standards.

Box Paperwork and Accessories: The two pistols come with a total of six magazines original to the Stoeger pistols. The magazines have standard markings and only light handling marks. Overall, all six magazines are in Fine condition. Also included is a Black leather holster made for the pistols by Stoeger with a pouch for a magazine, a detachable flap secured by velcro on the back end and a button to secure the front end of the flap. The Stoeger holster has some light handling marks and remains in Fine condition. Finally, there is a WWII style black leather Luger Holster featuring a flap secured by a strap with three notches, a magazine compartment and two two belt loops. The rear end of the holster is marked with a NSDAP style Eagle clutching a swastika and “P.08”. The holster has some light handling marks, but it remains in Very Good condition.

This is a pair of modern reproductions of Georg Luger’s exceptional P.08 handgun which were manufactured by Aimco and distributed by Stoeger. In 1924 Stoeger obtained the American patent for the “Luger” brand name used on parabellum pistols imported into the United States. From the 1960s through the 1980s Stoeger manufactured a series of Luger style handguns which proved popular commodities on the market. These guns, despite nearing the Luger name, were not true P.08 parabellum pistols, they differed mechanically from the original despite sharing a similar aesthetic. In 1991 Aimco, a Texas based company, manufactured these fantastic handguns which are incredibly well made replicas of the Luger P.08, and unlike Stoeger’s prior “Lugers” these remain largely true to Georg Luger’s brilliant design. Stoeger distributed the Texas company’s pistols which had a limited run during the 1990s and early 2000s. The aimco pistols were named the American Eagle Luger, after the Great Seal of the United States marked on the top of the guns chamber rings and on the base of their detachable magazines. These two specimens have the distinct stainless steel finish executed by Aimco on their Lugers. Additionally, these Aimco Lugers are both ergonomic and mechanically sound handguns. This pair of handguns exude quality and should prove a worthy addition to any collection. Good luck on your bid!