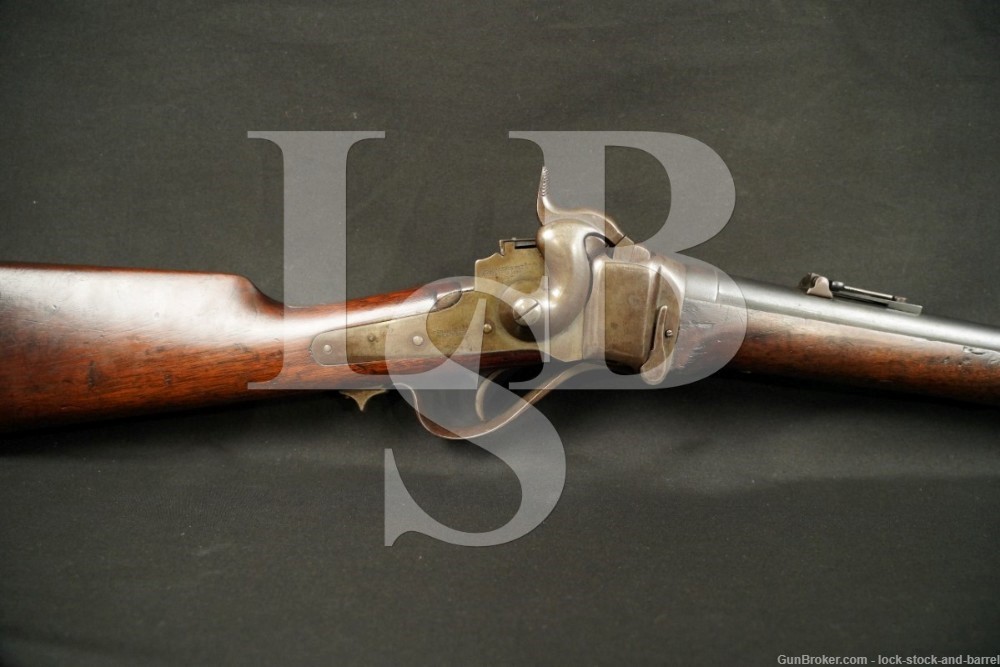 Stock Configuration & Condition/ Grip: The Arsenal Refurbished stocks are two-piece smooth wood featuring a forend that is secured with a screw and mounted with a barrel band secured by a spring, a straight wrist, a sling bar with fixed saddle ring, a straight comb and a metal butt-plate. The stocks have scattered light-moderate handling marks, compressions, dings and nicks. Notably, there are two light cracks on the left side of the wrist: one by the top leading edge and the other just under the sling bar. Also, there is a notable ding on the left side of the forend behind the barrel band. The LOP is 13.75” from the trigger to the rear end of the butt-plate. The butt-plate is in the white, has some oxidation including a patch of pitting on the top leading edges and some handling marks. Overall, the stocks are in Good condition for Antiques.

Bore Condition: The bore is mostly bright with sharp rifling. There is catered light pitting in the bore.

Overall Condition: The carbine retains about 60% of its metal finish. The majority of the case coloring has faded but the bluing on the rifle is still largely intact. The gun is coated in scattered light surface oxidation. There are scattered patches of finish loss, light handling marks, nicks and scuffs. Notably, the finish has worn off the muzzle and there are a few patches of finish loss ahead of the barrel band which have taken a patina color. The markings remain mostly clear. The screwheads have light tool-marks and remain serviceable. Overall, the carbine is in Very Good condition for an Antique.

Mechanics: The action functions correctly. We did not fire this carbine. As with all used firearms, a thorough cleaning may be necessary to meet your maintenance requirements

Our Assessment: Christian Sharps was a weapons designer who was born in 1810. He worked at Harpers Ferry early in his career and was impressed by John H. Hall’s breech-loaded rifle (the first American breech-loader which was originally built with a flint-lock system) which would inspire Sharps to develop his own breech-loader. His breech-loaded design was patented in 1848 and the first units entered production in 1850. The following year Sharps Rifle Manufacturing Company was formed, Christian Sharps served as a technical advisor to his namesake business receiving a royalty on every unit that was sold. Despite being named after him, Sharps left his namesake company in 1853 and formed a new company C. Sharps & Co. where he remained until the Civil War broke out.  In 1862, as a consequence of the Civil War, Sharps partnered with William Hankins to form Sharps & Hankins with most of the company’s production dedicated to military contracts. After the war Sharps continued to work until 1874 when he succumbed to illness.

The Sharps rifle would be put to use in Kansas during the 1850s when a series of violent clashes erupted between abolitionists and pro-slavery settlers. The rifle was popular with the abolitionists and nicknamed the “Beecher’s Bible” after prominent abolitionist Henry Ward Beecher. When the Civil War broke out both the Sharps Rifle and a carbine variant were sold to the Federal Government and issued to a number of Army and Navy units. The carbine was particularly popular, with more Sharps carbines manufactured than any other (the next two most widely manufactured were the Spencer and Burnside). They would see widespread use throughout the conflict.

This Sharps New Model 1859 Carbine survived the Civil War and was converted in a government arsenal to chamber .50-70 Govt. centerfire cartridges. The converted rifles were marked with a distinct cartouche on the left side of the butt “DFC” and all the parts were refinished as part of the refurbishment process. Also, as the stocks were refurbished with many being replaced during refurbishment. This specimen is well preserved considering how long ago it was refurbished and it remains mechanically sound. This will make a great addition to any fan of historical firearms collection. Good luck on your bid!