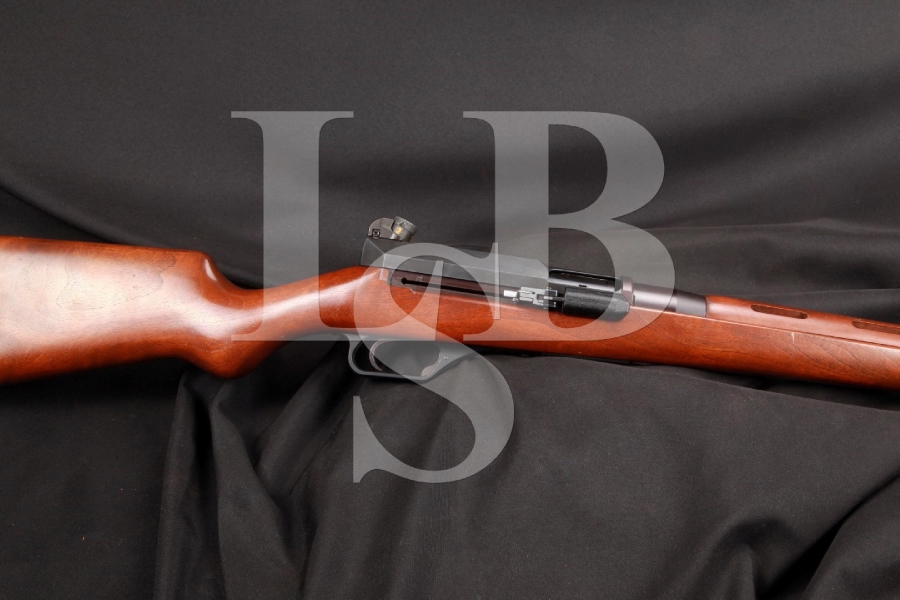 LSB#: 141128AS01
Make: Heckler & Koch (H&K)
Model: SL6
Serial Number: 08344
Year of Manufacture: 1980s; Importation in to US discontinued in 1986
Caliber: .223 Remington
Action Type: Semi-Automatic with Removable Magazine
Markings: The left side of the barrel is marked with a Winged Eagle over “N” German nitro proof and “08344”. The left side of the receiver is marked “HK Chantilly, VA”, “Heckler & Koch GMBH / Oberndorf/N Made In W-Germany”, and “Mod. HK-SL6”. The screw at the back of the trigger guard is marked “ABC / 88” and the screw at the back of the magazine well is marked “88” and with partially stamped letters. The safe position of the safety is marked with white paint and the fire position is marked with red paint. The magazine follower is marked “4” and the left side of the magazine is marked “.223”.
Barrel Length: Approximately 17 ¾”
Sights / Optics: This rifle is mounted with a four position rear sight that is adjustable for windage and a front post protected with a military style ring. The rear sight rotates to provide an open “V” notch at the first position, with peep (aperture) sights at the marked “2, 3 and 4” positions. The front post is held in with a set screw at the front of the sight and is replaceable. The top of the receiver has two rectangular recesses that make up the integral scope base.
Stock Configuration & Condition: The stock is one piece walnut with a separate walnut handguard, both with a semi-gloss finish. The stock has a pistol grip, an inlet steel side-mount sling attachment and a thick steel buttplate. The forend and handguard have a steel band at the front which includes an eyelet for a side-mount sling, and the forend is vented. The stock shows various scrapes, scratches and compression marks. The forearm, bottom and top, show the majority of the scratches and marks. The LOP measures 13 ¾” from the front of the trigger to the back of the buttplate. The stock rates in about Very Good to Fine overall condition.
Type of Finish: Matte Black
Finish Originality: Original
Bore Condition: The bore is bright with polygonal rifling. There is no erosion.
Overall Condition: This rifle retains about 95% of its metal finish. The top of the receiver shows thinning from the use of the scope base. The receiver shows light scrapes and thin light scratches. The buttplate shows scratches and an area of frosting. The screw heads are intact. The markings are deep. Overall, this rifle rates in about Fine condition.
Mechanics: The action functions correctly. We have not fired this rifle.
Box, Paperwork& Accessories: The rifle comes with one 3-round magazine that fits flush. It shows only light handling marks and is in about Excellent condition.
Our Assessment: This Heckler & Koch SL6 is chambered in .223 and is in about Fine condition. It has interesting features including an integral optic mount, a folding charging handle, a bolt release lever at the rear of the charging handle and a magazine release on the interior of the trigger guard. H&K SL6 rifles are not easy to find as they were only available in the U.S. for a short while. They were marketed to the U.S. until 1986 when they could no longer be imported. Some basics from Wikipedia: “The Heckler & Koch SL6 is a roller-delayed blowback operated sporting carbine made by Heckler & Koch. It is manufactured in 5.56×45mm caliber. The design was originally based on the HK 630 sporting rifle and is essentially a shorter-barreled version of that rifle. It was marketed throughout the world as a hunting/utility rifle. The roller-delayed blowback action is similar to that used in the G3 battle rifle and is the hallmark feature of Heckler and Koch’s pre-G36 line of small arms. The four groove barrel features polygonal rifling with a right-hand twist of 1 in 10.6 inches. The chamber is fluted with 12 longitudinal flutes extending rearward from the baffle to the chamber face. These flutes permit propellant gases to flow around the case acting as a lubricant to ease extraction. The SL6 has a diopter sighting system and utilizes Heckler and Koch’s proprietary HK 05 claw-type scope mount. Two rectangular recesses have been cut into the upper receiver to accept this mount.”