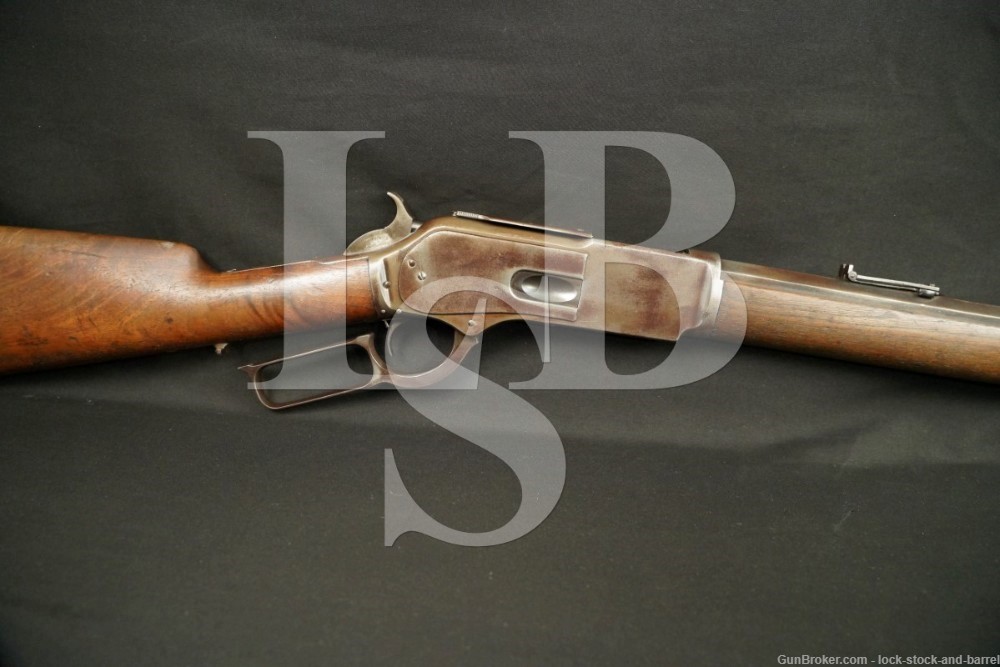 Sights / Optics: There is a slotted base dovetailed to the front of the barrel. It had a white blade of some sort which is mostly broken off. The rear sight is a folding ladder-style sight presenting a “V”-notch when folded down and with the ladder marked from “2” to “10” on the right side (the top is marked “1876”). The ladder’s slider is missing. The top tang is drilled, tapped and filled for a peep sight (none included).

Stock Configuration & Condition: The stocks are two-piece smooth walnut with capped forend, a straight grip, straight comb and steel crescent buttplate with trapdoor storage compartment (nothing in the compartment). The stocks have moderate wear with scattred dings, scrapes, scratches, a few gouges and some spots of marring. There are some minor losses along the edges and a few small cracks. The LOP measures 13” from the front of the trigger to the back of the buttplate. The buttplate has gone to a light-moderate patina with scattered wear, nicks and erosion. The stocks are in Good-Very Good overall condition as refinished Antique.

Bore Condition: The bore is semi-bright. The rifling is sharp where not interrupted with erosion. There is some scattered light erosion and spots of light pitting in the bore.

Overall Condition: This rifle retains about 30% of its metal finish. Most of the remaining finish is on the barrel, strongest on the bottom-left shoulder but there is some remaining finish on each flat. The balance of the barrel’s surface has gone to a light patina. The receiver has mostly worn to white or gone to a mottled light patina, the worn areas show treatment with cold blue. There are scattered nicks, scuffs, scratches and light surface erosion. There are tool marks at some of the screw heads. The screw heads range from sharp to slightly disfigured with useable slots. The markings are clear. Overall, this rifle rates in about Good-plus condition as Antique.

Mechanics: The lever doesn’t lock up tight, having considerable play when the action is closed. Otherwise, the action functions correctly. The bolt has a bushing around the firing pin on the breech-face. The dust cover’s rail is secured to the receiver with screws, typical of 2nd Model rifles. The trigger is set by pushing it forward until it clicks, resulting in a very light, crisp pull. When not set, the trigger is still crisp, but is heavier. Due to the single set-trigger mechanism, this rifle does not have a lever-safety. We have not fired this rifle. As with all used firearms, a thorough cleaning may be necessary to meet your maintenance standards.

Our Assessment: The Winchester Model 1876 was a heavier-framed rifle than the Model 1873, and was the first to be chambered for full-powered centerfire rifle cartridges, as opposed to rimfire cartridges or handgun-sized centerfire rounds. While similar in design to the 1873, the 1876 was actually based on the prototype 1868 lever-action rifle that was never commercially produced by Winchester. It was introduced to celebrate the American Centennial, and earned a reputation as a durable and powerful hunting rifle that was also used by the Canadian North-West Mounted Police and the Texas Rangers. Theodore Roosevelt used one on his early hunting expeditions in the West and one was found in the possession of Apache warrior Geronimo after his surrender in 1886.

Unfortunately, the 1876 lost popularity when the Model 1886 was introduced in heavier calibers. This rifle is chambered in .45-60 Win., a cartridge designed specifically for the Model 1876 rifle by shortening the .45-70 cartridge to fit the ’76 model’s action. This is a 2nd Model 1876 rifle that is in about Good-plus condition with about 30% of its original finish remaining. The rifle has a single set-trigger, a nice option which provides a great trigger pull. Despite its age, and almost certainly exclusive use with black powder, the bore is still fairly strong on this example.

The 1876 Winchester was only made for 21 years, with a total of about 63,871 made in rifle, carbine and musket formats, with the result that ALL are collectable. This example’s matching assembly numbers on the receiver, stock and buttplate as well as its set-trigger make it a nice specimen for collectors, enhanced by being a transitional model, made after the introduction of the bushing-less bolt but assembled with the original firing-pin bushing bolt. This would be a great rifle to add to a Winchester collection, placed between an 1873 and an 1886. Please see our photos and good luck!