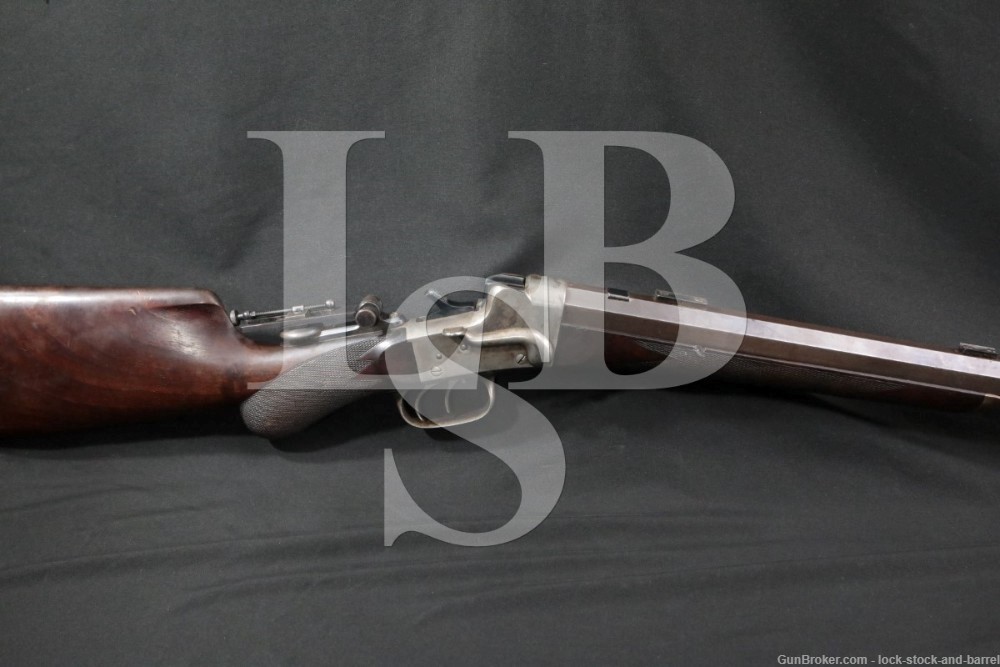 Caliber: The chamber measures approximately .32 inches but we are unsure what actual caliber the gun is chambered for. The chamber should be cast prior to firing to determine the appropriate caliber for the gun.

Barrel Length: 29.5”, Octagon to Cylinder. The barrel is not original to the rifle.

Sights/ Optics: There is a dovetailed screw-set globe style front sight with a fixed dotted post reticle. There are two male dovetails on the top of the octagonal half of the barrel and the very rear dovetail slot has a plain attachment.  The top tang is drilled and tapped with a screwed on diopter with a narrow aperture.

Stock Configuration & Condition/ Grip: The stocks which are not original to the rifle are two-piece wood featuring a checkered forend screwed to the bottom of the barrel, a checkered semi-pistol grip, a straight comb with cheek-piece and Schutzen type butt-plate. The stocks have some light handling marks, nicks and scuffs. Notably, there is a small ding on the right side of the forend, a light scratch on the left side of the wrist’s checking and a few light scuffs on the right side of the wrist. The LOP is 13.25 and 12.75 inches from the triggers to the rear end of the butt-plate. The butt-plate has some light handling marks and the brass finish has been removed. Overall, the stocks are in Very Good condition.

Finish Originality: Refinished with the exception of the barrel

Bore Condition: The bore is semi-bright with sharp rifling. There is light erosion in the bore.

Overall Condition: The rifle retains about 35% of its metal finish. The barrel’s finish has worn off and it is coated in light surface oxidation, it now has a patina color. The brass has been largely removed from the butt-plate and there is some light surface oxidation on the forend cap and a little bit on the frame. There are also some light handling marks, nicks and scuffs. Notably, the barrel has wear along its leading edges and the barrel has a few prominent scuffs along the cylindrical half. The markings remain clear. The screwheads have tool-marks but they remain serviceable. Overall, the rifle is in Very Good condition for a refinished Antique.

Mechanics: The action functions correctly. We have not fired this rifle. As with all previously owned firearms, a thorough cleaning may be necessary to meet your maintenance standards

Our Assessment: This is a custom Remington-Hepburn Match Rifle which was originally manufactured between 1883-1907. Although the action was manufactured by Remington, the barrel and stocks are aftermarket additions. We are unsure what the caliber of the rifle is but we measured the bore at approximately .32 inches, but we recommend having the bore cast to confirm the caliber prior to firing the gun. This gun is based on a design concocted by Lewis L. Hepburn, the Superintendent of Remington’s mechanical department and member of the Creedmore International Shooting Team, who patented the design in 1879. The gun proved a popular target rifle and a number of variants were introduced before it was pulled from the market at the beginning of the 20th century. This gun is not in its original configuration but it remains a nicely crafted target rifle that should prove a fun addition to any Remington collection. Good luck on your bid!